My Top 10 Reasons to Retire in Panama - Living in Panama 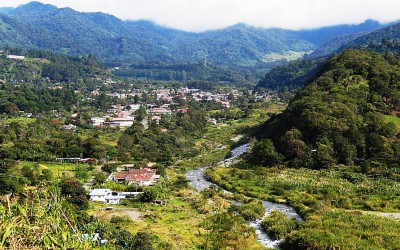 After years of research, why I chose to retire in Panama

After General Noriega’s regime ended in 1989, Panamanians decided they would never again allow a military general to become a dictator and closed down the military. They hold free Democratic elections today and are very active in the political process. Panamanians enjoy freedom of speech, press, and religion. The country is protected by a National Police force and Panama is ranked as one of the safest countries in Central America.

2) The currency is the US dollar

For Americans and others with dollars, this is just plain easy. The Panamanian Constitution forbids the government from printing paper currency. It can’t just turn on the printing presses when it wants more money (does that sound like another country you know?). The wild inflation that has plagued so many Latin American nations does not exist here. In the potential event of devaluation of the US dollar, Panama also has its own coined currency, called the Balboa (1 to 1 value with the dollar), to which it can switch over.

There is definitely something for everyone in Panama! Panama City is a modern metropolitan city with restaurants, shows, clubs and all that a city dweller desires. The countryside is peaceful with beautiful scenery. There is horseback riding available, coffee and cocoa farms to visit and adventure trails that beckon. Many beaches on both the Atlantic and Pacific are great to surf, sail, fish, or sunbathe (often with no other people in sight!). There are also resort towns offering high class spa treatments and golf. Not to mention tours galore, from the Famous Panama Canal to exploring one of the seven indigenous tribes that still live as they have for years. I can’t imagine running out of things to do and explore.

There has been, and still are, a large number of foreigners relocating to Panama. English is widely spoken in the larger cities and communities where groups of expats have settled. I have found quite a few clubs and organizations that have formed through a desire to fill the needs of missed comforts from home, like book clubs and theatre groups, or just to connect with other expats. Need someone from back home to talk to? Many of these groups can be located through Google or found in a Yahoo group search.

Panama has high quality health care and modern hospitals. Panamanian doctors generally complete their studies and residencies in other countries, and then bring their state of the art knowledge and technology back to Panama with them. Many doctors are also affiliated with top hospitals and medical schools in the United States, like John Hopkins. Punta Pacifica Hospital is one of the many hospitals in Panama known for having standards as high as those in North America.

Panama also has lower costs for drugs and health care, which is attributed to less-costly office facilities and pharmaceutical companies’ lower pricing. The average Panamanian earns $500 per month and healthcare pricing is generally set accordingly.

6) A perfect climate for everyone (except for those who like snow!)

Panama has a mountain range running down the center of the country which is bordered by beautiful beaches along the Atlantic and Pacific sides. The mountains are mostly gently rolling and made up of volcanic soil which provides an excellent base for lush vegetation and a green landscape. If you prefer a tropical climate, like me, you won’t be disappointed on either the Atlantic or Pacific coasts. Temperatures on the coasts range from about 75-90 with higher humidity than the inland areas. If you prefer a more temperate climate just move up the mountainside and you’ll find it. The higher altitudes range from the upper 50’s at night to the mid 70’s during the day. No matter where you are in Panama you’ll have easy access to the beaches or the mountains when you want a change of pace. It’s almost impossible to be more than an hour’s drive from a Panama beach; 30 minutes is more common. Did I mention these temperatures are year-round? There is a rainy and a drier season but you’ll never need a snow shovel again!

7) A lower cost of living

How much you will save by living in Panama will be determined both by the amount you currently spend in your home nation and the lifestyle you choose in Panama. There’s such a great variety among expatriate lifestyles that it’s impossible to tell you how much you’ll save, but if you have any desire to spend less, you will find it far easier in Panama than in North America or Europe. Real estate, restaurant meals, entertainment and daily living expenses are generally lower across the board. A simple life in the low-cost rural areas is substantially cheaper and it is possible to live quite comfortably. Those choosing higher-cost urban areas will save less, but still enjoy many of the same amenities as back home, live comfortably, cut overall expenses, and save money. A lower cost of living has always been a primary reason to relocate to Panama and it remains a big one today.

One of the biggest draws for retirees is the very attractive pensionado program in Panama. If you currently receive a monthly pension in your home country of at least $1000 per month for an individual, $1250 for a couple, you may qualify for this popular visa. The pensianado visa offers an array of excellent incentives to foreigners who retire here. A few of the extensive list of discounts you can get by showing your card include 30% off public transportation (including buses and ships), 25% off Copa Airlines flights, 30-50% off hotel stays, 15-20% off at most restaurants, 10% off prescription drugs, 20% off the cost of doctor’s visits, and even a 25% discount on your telephone and water bills. In addition, you can bring in all your household goods free of taxes and import a new car every two years for private use.

Foreigners who become pensionados can buy and own real estate and enjoy exactly the same rights and protections as Panamanians, which is not always the case in many nations. As for income taxes, you will be pleased to know that in Panama you pay no taxes on income earned outside of Panama.

9) The economy is thriving

As North Americans and Europeans know from their own experience, a healthy middle class is the foundation for a stable economy and a secure democracy; and Panama’s middle class is growing. The Panama Canal provides Panama with a large, steady, dependable income and will continue to for years to come. It is a source of thousands of well-paid jobs for Panamanians (with the $5.2 billion expansion of the Panama Canal, currently underway, adding even more). These are jobs that pay considerably more than picking coffee beans or cleaning houses.

But there is more than the Canal to Panama. International banking, maritime services, manufacturing, and shipping combine to provide more jobs and tax revenue than the Panama Canal. Panama is also home to the second-largest free trade zone in the world (Hong Kong is the largest) which has had a dramatic impact on the economy, employing twice as many people as the Canal. Panama’s economy is far more modern and service-oriented than you might expect. The roads are in good condition in most of the country and internet service is widely available. This means stability not only for Panamanians, but for those of us who retire there.

If you’ve done much international traveling, you have probably been looked at with awe or downright dislike in a few foreign countries. One of the things that I noticed on my first trip to Panama was the genuine friendliness and acceptance of foreigners by the Panamanian people. I find this to be true all over the country, regardless of economic status. This may be due to the introduction of hundreds of thousands of people from all over the world to Panama over the years, including tens of thousands of Americans assigned to support the Canal before its turn-over to Panama in 1999. Panamanians are perfectly comfortable with people from other nations. English is widely-understood and also spoken by many of those who deal regularly with expatriates, although many Panamanians are hesitant to speak it at first, for fear of embarrassment, as is so often the case in reverse! No matter how little Spanish you may know, try speaking to locals with it and you are guaranteed to bring smiles. The people of Panama are just plain friendly and a pleasure to know.

The factors above are just a few of the reasons why I chose Panama for my new home. One of the main reasons, which can’t be substantiated by facts, is that it simply “feels right” here. Panamanians are among the most pleasant, relaxed people I’ve ever met. Panama is still a relatively young nation and has its growing pains, but it’s made a great deal of progress already and is headed in the right direction. There are numerous opportunities for residency, investment, and exploration. We’ve found that we can live comfortably for much less money and far less stress. We save money living in Panama, but we also bring money, create jobs and open new possibilities for Panamanians. These reasons and more is why Panama is such a good place to retire.