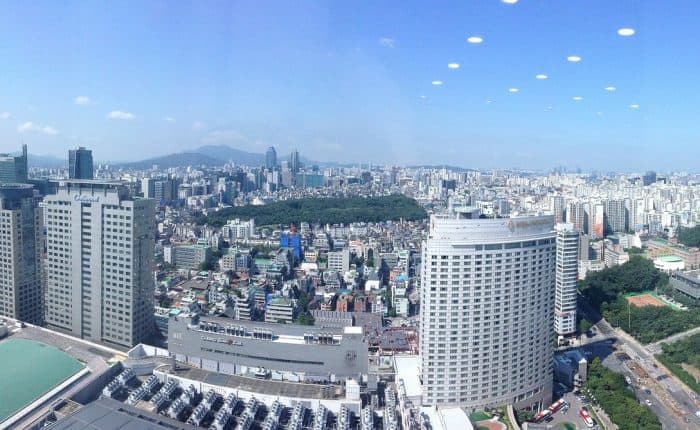 I moved into a quiet yogwan, a traditional Korean inn, near the great gate at Kwanghwamun, downtown. My window looked out over ancient palace rooftops and beyond, to a thoroughly modern outdoor display screen. In a glance, I could take in some 600 years of Korean history.

The yogwan was next to an outdoor market. Nothing in American retailing prepares you for this experience. Squeezed onto a single street about two blocks long were stores offering practically everything one might want or need, from apples and pears to plumbing equipment. By some exotic geometry, the shops seem bigger on the inside than the outside.

Koreans love seafood. The fresher, the better. So, seafood restaurants are everywhere, and watching the critters in their tanks is a free and fascinating pastime. You see handsome sharks. They’re expensive, too. Those things like red artichokes are sea squirts. And octopi – the most intelligent of invertebrates – soar, swirl, and even (after a fashion) dance. Watching their graceful movements, you regret that the octopi will wind up as rubbery entrees.

In case you want to investigate Korea as a home, the first lesson to learn is this: IT’S NOT JAPAN! There is a world of difference between the group-minded Japanese and the more individualistic Koreans. Also, “Japan” is a foul word in Korea, because Korea was a colony of imperial Japan from 1910 to 1945. Koreans hated Japanese during those decades of occupation.

You see things here that no other city on earth can claim. At the Kwanghwamun gate, you walk past giant statues of two fire-eating monsters, the “haitai.” They were placed here to guard the palace against burning. They appear to be half seal and half lion. They also have big toothy grins. One expects them to giggle.

About street-stand food: DON’T. In many cases, you have no idea how it’s been prepared. You may not even have the courage to touch it. I’ve never worked up the fortitude to taste the stewed silkworm pupae, or whatever those brown things are, bubbling away in big steel vats.

Whatever you do, never buy prepared “kimpap,” a ubiquitous rice-and-seaweed roll, at convenience stores. Kimpap can be Salmonella City. Trust me. Tainted kimpap laid me low for an entire weekend once.

But don’t let these warnings turn you off to Korean food. Cuisine is Korea’s glory, and most Korean cooking is perfectly safe for Westerners, unless you overindulge in spicy stuff. As a rule, if it’s bright red, go easy. Even Koreans overdo the hot foods now and then.

What’s tasty and not too fiery? “Bibimpap,” a rice-and-vegetable dish, is popular. So are “mandu,” Korea’s stuffed dumplings, whether steamed or fried. And if you really need a fried-chicken or hamburger fix, Western fast-food outlets are well represented in Seoul. Koreans make a mean pizza, too. Just don’t be surprised to see bottles of hot sauce at your booth in a pizza parlor. Koreans can’t resist hot spices even when going Italian.

Seoul on the whole is a great place to live. Violent crime is rare, if you ignore the occasional, less-than-serious alley brawl after a few rounds of drinks. Graffiti do not cover every surface in sight. Streets are clean. If you cannot find something in Seoul, then probably either you do not need it, or it does not exist. I cannot recall ever seeing a vandalized subway car or public phone. It is possible to live in comfort here on a modest income. And best of all, the pervasive air of fear and insecurity that characterizes American cities is absent from Seoul.

Why? As far as I can tell, it is simply a matter of culture. From their earliest years, Koreans are taught respect for elders, the importance of civil behavior, and the need to defer gratification when necessary. One may argue the pros and cons of “Asian values,” but one cannot argue with desirable results, of which Seoul is a showcase.

I hope you enjoyed reading this article: Living in Seoul, Korea. If you have any questions, please contact our office HERE.

Tips for Visiting Paris on a Budget