With tensions between North and South Korea on the rise, the U.S. military has begun installing a missile defense system in South Korea. The government is hoping to reduce the threat from North Korean missiles. The decision to install the system is quite controversial.

Business and travel between South Korea and China has been rattled.

Known as Thaad (Terminal High-Altitude Area Defense), the system is designed to intercept and destroy short and medium-range ballistic missiles during their final phase of flight.

The system was agreed upon last year under the Obama administration and is not scheduled to be operational until the end of 2017.

Many local residents protested the deployment as the equipment was arriving at the site in southern South Korea. Television footage shows military trailers with dozens of police lined along the road, holding back hundreds of protesters.

Recently, the U.S. has deployed warships and submarines to the Korean peninsula, fearing North Korea could be planning further missile or nuclear tests.

The Trump administration has been urging China to rein in its ally, North Korea, and is planning to hold a classified briefing for senators on the situation at the White House.

China says the Thaad system will destabilize security in the region. The Chinese government is very unhappy with the decision and has taken measures to make that well known, mostly aimed at the tourism industry of South Korea. 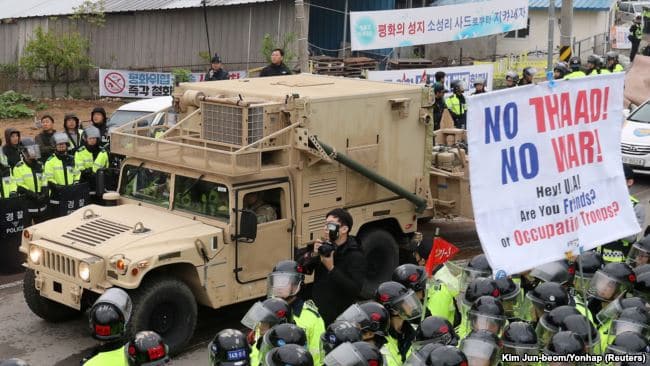 Due to China’s disapproval of the system, South Korea’s tourism numbers have been suffering.

China has expressed concern over the safety of the situation and has decided to retaliate by refusing to contribute to South Korean tourism. As South Korea’s largest trade partner, China’s decision to do so has had an enormous impact.

Chinese tour groups have been canceling trips because of the anger over the situation. South Korea has said Chinese authorities are even believed to have told travel agencies to stop selling trips to South Korea last month.

According to South Korea’s Ministry of Culture, Sports, and Tourism, Chinese authorities summoned representatives of travel agencies in Beijing and instructed them to stop selling South Korean tours since March. It was an unofficial instruction, but was still upheld.

One Chinese travel company, Tuniu, has stopped sales of South Korean trips completely. The online travel firm said in a statement that it objected to the Thaad deployment.

The number of visitors to South Korea plunged by 40% since last month.

Businesses in South Korea that depend on foreign tourists are beginning to feel the effects. Last year, eight million of the 17 million foreign visitors were Chinese citizens.

Investors are also worried about the tension and potential fallout of tourism. Shares in companies with big duty-free businesses plunged on Friday. Hotel Shilla dropped 13% and Shinsegae dropped 5%.

Lotte, one of South Korea’s biggest conglomerates, is also feeling the effects. After having to give up one of the company’s golf courses to house the Thaad system, Lotte has seen 87 of its 99 stores in China close, and work on a theme park has been suspended.

Chairman Shin Dong-bin says he was unable to refuse the government’s request for the land, as it was a matter of national security.

This is not an ideal situation for South Korea, because outbound travel by China’s middle class is on the rise. $261 billion was spent by the Chinese on traveling abroad last year, according to the World Tourism Organization. That’s a 12% increase from the previous year.

South Korea is pushing ahead with the decision, as tensions between Beijing and Seoul show little signs of easing.

Last month South Korea launched a complaint against China to the World Trade Organization, but China denies that it has anything to do with the Thaad deployment.