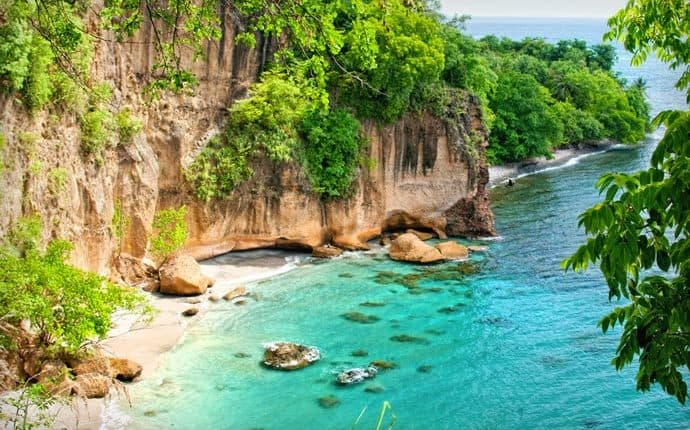 Dominica: The Nature Island of the Caribbean

When you visit Dominica, you’ll see that it is popularly referred to as the Nature Island of the Caribbean. The island is home to a mountain range, with several of its peaks reaching up to 5,000 feet in height, rainforests, hundreds of rivers, lakes, waterfalls and thermal hot springs. It is home to the second-largest boiling lake in the world, and the hiking trail associated with that lake is not for the faint of heart.

Most of the activities offered when you visit Dominica involve the outdoors in some form. For example, popular activities include dolphin and whale watching, bird watching and botany tours with foresters, scuba diving, and hiking. Anyone who wants to submerge him/herself in nature can easily do so when they visit Dominica.

Additionally, there are Word Heritage Sites and famous national parks to visit. It should not surprise you that much of the Pirates of the Caribbean movies were filmed in Dominica. It’s just that beautiful.

What Sets it Apart

Sure, you can find good nature packages in many places, even if they are much more populated. But there is more that is special when you visit Dominica. This country’s native language is English, while the language of many other countries in that area of the map is typically Spanish. Dominica is also a lot safer than many of the more populated areas that offer the same type of natural settings. Consider the Amazon Jungle, for example. It takes up a vast amount of land, but there are only a few entry-points you’d want to use for safety reasons. This isn’t something you’d have to worry as much about when you visit Dominica.

Prices can be a bit higher than they would in countries attached to mainland America, but that comes with the island territory. It costs more to ship materials out to islands. What can ya do? But, you can still maintain a comfortable lifestyle for less than you could in many parts of the United States. Stick to locally produced goods as often as possible as part of your budgeting plan and you’ll be alright. This is especially true considering much of the island’s activities simply include enjoying the outdoors – which is free!

Rent prices are pretty low overall, with a three-bedroom apartment in the capital city of Roseau costing around $800, and a one-bedroom costing around $330. An even better bet is to purchase real estate in Dominica. Roseau is one of the most popular cities for foreign investment. The average home can be bought for between $250,000 and $600,000, depending on whether you want to live a comfortable or lavish lifestyle. If you’re retiring, lavish is probably the more exciting way to go! Of course, it makes sense to budget at the lower end of that spectrum, too. Either way, you’re making a great investment – especially since Dominica has one of the best citizenship by investment programs offered in the Caribbean. You can invest in real estate and also qualify for citizenship in one fell swoop.

Most of the food available on this island consists of most of the Caribbean staples much of the area is known for. That would include salted fish, chicken, rice and beans, and any combination of those ingredients. A lot of the indigenous population of Dominica farms bananas and plantains, and you can get a surplus of these items for affordable prices as well.

The culture is heavily influenced by native music, dancing, and festivals. The country also celebrates a large Carnival festival during Mardis Gras season as well. With all of the lively cultural activities taking place, in addition to the excess amount of outdoor activities available to guests and residents alike, you’re sure to fall in love with life on this island!

I hope you will be able to visit Dominica in the future. It really is a beautiful place. When you are ready to make the trip, please reach out to us HERE and we will make your first visit to Dominica exceptionally special.

When you’re ready, we’re hear to put things in place for you and get you started with a CBI in Dominica. Contact us HERE.

I wrote a great article called: How To Obtain Citizenship In Dominica. There’s a ton of great information and all up-to-date. Make sure you take a read.