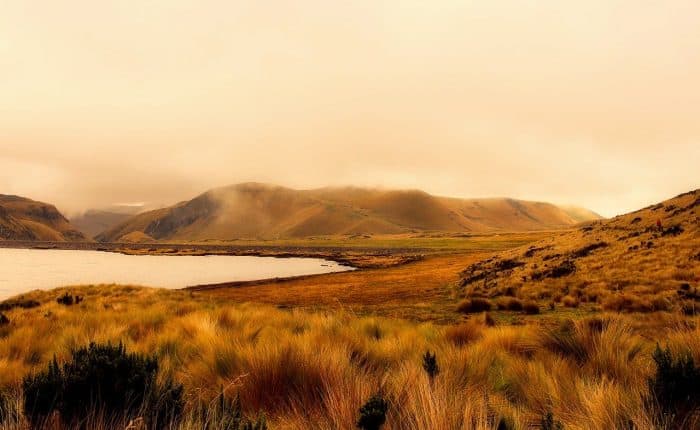 ”Oil is well that ends well”

The oil sector in Ecuador accounts for about 50 percent of the country’s export earnings and about one-third of all tax revenues.

If that doesn’t get your attention as to the fact that “oil is king” in Ecuador, little else will. Ecuador produces approximately 500,000 barrels of crude oil per day (bbl/d), most of which is exported.

While this makes Ecuador a relatively “modest oil producer”, being the smallest producing member of OPEC, it still ranks #31 globally in overall oil production and ranks #20 in proven oil reserves, with 6.5 billion (bbl) in reserves.

Handpicked Related Content: 6 Reasons You Should Move To Ecuador

Since the first-ever “gusher” began pumping at British Petroleum’s (BP) Ancon 1 well site, in 1921, the nation’s fascination with oil commenced.

In fact, the city of Ancon went from barely noticed “fishing hamlet” to a first-world city, by the standards of its time, becoming the first coastal location to have electricity and other “modern” infrastructure, in order to accommodate BP personnel and operations.

Oil fueled the passions of men in Ecuador, even leading to the common sight – vestiges still visible today – of individual owners, having pumping equipment on their small plots of land, in the hopes of “striking it rich”. This wasn’t just a corporate business, oil was an “every man’s business”, in Ecuador.

Relocating To Ecuador As An Expat

How does this impact the modern era expat, looking to relocate to Ecuador? Well, the truth is it can impact in a variety of ways.

Handpicked Related Content: A Case For Immigrating To Ecuador

Work In The Petroleum Industry Sector Of Ecuador

If one has a university degree in chemical engineering, geophysics, environmental sciences, or in a variety of diverse high-tech fields, such knowledge can be spun into a career in the ever-growing petroleum industry sector of Ecuador. In fact, with the added advantage that many of the potential employers are global and likely more demanding of bilingual language skills.

Invest In The Oil Industry

Additionally, if one desires to really immerse themselves in the “big oil” game, one can become an investor.  Don’t worry, you don’t need 100s of millions of dollars to get started. Remember, Ecuador has a rich history of having even the small players, fully engaged in the industry, right down to, as mentioned earlier, individuals that to this day, mine for oil on relatively small plots of land.

One such small plot, relatively close to my home, literally sits on a small oceanfront residential parcel of land, amidst a largely residential community, teeming with single-family homes and the occasional high-rise condominium building.

It is quite the site and, by no means, the only such exception. Seen the oil rig set up dozens of times and, yet, each time I see it anew, can’t help but do a classic “double-take” that would make most a cartoon character proud.

The opportunity, as part of an investment group, or as an individual, to come to Ecuador and become a “micro-tycoon” in the oil industry is a very real option, for those with the capital to risk. Remember, like all mining, there are no “sure bets” in the oil industry.

Lastly, you can parlay your oil interest into something a little less risky and a whole lot more tangible – real estate.

The hard asset of real estate always offers some degree of relative value, especially in today’s world, with currencies sitting so precariously on the infamous “fiscal cliff”. However, want to change the more sedate, hard asset real investment model, for something with more kick? How about speculating on land for development by the oil industry?

Now, let us not take a naive look at this latter option.

Any land speculation, by its very nature, implies a certain amount of very real risk that said “speculation” doesn’t pan out. Additionally, the “big boys” in the oil industry already sit on large land banks for exploration. However, don’t let that latter statement fool you, either.

The oil industry giants are always looking for the right opportunities to add to their land bank. Sort of like sharks on a constant feeding frenzy. While a small residential lot parcel, as mentioned earlier, would certainly not be on their radar screen, a well-situated larger plot of virgin land, just might.

That’s what speculation is all about… the uncertainty. However, do your due diligence properly, targeting land on the periphery of already existing exploration territory, and you just might find a way to make big money in the oil industry, without directly coming into contact with oil, at all.

However, before any erstwhile expat jumps headfirst into Ecuador’s dynamic oil sector, it is important to understand its history and likely future direction, within its uniquely “Ecuadorian setting”.

Handpicked Related Content: Why You Should Invest In Ecuador

Understanding The History Of Oil In Ecuador

From the success of Ancon 1, forward, it is hard not to define Ecuador’s progress with the rise and fall of oil.

In fact, harkening back to the “heydays” of the town of Ancon, one can see that rise and fall, in sharp micro-contrast. Ancon became a boomtown during its successful oil drilling period, generating the nearby satellite fishing village known as Anconcito (literally, “little Ancon”) to meet the fish/seafood needs of the then bustling town of Ancon.

Today, a stroll through Ancon will likely bring you face-to-face with many of the town’s modern-day fishermen, who now go to the thriving fishing town of Anconcito to ask for work. While about a half-dozen actively working pieces of drilling equipment still dot the Ancon landscape, mostly on private, individually owned lots, the oil boom has long run dry.

The Ancon of today likely more resembles the sleepy fishing hamlet of the pre-1921 days, than it does the once vibrant town ushered in by the oil boom.

The Current Oil Sector In Ecuador

The current oil sector organization in Ecuador is dominated by PetroEcuador, the national oil company, which controls most of Ecuador’s crude oil production.

The second-largest oil company is PetroAmazonas, also state-owned, slated to be fully merged and absorbed by PetroEcuador.

Lastly, Rio Napo acts as a joint-venture between Ecuadorian and Venezuelan oil interests, filling out the top three oil companies in Ecuador, today.

Currently, Ecuador’s most productive oil blocks reside in the northeastern part of the country, with Shushufindi and Auca as two of the most prolific fields. However, with the inauguration of the Panacocha field in the Ecuadorian Amazon – the first new production expansion since the current government took office in 2007 – the promise of a new major oil block has been realized.

Ecuador produces oil exports valued at approximately $9.7 billion per year, using baseline 2010 figures, which is an incredible ten-fold jump from the $900 million productions in 1998, during Ecuador’s infamous economic crisis.

Presently, the United States represents Ecuador’s largest crude oil customer, with other leading destinations for Ecuadorian crude being Panama, Peru, and Chile. However, Ecuador has begun to look towards the Asian markets, namely China, as an alternative export market and source of investment.

While Ecuador lays claims to the third-largest oil reserves in South America, after Venezuela and Brazil, mostly located in the Oriente Basin, underlying the Amazon, and despite its respectable oil production of 500,000 bbl/day, Ecuador is still a net importer of refined oil products, due to the lack of sufficient domestic refining capacity to meet local demand.

According to data from the Oil & Gas Journal, Ecuador has three commercial oil refineries, with a combined capacity of 176,000 bbl/d. The three principle refineries are:

Despite this output, Ecuador still lacks the capacity to meet ever-growing domestic demands.

Plans include an upgrade to the Esmeraldas refinery, in order to better process Ecuador’s heavy domestic crude – a project contracted to South Korea’s SK Engineering. Also, discussions between Ecuador and Venezuela have progressed towards the construction of a new refinery in Ecuador. The two countries established a joint company to build a facility on the Pacific Coast, in Manabi province, with a crude distillation capacity of 300,000 bbl/d.

According to recent industry reports, China’s Sinopec and/or CNPC might fund a portion of the project.  Observers watch carefully to note if the recent Venezuelan change in government, will alter or slow such aggressive joint-venture plans.

Also, presenting a slight blemish, on Ecuador’s otherwise promising oil industry sector, is its historically uneven relationship with foreign firms. For example, Petroecuador took over the production assets of Occidental Petroleum as a result of expired contracts.  Also, who could possibly miss, even if you have limited interest in the oil sector, Chevron’s lengthy legal battle with Ecuadorian plaintiffs? In February 2011, an Ecuadoran court ordered Chevron to pay over $18 billion in damages to indigenous communities that it had found to be harmed by Texaco’s operations (Chevron owned), in Ecuador, between 1964 and 1990. Chevron is appealing, yet again, and an international tribunal is due to rule on the matter in 2014.

From a public relations perspective, much has been made of the latter, attempting to frame this “Chevron trend” as a move towards a more aggressively “nationalistic” oil policy. A closer look, however, reveals a likely different reality. This is more a newly aggressive anti-pollution, pro-environmental stand.

While such renewed environmentally friendly policies have not guaranteed success, such as an oil spill flowing downstream and impacting the Peruvian eco-system, the effort has been generated to make the traditionally “dirty” industry of oil production, into as clean and environmentally friendly an industry as possible, within Ecuador. Chevron got caught in the middle of this new trend and the ensuing legal fracas continues.

Lastly, environmental and socio-cultural issues again jump to the forefront, of another challenge facing the oil sector in Ecuador.

During the Correa Administration, attempting to expand oil production and revenues, has spent a good portion of the last year trying to auction off anywhere between 3 million and 8 million acres of land in the Amazon region for oil exploration.

Potential bidders have remained muted and hesitant due to a strong backlash from the local indigenous community, which has mobilized and issued a formal “declaration of opposition” to the Ecuadorian government’s proposed auction. Fierce protests have sporadically arisen and environmental movement forces have drawn upon this opposition to make a case for the hazards that could befall the underlying fragile ecosystem.

These oil sector challenges are pushing the government to find permanent solutions to reduce Ecuador’s disproportionate reliance on oil revenue. While such developments are likely to occur over much time, presently, oil is still king in Ecuador. Anyone with a passion for the oil industry, in terms of investment, business formation, or career advancement, would do well to explore the opportunities that Ecuador readily offers.

I hope you enjoyed reading this article: The Oil Sector In Ecuador.