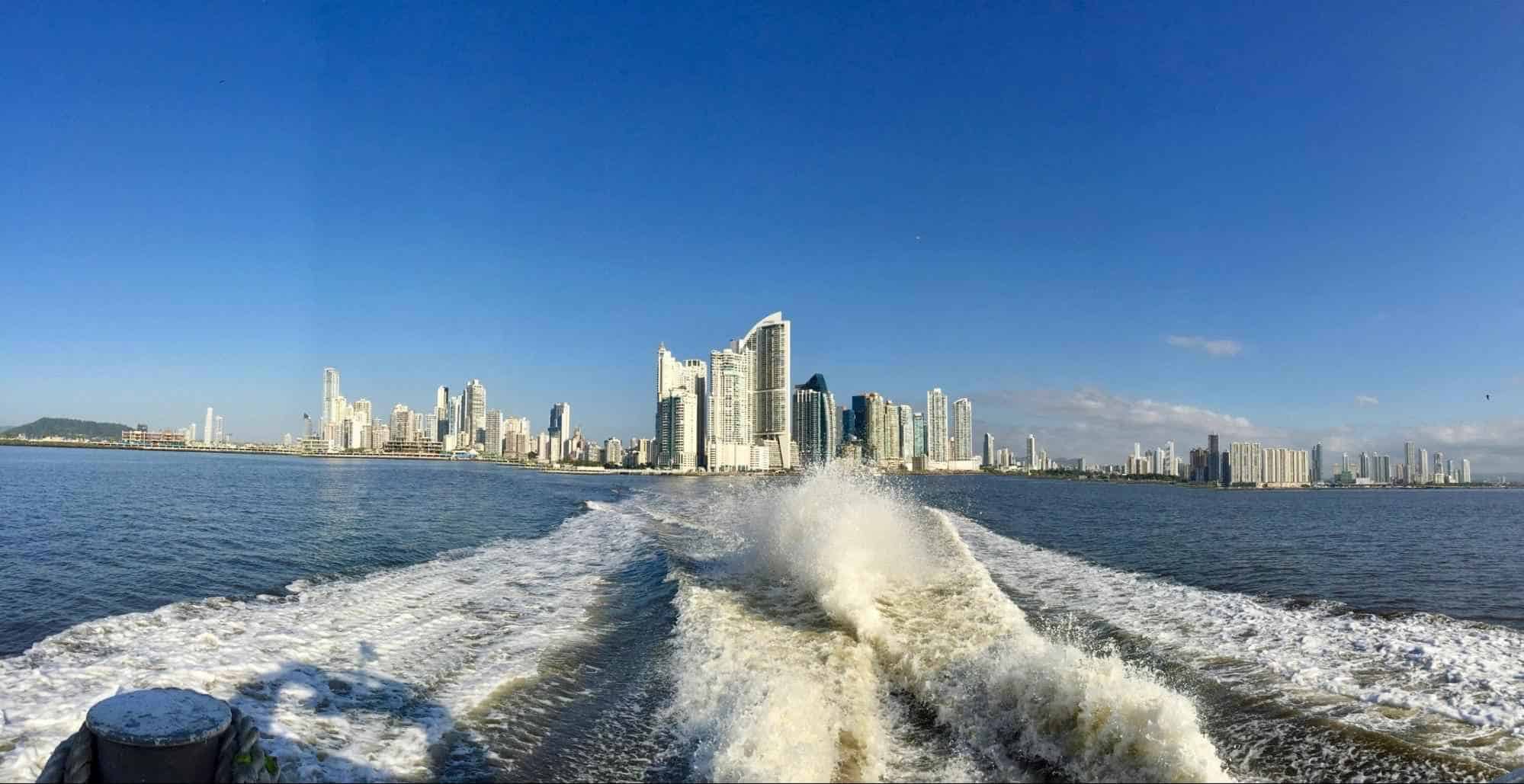 Beautiful, unspoiled white-sand beaches with not a single soul in sight. 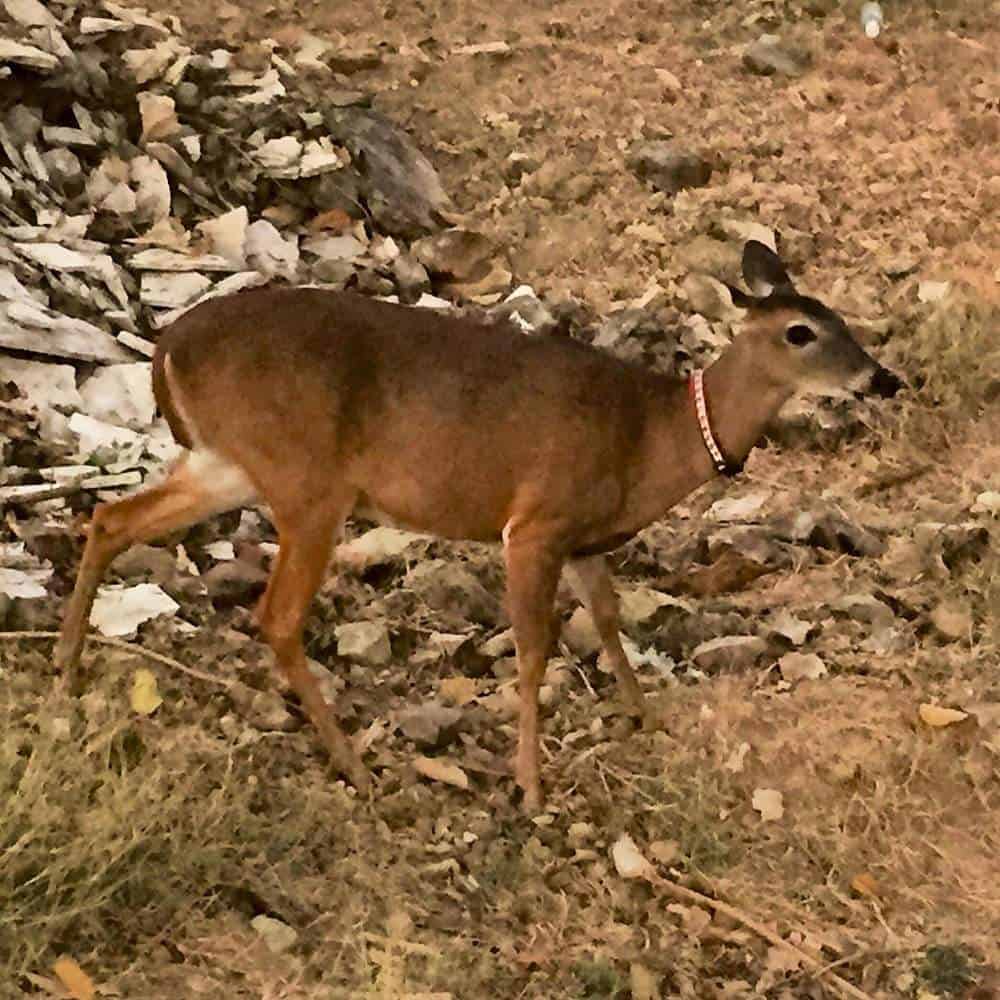 Deer with a collar.

Located only a short 1.5-hour ferry ride south from Panama City, this mysterious island is one of the largest in the 200-island Pearl Archipelago. Once a luxurious, tropical playground for the rich and famous, now this island remains quiet and desolate. Today, many consider this island to be cursed due to the consistent string of bad luck that has continued to occur over time.

It took a few years of conversations with my parents about the uniqueness of Panama to finally convince them to visit. They were ready for some beach R&R and I was ready to introduce them to the country I had just become a resident of. The only caveat was that I had to do the planning. Easy enough, right? After researching popular, off-the-grid beach locations, an attractive itinerary was put together, to which my parents approved. (Although, despite the extensive research done, we couldn’t at all predict how the trip was going to end!!!)

After a successful day-tour to the teak farm in the Darien, my parents were ready for the beach. We caught a comfortable, spacious water ferry from Panama City (Ferry Las Perlas, costing about $58/pp 1-way) and enjoyed a smooth ride to the island. 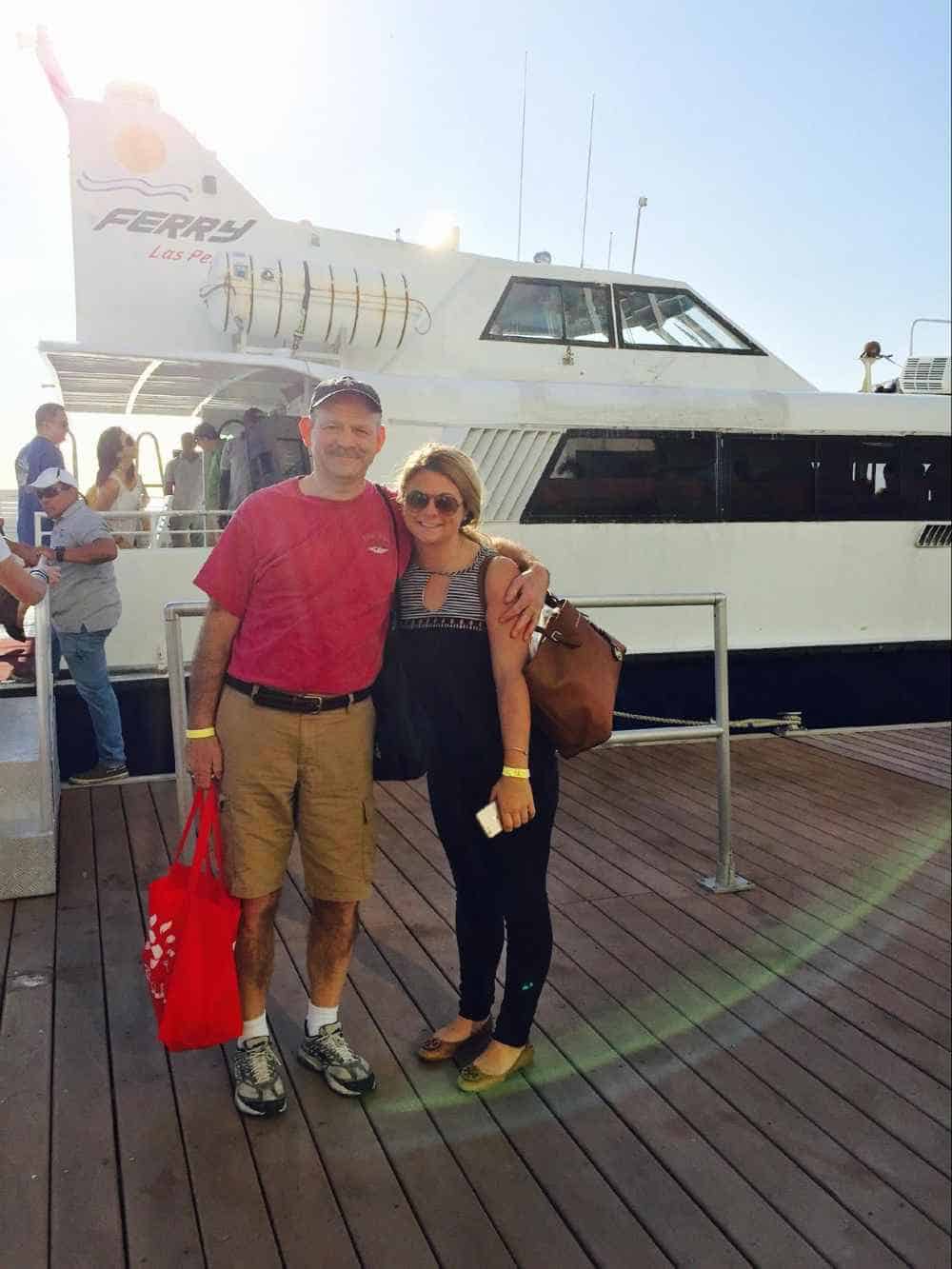 Dad and me at the ferry terminal.

As we rode further from the city, the water shifted from a murky green to striking crystal-clear shades of turquoise and azure. We passed a handful of smaller islands, most of which were undeveloped or containing minimal infrastructure. We were only a mere 50 miles from the bustling, metropolis of Panama City, yet it felt a world apart. 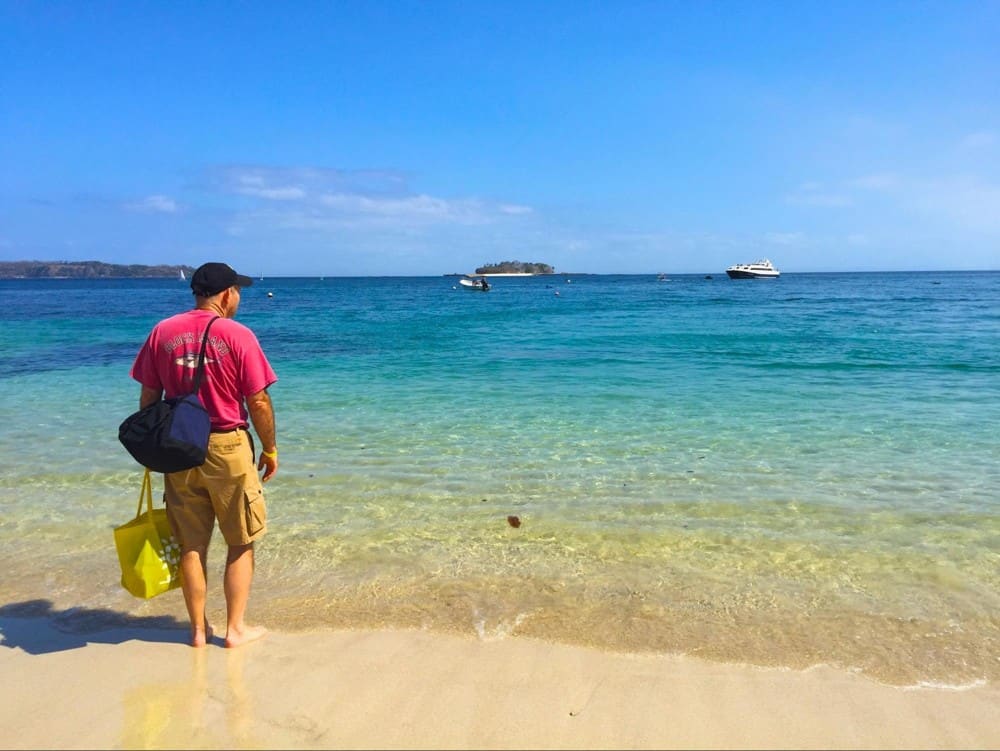 Upon first approach, Contadora looked like someplace out of National Geographic magazine. The water was shallow and clear enough to see straight to the sandy bottom. The small rolling hills in the distance made for a unique topography that the other islands didn’t have. And the few people on the shore greeted us with large grins and welcoming waves.

Due to the shallow depths of the water as we approached the shore, we anchored about 150 feet from land. A panga approached, and the passengers from the ferry transferred to the little boat, squishing next to each other like sardines to fit. 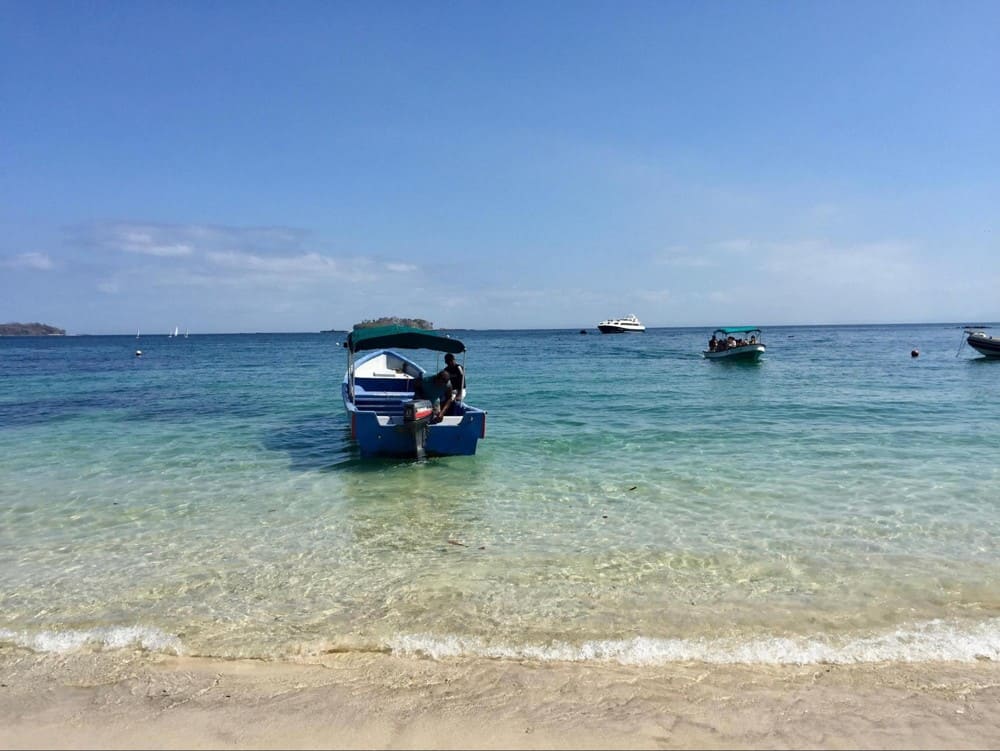 The back of the panga.

A few minutes later, we were dropped off on the beach in the middle of the “town.” The island’s tiny airstrip was directly ahead of us with two narrow paved roads on either side going up slight incline hills. Our hotel was 100 yards to the left, and to the right was a dilapidated-looking motel and a road leading to a few restaurants and along the perimeter of the island. A representative from the B&B greeted us with a golf cart, offering to take us and our luggage up to the hotel. We accepted the invitation.

Our B&B was exactly what we were expecting. The rooms were rustic and basic – but with AC, hot water, and a small rooftop pool with beach and sunset views, we were satisfied. There was even a safe. However, it was bolted to a small, portable coffee table—easy enough to grab and run out the door with. But the website was accurate –a safe was offered in the room.

The island was small, less than 1.5km2 with a tiny population of about 250. Exploration around the island was easy – roads were nicely paved, making it quick to drive from point A to point B by golf cart, the preferred method of transportation. 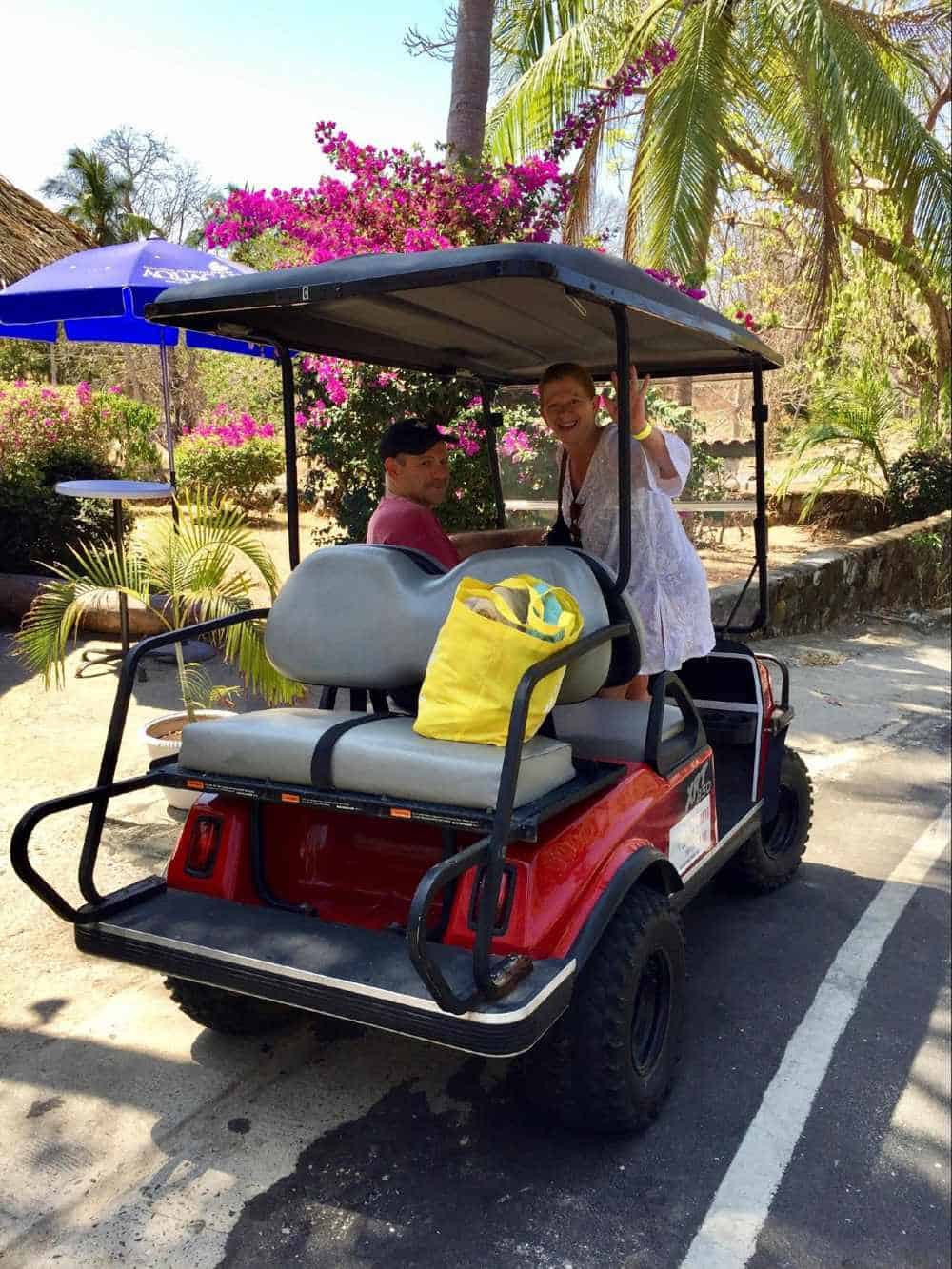 Golf cart ride to find a beach for a picnic.

Driving around the perimeter of the island by golf cart took a quick 25 minutes and was extremely scenic. Stunning beach homes with beautifully manicured landscaping on one side of us, and decrepit, crumbling gray buildings engulfed by tropical jungle vines on the other. As we continued to drive around, we came across buildings that were half-constructed and completely barren. Our minds were completely boggled. Rhetorically, we kept asking each other, “What happened to this island?” 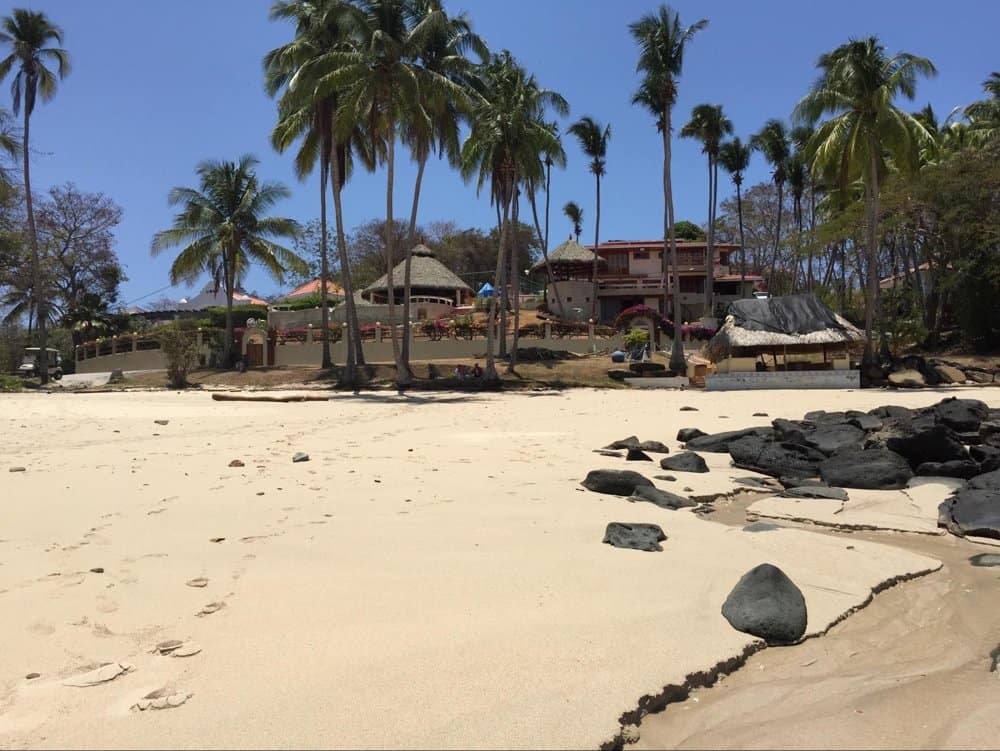 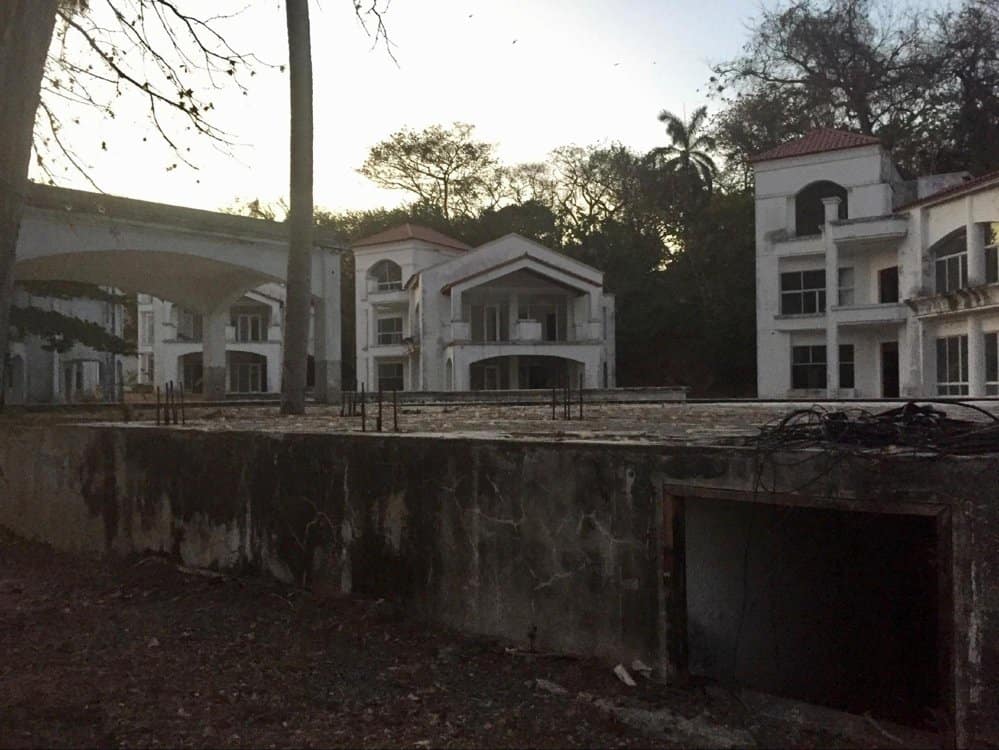 Looking somewhat modern, these villas were part of the old complex from Hotel Contadora.

Upon approaching a vast, abandoned beachfront hotel, my parents and I decided to get out of the cart and walk through it. There was no fence, no “no trespassing” signs, and no sign of activity. In front of us were a few large, multi-floor structures with large open holes where doors once were. Dead leaves covered the floors of the empty compound, which otherwise was bare-bonded and looted. We walked around the corner into the once-upon-a-time lobby and chills shot up my spine. Do you know that sensation when you feel like you’re being watched, but when you turn around there is no one there? That is exactly how I felt in this moment.

In front of us were huge stone Tiki structures. And although there wasn’t a distinct face in these structures, it felt like there were two huge eyes that were looking down on us. We quickly left the building and walked towards the beach in front of the hotel. The eeriness didn’t stop there. In front of us, washed up on shore, was a large, abandoned ferry that the Colombian owners once used to shuttle their guests around. Wow. This just kept getting better. 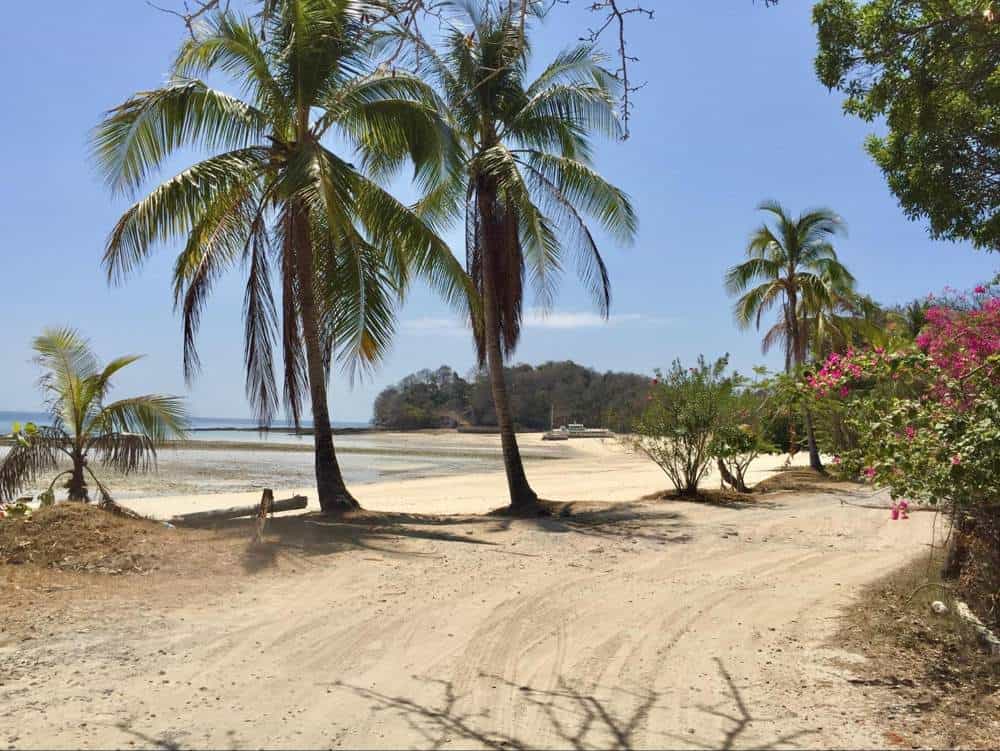 Abandoned ferry in the far distance.

Before we could stumble into any other unexpected surprises, we hopped back in the unmanned golf cart and rode back to our hotel, which conveniently was only a few hundred yards up the road.

At this point, curiosity about what happened to this island was killing us. So, we asked around and picked up some partial answers, some of which are still incomplete today.

The history of Contadora is absolutely fascinating. Originally inhabited by the indigenous people, by the early 1500s the Spanish arrived wiping out the local population. By the 16th century, African slaves were brought over to harvest pearls. Remaining fairly inactive thereafter, with the exception of occasional pirate visits, by the 1960s Contadora starting gaining traction again. Gaining even more popularity after the Shah of Iran was exiled to the island in the late 70s, Contadora truly became a high-end getaway for the rich and famous. 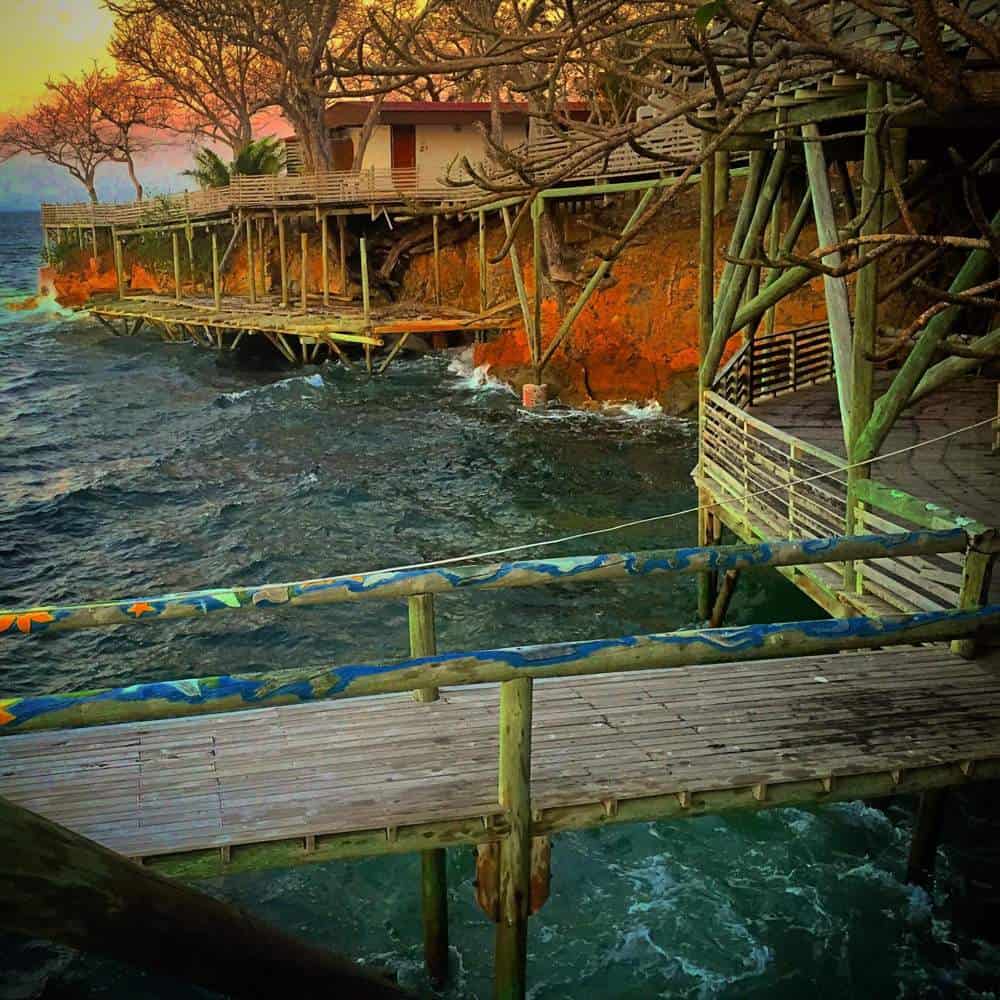 Wooden pathway at the decrepit motel (that has since closed).

The abandoned complex we had just stumbled upon was once a booming resort, hosting over 300 rooms in its heyday. Constructed in the late 60s, Hotel Contadora served as a luxury hotel for the rich and famous.

In the final days, the hotel became a drug cover. In 2009, when the owner of the hotel (an alleged associate of a Colombian drug lord) died in a plane crash, the hotel went down with him – leaving the mess it is today.

When looking further into the history of Hotel Contadora and the island in general, I came across a New York Times review from 2002, highlighting the downfall of the once-booming resort:

“Hotel Contadora’s glory days are long over, and that is putting it kindly. The main restaurant, where waiters used to stand four deep to serve an elegant clientele, is now open for institutional-type buffet service. There were other deficiencies –– periodic lack of hot water, sudden flooding, missing toilet seats and most remarkably, over the New Year’s holiday, no telephones … The point is that the Hotel Contadora is unapologetically bad, although it must be said parenthetically, it is also cheap: at $150 a night per couple, everything included, which, besides meals and carefully controlled access to beach towels, means ”unlimited national drink” (as it turned out, this was alcohol in gallon jugs and wine in wax cartons, served up in white plastic glasses). The champagne ran out years ago.”

To date, the hotel still (half) stands, and there have been no efforts to clean up the complex. In addition, very little has been done to promote the island from the tourism board’s perspective. What this means for you, if you’re an adventurous soul, is that you need to book a plane ticket to Panama and explore this island while you still have the opportunity.

A day before leaving Contadora, my parents and I stopped by the ferry booth to pick up our tickets for the trip back. We were planning to leave early the next morning to ensure dad had enough time to catch his international flight back home. Well, let’s just say we hit an unexpected bump in the road. Read the rest of the story here! (It included being stuck in the far east area of the Darien Province and missing international flights!) 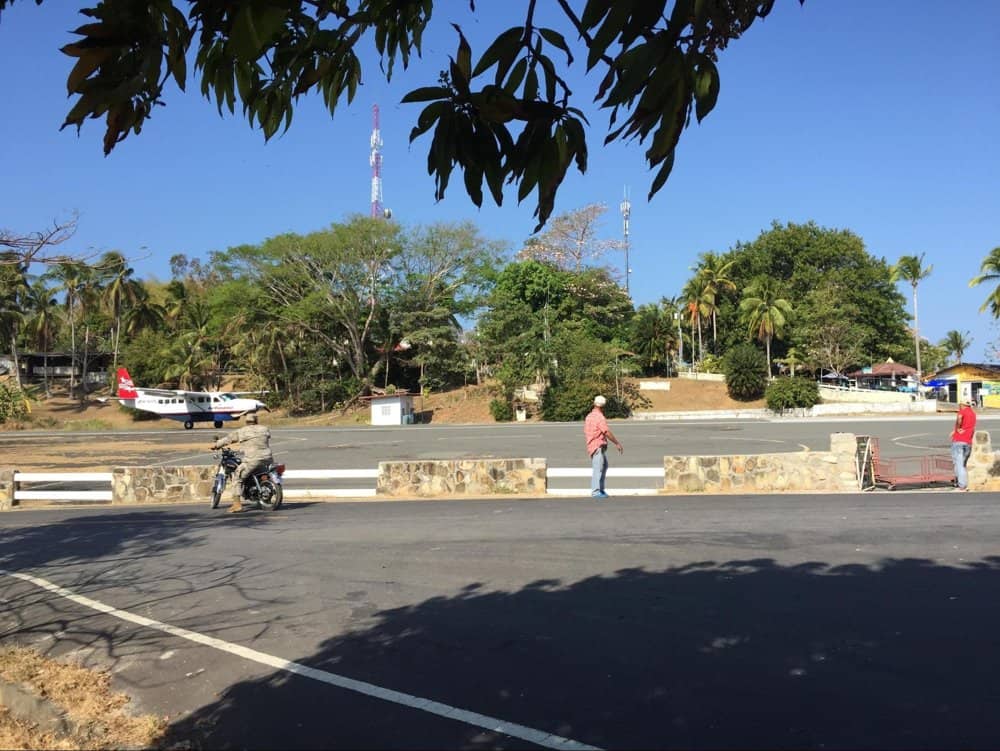 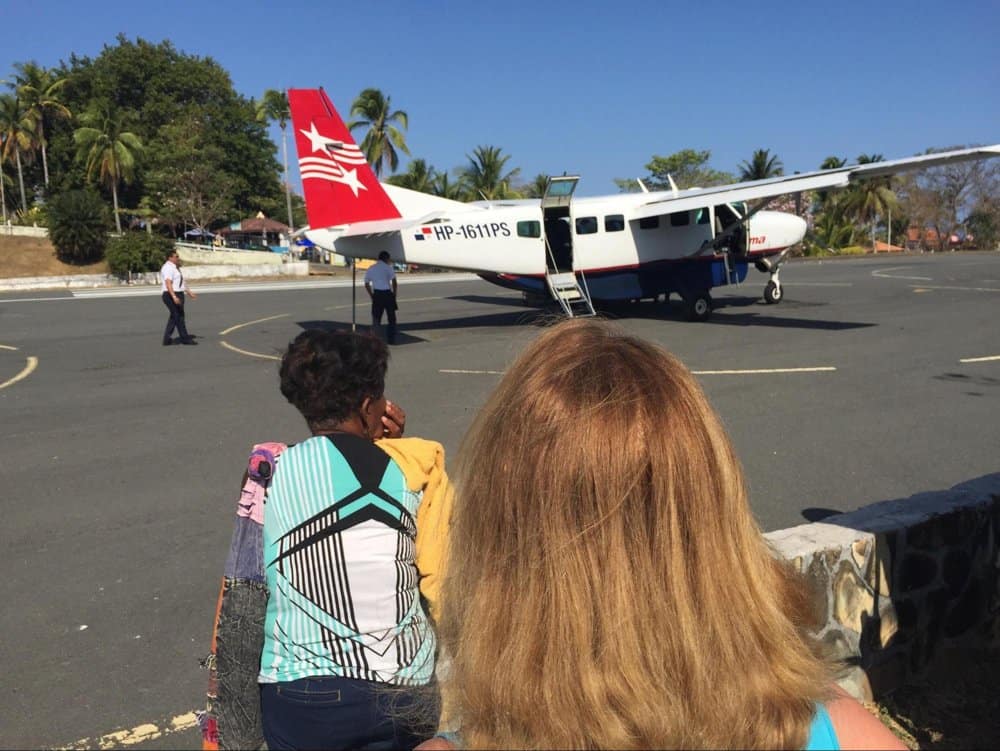 Heading back by plane…

I hope you enjoyed reading: The Forgotten Island – Contadora. If you have any questions, please make sure you reach out to our office HERE.  I’ve added some articles on Panama below, enjoy!

5 Myths About Living in Central America

Boating to Bacalar Chico—Chronicles of Life in a New Land

Teak Hardwood and Other Types of Timber Investments