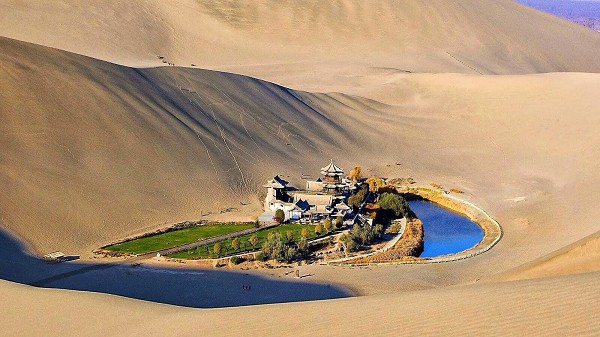 Last week, we talked about China’s far south – the unknown wonders of the Yunnan Province. This week, we look at another plethora of unknown wonders in the remote regions of Inner Mongolia and the Chinese Gobi.

There are few places on earth that evoke more mystery and adventure than the Gobi Desert. The Gobi lies between the Himalayan Plateau and the grasslands of Mongolia. It thus straddles the China-Mongolia border.

The country of Mongolia was once called Outer Mongolia – while China’s Gobi is still known as Inner Mongolia. On this trip, we’re exploring the Gobi of Inner Mongolia. “Gobi” is a Mongol word meaning “waterless place” – yet, there are hidden places within it that are far from waterless, as you will see.

We’ll start in Datong at the edge of the Eastern Gobi. Here we will find the World Heritage Site of the Yungang Grottoes 1,500 years old, 252 caves with 51,000 statues – it remains a masterpiece of ancient Buddhist art 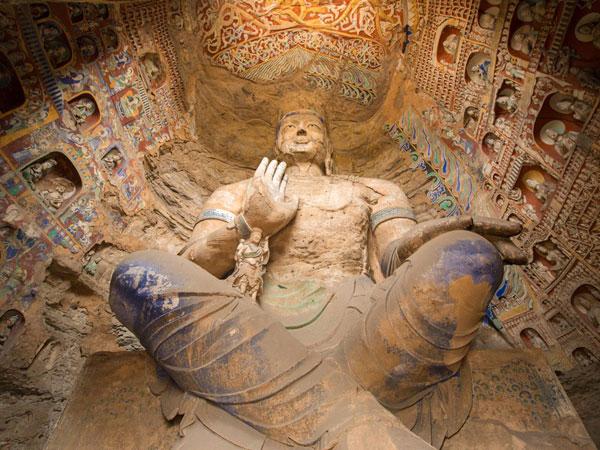 Not far away, you’ll find the Hengshan Hanging Monastery that has been suspended 250 feet in the air on the side of a cliff for over 1,500 years.

For over 1,500 years to today, this has been a working monastery, unique in all of China as one of all three religious traditions of Buddhism, Taoism, and Confucianism. Over 100 monks live here, whom you can visit and learn from. This jaw-gaping place is lit up at night: 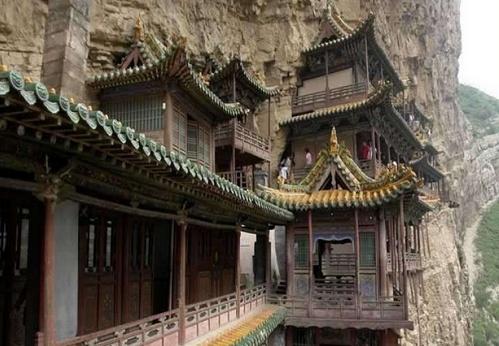 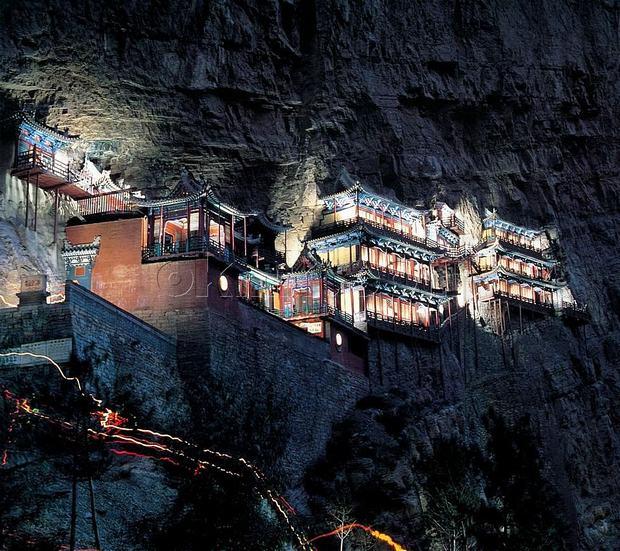 This is the Etsin Gol (Mongolian, Ruo Shui in Chinese). It ends in one of the largest deltas and alluvial fans in the world with a lake in the middle (the blue spot between the “I” in Inner and “o” in Gobi), Juyan Lake.

This is a vast lake right in the remotest part of the Gobi, straddling the China-Mongolia border. An enterprising Mongol has a boat for a lake cruise…

The lake is teeming with fish and swarming with birds.

I lucked out getting this great photo of one of them:

South of the lake lies one of the world’s strangest forests – one of the world’s last remaining places where the Euphrates Desert Poplar grows. In October, the leaves turn a brilliant yellow. It was here that the famous ladies’ sword fight in the Jet Li movie Hero was shot.

It’s an extraordinary experience to explore this forest that rises out of the Gobi sands.

Out in the sands nearby is the Lost City of Khara Khoto. Founded by the Tangut Mongols 1,000 years ago, Kublai Khan sent Marco Polo there as his emissary in the late 1200s. The Ming Chinese destroyed the place 100 years later. Less than 100 years ago, the Avenging Lama, Dambin Jansang, who led a revolt of Mongols against the Soviet Communists colonizing his country, used Khara Khoto as his hideout.

Mongols believe the ghost of Dambin Jansang haunts the ruins to this day. Should we wait after sunset to meet him in the twilight? 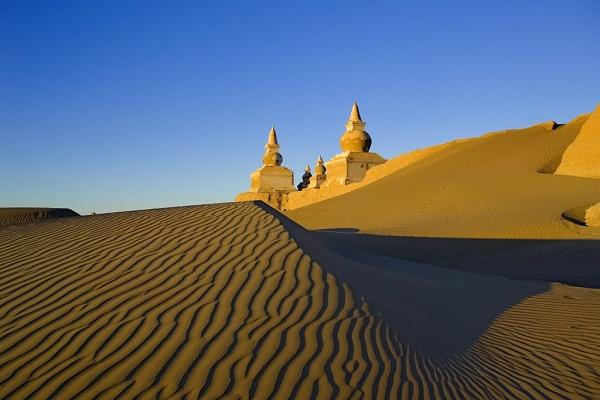 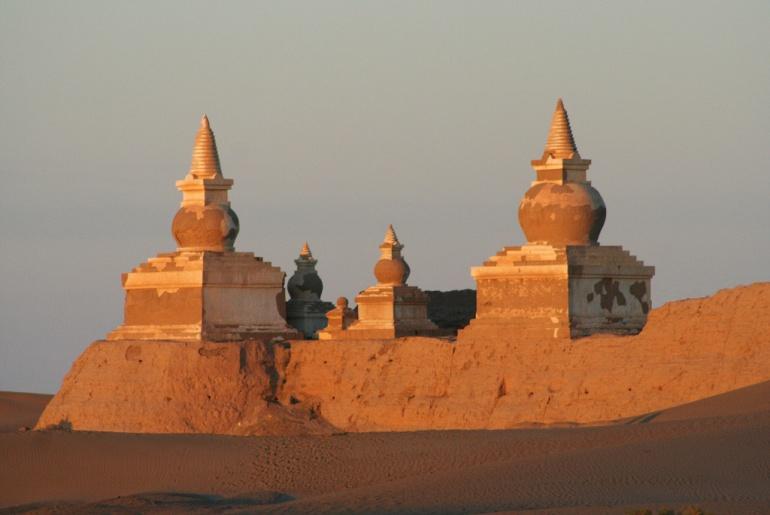 If you follow the Etsin Gol stream upriver (meaning south) for some 100 kilometers, you’ll pass by an amazing site: The Dongfeng Aerospace City and Jiuquan Satellite Launch Spaceport.

It’s closed to foreigners, of course, as this is where China launches its satellites and missile tests. But you can get close enough so that, with a good telephoto lens, you may get a shot like this: 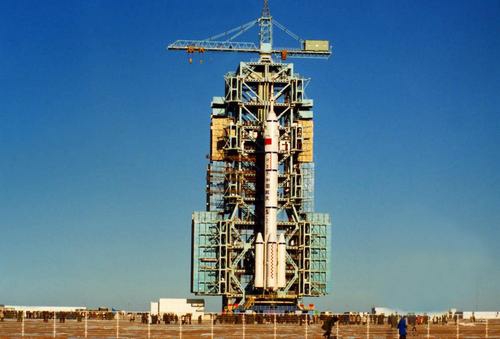 After this, you’ll plunge deep into the heart of the Chinese Gobi on 4WD Jeeps and through an ocean of sand called the Baidan Jaran (alternate spelling, Badan Jilin). Here we will find one of our planet’s great unexplained wonders: The Mystery Lakes of the Gobi.

Believe it or not, amidst a sea of gigantic dunes, among the largest in the world, are over 140 lakes, the existence of which has yet to be adequately explained. Here is a satellite photo:

Some lakes are freshwater, some are hypersaline. Most are pure cobalt blue. 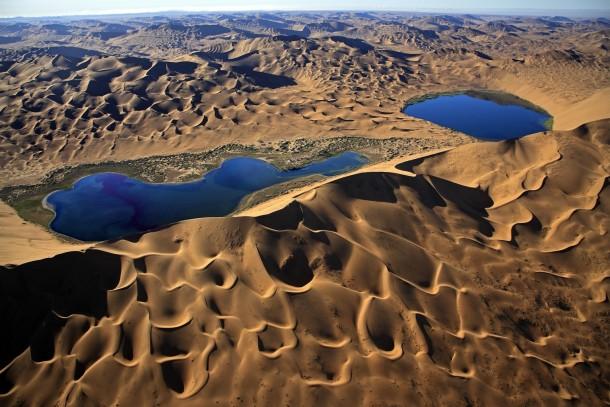 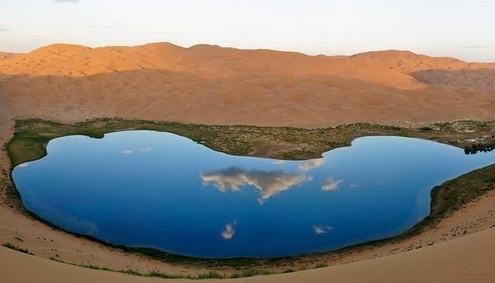 At one of the freshwater lakes is a centuries-old Tibetan Buddhist temple where the Mongol nomads come to worship. At the right time of year, the sun rises in a gap between the dunes with the temple in a magic shadow reflected in the lake.

I got a similar effect at sunset along a nearby lake:

And, of course, you can’t pass up a sunset ride along the dunes on the back of a two-humped Bactrian camel… 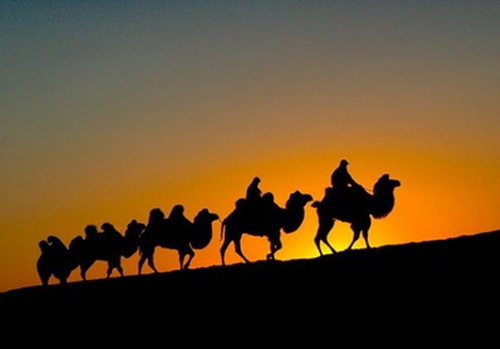 Exiting the Biadan Jaran, you’ll reach the “Hexi Corridor” between the Himalayan Escarpment and the Gobi, providing the route of the Silk Road connecting ancient China to the outside world. Marco Polo came through here in 1272. But hidden in the foothills of the Escarpment is a wonder Polo never saw – the Rainbow Mountains.

Called “The Earth’s Paint Palette” and “a geological wonder of the world” by Forbes Magazine, they have to be seen to be believed. The best time to see them is shortly after sunrise or before sunset. Here’s a quartet of mine – note, these are not photoshopped:

Deeper into the edge of the Himalayan Escarpment is the Yugu Tibetan Autonomous Prefecture. There, we will find a 1,000-year-old Tibetan cave temple carved into a cliff called Mati Si Horse’s Hoof Temple. It’s named after a celestial flying horse that landed here millennia ago and left its hoofprint in the stone.

It’s not built and suspended onto the cliff like Datong, but a series of caves with connecting tunnels carved inside the rock. We can have a cup of yak butter tea with the monks on one of the cave balconies and discuss how to get to Nirvana. 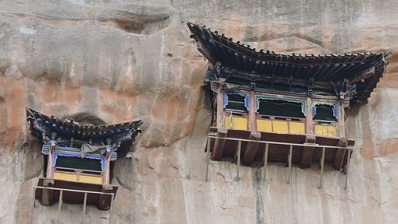 Our final destination of this exploration is the ancient caravan city of Dunhuang at the edge of the Lop Nor Gobi. It lies at the western entrance of the Hexi Corridor, at the junction of the Northern and Southern Silk Roads around the dreaded Takla Makan emptiness.

Marco Polo, with his father Nicolo and uncle Maffeo, took the southern route. He was stunned at the wonders of Dunhuang and it’s easy to see why.

Some 2,000 years ago, Buddhist monks began carving out, living in, and elaborately decorating caves in a cliff face called Mogao. For two millennia, the Caves of the Thousand Buddhas has been a pilgrimage site.

Today, they are the World Heritage Site of the Mogao Caves, containing the greatest repository of ancient Buddhist art on earth – “masterpieces of unparalleled aesthetic talent and unmatched historical value.”

Venture to the giant dunes of the Lop Nor Gobi a few miles away, and you’ll find tucked among the dunes a mirage. That is, upon first sight you’ll think it’s a mirage, but it’s real – Crescent Moon Lake with its wooden Chinese temple some 2,000 years old.

Very few Westerners have ever been here, even though it’s one of China’s most famous postcards and on the cover of many coffee table picture books on China. Here again is one of the Mysteries of the Gobi. You saw it at the start and here is where we end. 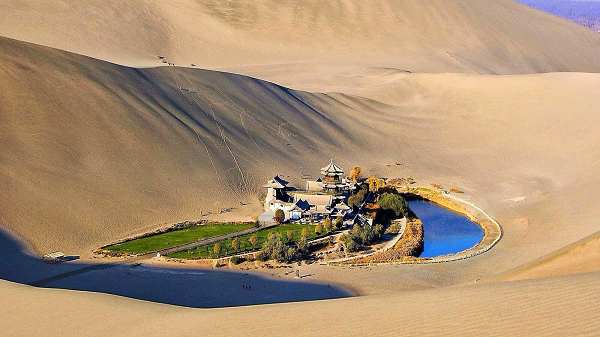 Why Your Next Vacation Should Include a Trip to Panama

Northern Philippines: Expected to Be a Center of Blockchain and a Cryptocurrency Hub in Asia