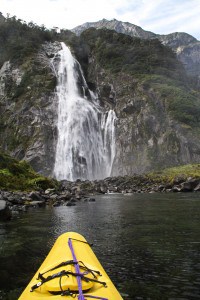 The first morning in Dehradun, Rael lead us in yoga on the balcony of our hotel suite. Despite having lived in New York for over seven years, I had never once attended a yoga class. I am an active runner, so I arrogantly assumed that yoga would not be challenging.  I was wrong.  Rael effortlessly contorted her body into positions that should be impossible for anyone who has joints.  Because I am not a yogi, and also because I am not an alien, after a certain point of stretching, my body reached its limitations and locked into place. When I hit this natural boundary, Rael placed her hands on my back and encouraged me to breath and reach even further.  My eyes watered as I stretched farther and farther in accordance to Rael’s instruction. Breath in, breath out. Nirvana is painful, I thought to myself.

The activity didn’t relax me as much as it exhausted me, but I felt very accomplished having warrior-posed against a backdrop of the Himalayan Mountains.  This was undoubtedly the most “Eat, Pray, Love” moment of our trip, and perhaps the only time I felt India had truly become the country I had previously daydreamed it to be. 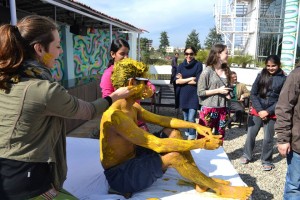 During the next two days, in preparation for the actual wedding ceremony, the bride and groom underwent a series of traditional Indian beauty rituals that were meant to optimize their physical appearance before the official nuptials.  The Mehndi Ceremony was the first of such traditions and involved the application of intricate designs onto the arms and legs of the bride, using a clay paste called mehndi.  Once applied, the paste hardens and dyes the skin underneath, leaving a deep red tattoo that lasts up to six weeks. According to Indian tradition, the darker the pigment of the tattoo, the more the groom will love his bride during their marriage.  In order to get the deepest shade of red, it is recommended that the bride allow the mehndi to set on her skin for several hours.  During this time, she must remain perfectly still.

The designs that cover the arms and legs of the bride are, of course, always the most involved.  However, the other members of her bridal party are also invited to apply Mehndi paste onto their bodies. Although we were technically members of the groom’s party, Neha was kind enough to invite us to partake in this beauty ritual.  Gabby and I opted for simple mehndi designs that covered the palms and backs of our hands.  As I waited for my mehndi paste to dry, I tried to remain perfectly still.  After twenty minutes, the muscles in my legs began to twitch impatiently, so I decided to use a hair dryer to harden the clay faster.  Luckily, I was not getting married, because as it turns out, twenty minutes is not a long enough time to achieve a dark pigment that could incite a lifetime of affection from any groom. 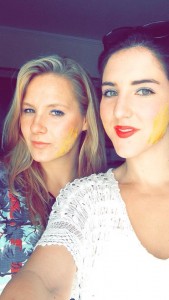 The Haldi Ceremony takes place the day before the wedding and is another ritual dedicated to beautifying the bride and the groom.  During this time, the family members effectively give the couple a facial.  Turmeric mixed with jasmine and sandalwood is applied all over the bodies of the betrothed.  The purpose of this ceremony is to promote relaxation and purify the skin.  I didn’t notice whether the haldi improved anyone’s skin, but it definitely smelled nice.

When the day of the wedding finally arrived, it was surreal.  We had been celebrating their marriage for close to a week, so it didn’t seem possible that Gaurav and Neha still weren’t actually married. Part of me believed that they would start their life together, have kids, become grandparents, and we would still be celebrating their wedding.

Of course, I was very excited for Gaurav to marry Neha.  She was beautiful, extremely kind, and even though we had just met her, it was clear that Neha would make Gaurav very happy.  And of course, witnessing two people commit their lives to one another is also very exciting, but perhaps even more exciting than that was having the opportunity to finally wear my sari. 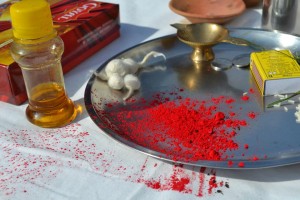 When I removed the sari from my suitcase, it was even more beautiful than I had remembered it being.  A member of Gaurav’s family helped wrap the sari around my torso.  The gold designs embroidered into the red velvet cloth outlined the curves of my waist perfectly.  The extra fabric that was folded and pinned at my thighs cascaded out of my velvet bodice.  A fountain of golden tulle sprung from the crimson cloth and rippled gently around my feet.  My arms were covered with red and blue bangle bracelets that matched the gold plated necklace tied around my neck.  A traditional Indian medallion was pinned into my hair and dangled down the front of my forehead.  If it weren’t for my blinding white skin and light green eyes, I could easily have passed for an extra in a Bollywood film. 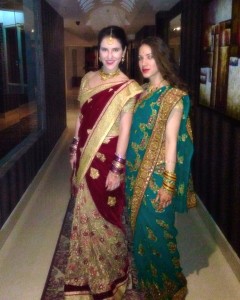 Indian brides traditionally wear red, and although my sari was closer to maroon, I was nervous that it would compete with Neha’s sari. Needless to say, that would have been in very poor taste.  At the first sight of Neha, I realized just how ludicrous my concerns had been.  She was undoubtedly the most dazzling thing in the entire wedding, and possibly even the most dazzling thing in all of Dehradun.  Her sari was red and embroidered with metallic designs that danced the length of her body and swirled like flames every time she moved through light.  A delicate red and gold scarf was pinned like a veil to the top of her head.  She had red and gold bangles that covered her arms like a sleeve, and her dark red mehndi tattoos were only visible when the bracelets would momentarily split apart and expose her skin underneath. Rings attached her fingers to her wrists, a head piece attached her forehead to her ears, and earrings attached her earlobes to her nose.  Everything, including the air around her, sparkled. She was the closest thing I had ever seen to a living, breathing jewel.

As members of the groom’s party, we were invited to participate in Gaurav’s Baraat.  The Baraat is the traditional procession of the groom and his family through the streets of the city as a grand entrance into the wedding celebration.  The level of grandeur exhibited during this event is determined by the bridegroom’s caste.  Gaurav and Neha are both members of the “ruling caste,” and therefore, Gaurav’s Baraat was extremely elaborate.  While we paraded through Dehradun alongside Gaurav’s closest friends and family, we were surrounded by a nine-piece band that played boisterous music to announce our arrival.  Gaurav rode behind us in a carriage that was pulled by a white horse decorated with extravagant cloth and gold medallions. In case the crowd of enthusiastic dancers, the nine-piece band, and the carriage pulled by a royal steed weren’t enough of an indication, fireworks were launched into the night sky to further announce Gaurav’s arrival. Between Neha’s sari and Gaurav’s Baraat, I was starting to suspect that the Indian people did not necessarily subscribe to the theory that  “less is more.” 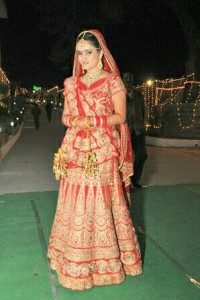 Gaurav’s Baraat was the clearest indication of the caste system I experienced during my time in India. As we celebrated through the streets of Dehradun, members of Gaurav’s family threw bills into the air that scattered on the streets as we walked.  While we danced and took photos of the glorious event, I watched as members of the nine-piece band interrupted their music to collect the bills that landed on the ground.  A crowd of people grew around us as we walked.  Citizens of Dehradun had seen the fireworks and understood that a “ruling caste” Baraat was underway.  They rushed to the scene where they knew the streets would be littered with money.  It felt like a scene out of history.  The townspeople had come out of their homes to cheer and watch as their prince was escorted to his wedding ceremony.  Gaurav would wed his bride, and in doing so, bring good fortune to the land. 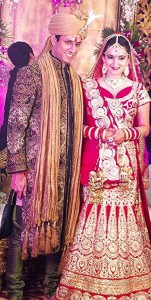 Compared to Gaurav’s Baraat, the wedding reception was much more modern.  There was dancing and food and a photo station. The scene was decorated very similarly to that of a Western wedding.  We spent the remainder of the evening wandering from one food station to the next, only interrupting our feast to join Gaurav’s sisters on the dance floor. It was a party.

Our flight was scheduled to leave on the following afternoon from an airport that was seven hours away from our hotel in Dehradun.  We booked a car that was scheduled to retrieve us at four in the morning, directly following the wedding reception, giving us a two hour cushion for traffic.  We were making our rounds, saying goodbye to all of the people we had met during our time in India, when we were informed that Gaurav and Neha still were not married.  The official wedding ceremony was to be held in the early hours of the morning, directly following the grand reception. I couldn’t believe it. Gabby and I had traveled all the way to India and we would not be present for the actual marriage.

Something about this ending seemed fitting.  India had been nothing like what I had expected.  Women in New Delhi wore jeans, Best Westerns in Lucknow were world-class hotels, cows dictated the law of the road, and public restrooms had holes in the ground where toilets should be.  So of course their wedding vows would be the nightcap of their marriage ceremony, instead of the opening event.  The more I considered it, the more my preconceived notions of India seemed silly.  If my most ”Indian” experience occurred on the balcony of a Westernized hotel, participating in yoga lead by an American instructor, perhaps what I had formerly determined to be a true Indian experience had been misguided.  I was learning that actually traveling to India was much different than watching Julia Roberts travel to India.  Perhaps this was because Julia Roberts went to India on a green screen. I may not have witnessed the official moment that Gaurav and Neha became husband and wife, but I had been there.  I had traveled to India, and I had a sari to prove it. 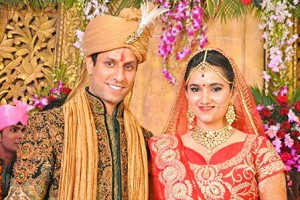 If you missed out on any of Emily’s other Adventures in India, you can catch up on the whole series:

Sari, I’m not Sorry: The Travels and Trials of a White Girl in India, Part 3

Life’s a Mirage at the Taj: The Travels and Trials of a White Girl in India, Part 2

Can I get a job if I move to Panama?