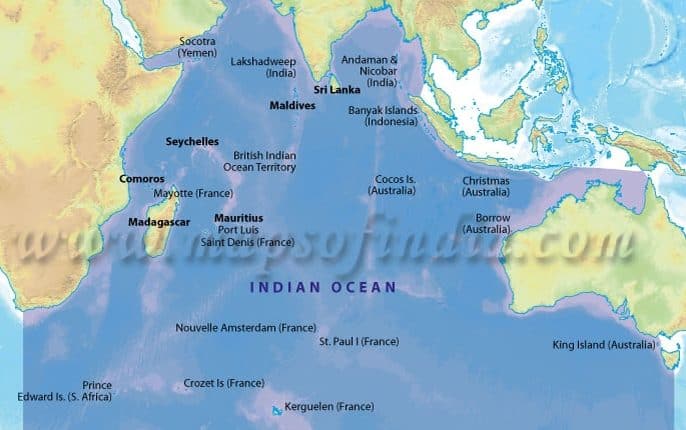 Saint-Denis, Réunion, France, Indian Ocean. The Indian Ocean is the world’s third-largest (after the Pacific and Atlantic, larger than the fourth, the Arctic) and far less known than its two big brothers. Eighteen countries currently border it, with the ancient land of India so predominant that the ocean itself is named after it.

Yet there is another country that has, for centuries, dominated the ocean far more than India ever did – a country that doesn’t border it but lies thousands of miles away in Europe: France. So much so that it should be more appropriately labeled the French Ocean.

Most people think that Western colonialism and imperialism ended in the three decades following World War II; that the term “Western colonial power” is a quaint anachronism. This is not true of France, which has maintained its worldwide colonial empire by direct or devious means right through to today.

From St. Pierre & Miquelon off Newfoundland, Canada; to St. Martin, St. Bart’s, Martinique, and Guadeloupe in the Caribbean; to French Guiana in South America; to Corsica in the Mediterranean; to New Caledonia, Wallis & Futuna (between Fiji and Samoa), Tahiti & French Polynesia, and Clipperton off the south coast of Mexico in the Pacific – the sun never sets on the French Empire.

Yet, it is in the Indian Ocean that French colonial influence most clearly dominates an entire region.

There are other players, of course. Australia owns the small isolated islands of Cocos-Keeling and Christmas, as well as the uninhabited sub-antarctic islands of McDonald-Heard.

India owns the Andaman and Nicobar Islands in the Bay of Bengal, and the Laccadive (or Lakshadweep) Islands off its west coast.

South Africa owns the uninhabited sub-antarctic islands of Marion and Prince Edward, the site of a suspected nuclear weapons test explosion performed for Israel on September 22, 1979 (called the Vela Flash, after the name of the U.S. satellite that detected it).

Great Britain owns the Chagos Archipelago, a group of tiny atolls and one main island, Diego Garcia, which it leases to the U.S. for a significant military air and naval base.

The Maldive Islands form an independent Islamic “Republic” – the scare quotes because the same families have ruled the place for centuries. Being a British Protectorate from 1887 to 1965 had little or nil impact. It’s composed of dozens of small atolls, many of which have been converted into scuba-diving resorts.

So now let us turn to France’s portion. Before we take a closer look, note (see the map above) this includes the largest of the sub-Antarctic islands, Crozet and Kerguelen, plus the smaller islets of Amsterdam and St. Paul. These are all uninhabited and are so remote that, although Crozet and Kerguelen contain more birdlife than any other place on earth, National Geographic has never had an article on them.

Here is the Western Indian Ocean: 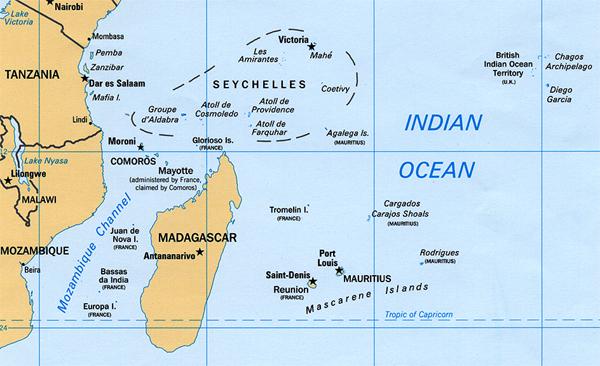 Mauritius and the Seychelles were given independence (1968 and 1975, respectively) after being British crown colonies since Waterloo. Prior to 1815, they had been French possessions – and weirdly, the Brits made no effort to supplant French culture and language with their own.

European explorers found the islands uninhabited. The Dutch named Mauritius (mo-rish-ee-us) after Prince Maurits of Nassau in 1598, but abandoned their settlement by 1710 after they had exterminated a large bird unique to the island, the Dodo.

By the 1730s, the French colonized it, followed by the Seychelles (say-shulls) in the 1750s – naming them after Jean Moreau de Séchelles, Louis XV’s Minister of Finance who financed the colonization.

They proceeded to populate them with Black African slaves. When the Brits took over, they freed the slaves and imported thousands of indentured laborers from India and China, especially to Mauritius where there were large sugar cane plantations. They made little effort to teach them English.

So even though the French ruled Mauritius for 80 years and the Seychelles for 60, followed by over 120 years of British rule for each, the folks there still prefer to speak French. How did those imperialist guys in Paris do this?

One word: Réunion. It’s pronounced ray-yoon-yawn. It’s an island the size of Rhode Island (about a thousand square miles) between Mauritius and Madagascar, which the French don’t consider a territory or colony but an integral part of France, like Brittany or Provence. Or what Hawaii is for the U.S. Except it’s 6,000 miles away on the other side of the world.

The Portuguese were the first to discover it in 1513, finding it uninhabited, naming it Santa Apollonia (after Apollonia, the Catholic patron saint of dentistry, which is a little odd), and kept on sailing east.

The French showed up in 1638, and by 1649 the descriptions of the island’s untouched beauty persuaded Anne of Austria, mother of and regent for Louis XIV (who was then 11 years old), to officially claim it with the new name Ile Bourbon (the name of the French Royal Family).

When the French East India Company started growing coffee there after 1715, African slaves were brought in by the shipload, along with laborers from Madagascar, India, Malaya, and China. During the French Revolution in 1793, the folks operating the guillotines decided to dump the hated Bourbon name and call it Réunion after the joining of the Marseilles revolutionaries with those of Paris a few months earlier (which enabled the revolution’s success).

By the Treaty of Paris in 1815, the French had to cede Mauritius and the Seychelles to the Brits, but in a fit of English magnanimity were allowed to keep Réunion. They spent the rest of the 19th century using it as their base to reconstruct the French Ocean.

Their first move, immediately after the Treaty of Paris, was to claim the 200-acre sandbank of Tromelin (after the chevalier de Tromelin, a French naval captain from the 1770s) to the north of Réunion.

They progressively colonized the Comoros starting in the 1840s. Then they targeted British Madagascar. By 1883, they got the Brits to sell out the Great Red Island.

They then proceeded to encircle Madagascar with tiny colonial possessions. Look at the Western Indian Ocean map again.

They nabbed the Gloriosos (two small coral islands and three rocks within a reef) in 1892, Juan de Nova (less than two square miles, named after a Portuguese explorer who first saw it in 1501), Bassas (Portuguese for shoal) da India (ten rocks inside a reef washed over at high tide), and Europa (ten square miles, after a British ship in 1774) – all three in 1897.

These four, together with Tromelin, are called the Iles Eparses, the Scattered Islands, and remain France’s colonial possessions today.

All during this, they made every effort to worm their way back into the culture and economy of the Seychelles and Mauritius – establishing Catholic schools which taught French, providing scholarships for study in France, subsidizing French businessmen, and underwriting French banks.

It went on unceasing decade after decade, an amazing attempt of imperialist perseverance in a region the rest of the world cared and knew little about. And it was all run through Réunion.

The island is unique – not just in the Indian Ocean, but the world. It has no native culture, like Tahiti and French Polynesia. The population is a polyglot mix, with everyone coming from somewhere else and never developing a culture of their own.

The Seychellois and Mauritians have done so, but not the Réunionnais, as the people call themselves. They are French, the place is just France-in-the-tropics, with bistros and baguettes and a million Renaults causing enormous traffic jams. The difference is the stunning physical gorgeousness.

It is a volcanic island studded with deep extinct craters covered in lush foliage and a myriad of waterfalls pouring wispily down their walls. A very active volcano, the Piton de la Fournaise (The Furnace), erupts frequently and spectacularly, with giant streams of lava flowing into the ocean. The last eruption started just this last April and is continuing. This photo was taken on July 13: 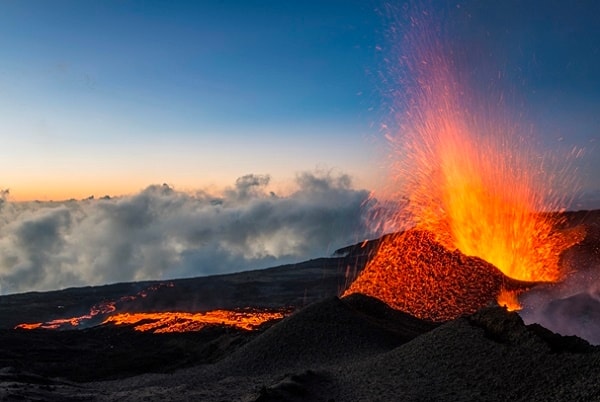 Much of the island is like a huge botanical garden. One third is covered by preserved native forest. Everywhere you look is a profusion of flowers – orchids, hibiscus, heliconia, bright red poinciana flame trees, purple jacaranda trees, yellow trumpet lilies, frangipani, and bougainvillea. Everyone’s home is surrounded by them.

The beaches are magnificent, with waves that attract surfers from all over the world. The breezes that sweep up the hills above the beaches attract paragliders worldwide, as do the lagoons offshore for scuba divers. Then there’s the deep-sea fishing and mountain canyoneering.

Which makes me think of two people I met, Jean-Francois and Petra.

Jean-Francois hails from a small town south of Paris, is a flight attendant for a regional airline called Air Austral, and as such has been living in Réunion for six years. Every opportunity he gets, he treks into one of the “cirques,” or crater amphitheaters, and explores.

“There are forests in some of the deep ravines that have never been touched by man,” he says.  “There is always something new to experience. In six years, I have not seen all the island.” Then again, there’s also para-penting (paragliding) at St. Leu, the endless parties with the beach bunnies at St. Gilles-les-Bains, the charming mountain towns like Hellbourg, the thermal baths of Cilaos (see-la-oos) up in the high plains of the interior. Jean-Francois is never bored in Réunion.

Petra always is. She’s from Vienna, Austria, married to a Frenchman, and all she can think of is Washington, D.C. For four years, her husband was the bodyguard for the French Ambassador to the U.S. It was non-stop receptions and soirees and diplomatic events, constant mingling with the Washington power elite and the cream of the ambassadorial community in the world’s most important city.

It’s all she can talk about. All she can think about is how much she wishes she were there again and how bored, terminally bored, she is here with her husband now assigned in Réunion. She’s a very nice and attractive lady – she’s the manager of the small hotel where my son Jackson and I are staying in Réunion’s capital of St. Denis – and it’s all so pointlessly sad.

There was just no way to rescue Petra from her determination to be unhappy in a real paradise.

For that’s what Réunion is. A French-made, French-preserved, totally French paradise. You’ve got to hand it to them. You’ve also got to admit, sometimes imperialism and colonialism work.

This is a marvelous and entrancing place on our planet, yet so little known. You owe it to yourself as an Escape Artist to consider exploring it. Here’s more enticement. [Note: I took these pictures.]

Réunion is renowned for its waterfalls: 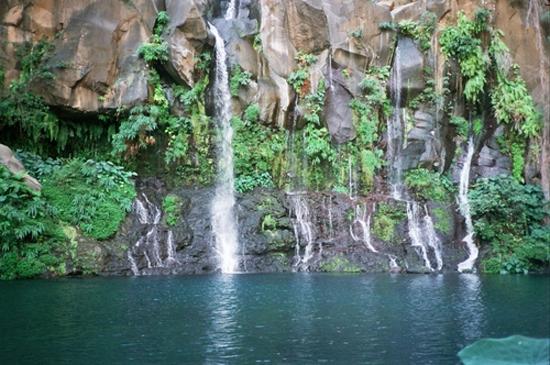 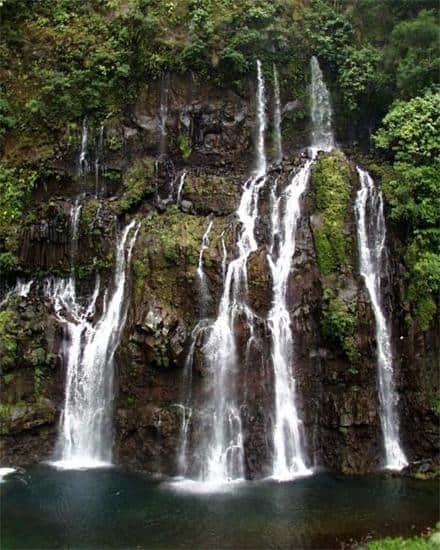 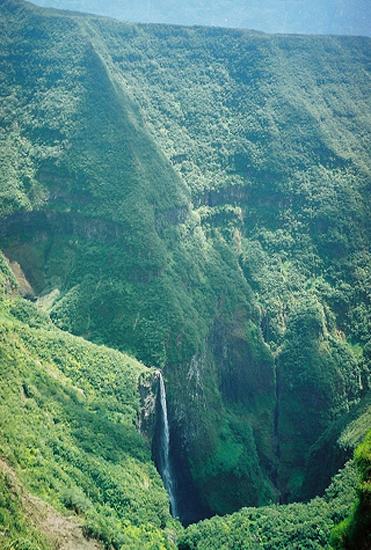 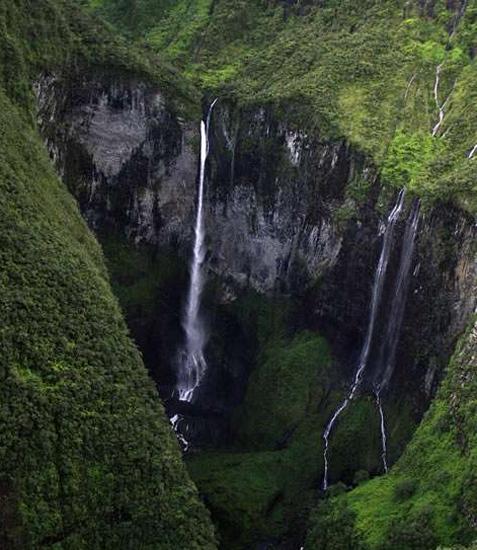 The homes always are be-flowered: 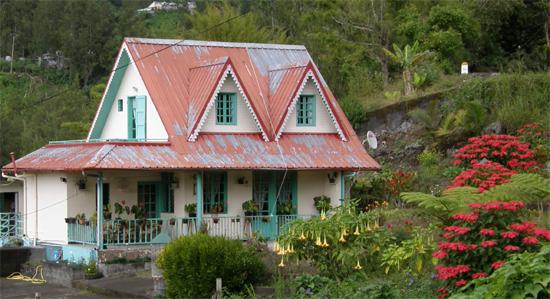 The beach at St. Gilles-les-Bains is always busy (but never crowded): 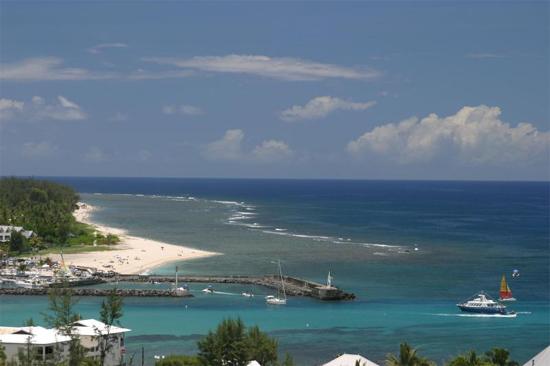 And lava from The Furnace is always flowing or threatening to. Here’s the BBC news photo of the eruption last April: 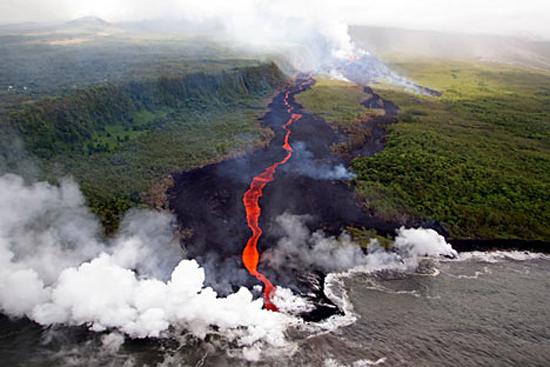 And here’s Jackson on an earlier flow from 2002: 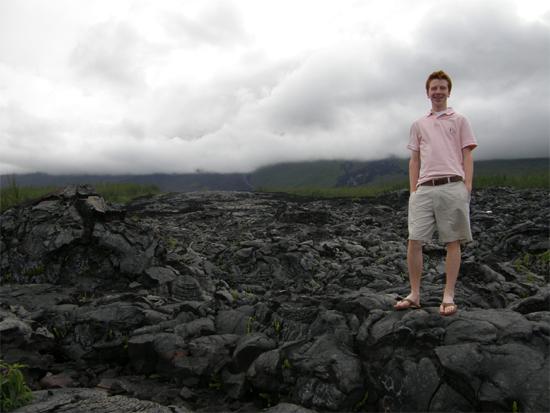 See why I think you should escape there yourself? 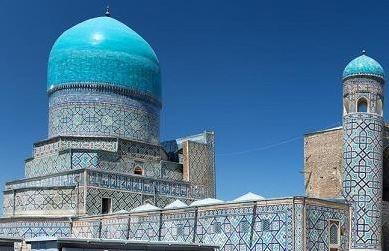 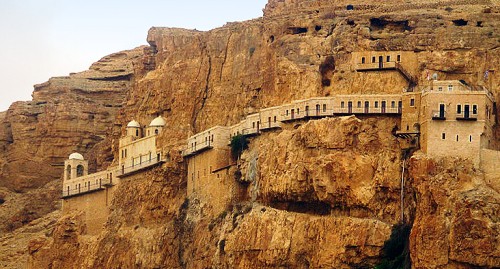 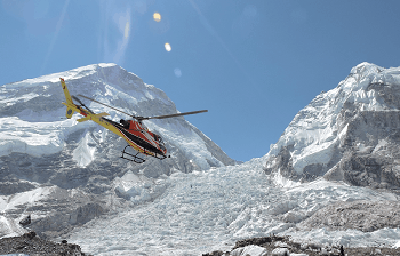 Nicaragua and the Best Handcrafted Ceramic Tiles and Bricks