The Azores: A Genuine Haven for Expats Considering Portugal 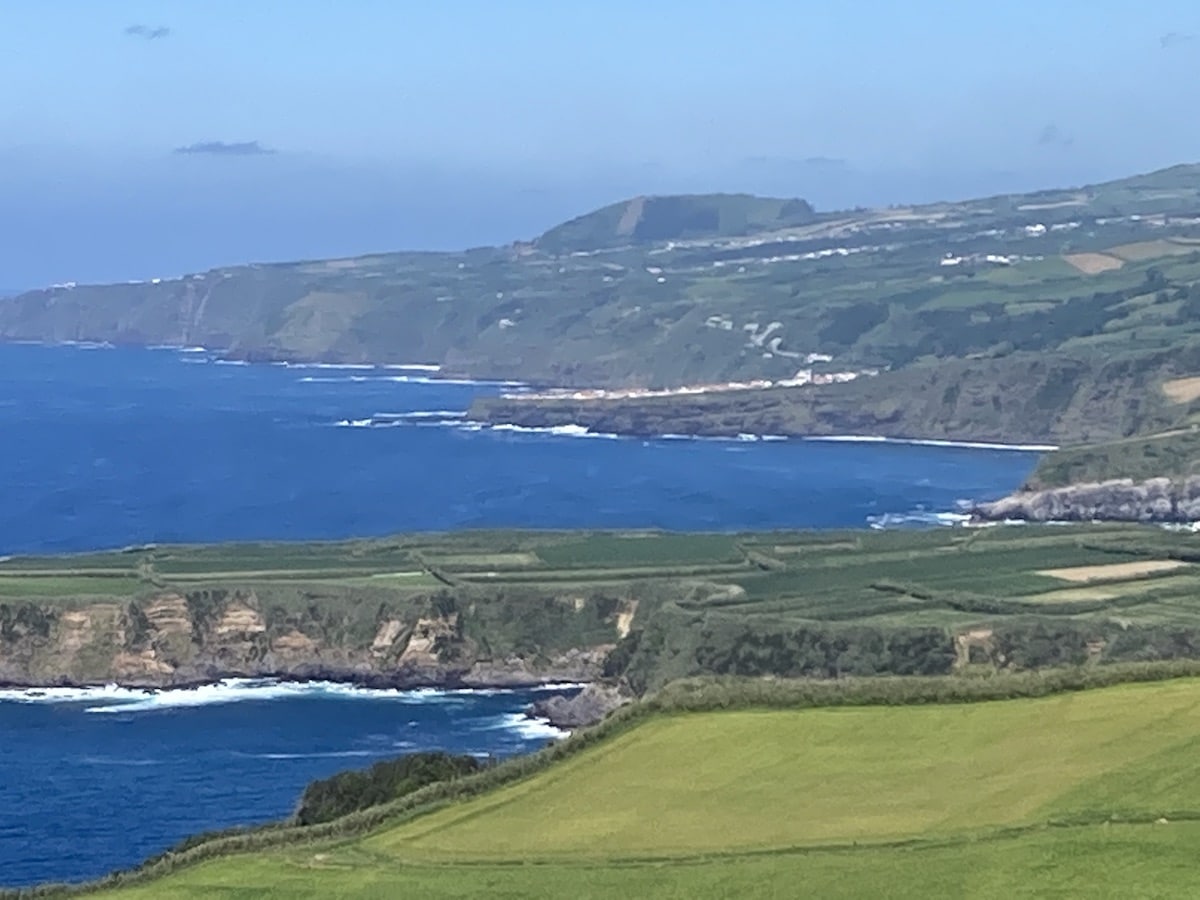 If Hawaii and Ireland got together and had a baby, it would be called the Azores. A set of nine beautiful volcanic islands 2-hours off the coast of Portugal boasts crater lakes, hot springs, and a lush green landscape. Palm trees and pineapple plantations are abundant. The main island is Sao Miguel, a spectacular destination housing the main town of Ponta Delgada, a picturesque town with the perfect blend of old and new. Shops, cafes, restaurants, parks, and an energetic waterfront area wait for your arrival. Here is where you will find the international airport. The islands are about two hours west of Lisbon, Portugal by air, and about four and a half hours east of Newark, New Jersey, and Boston by air. Basically, they are approximately two-thirds of the way across the Atlantic Ocean between the United States and Portugal.

A Wonderful Life in the Azores

Did you know the Azores produces tea? People think about India and Sri Lanka for tea, but incredibly there’s tea being produced in the Azores. On top of all the agriculture, you have incredible roads. The roads are world-class with excellent infrastructure everywhere. The internet is fast. The towns themselves are tremendous with unique old Portuguese heritage going back 500 years. Imagine this tropical environment with ancient Portuguese cities, where the cobblestone sidewalk are works of art. 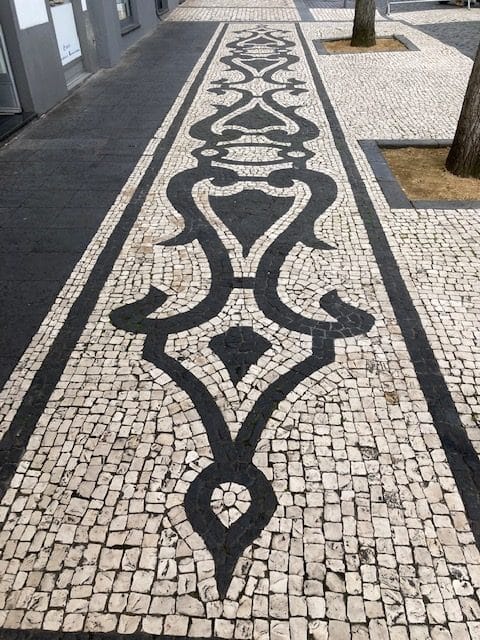 As you walk around Ponta Delgada or the town of Ribeira Grande, they’ve taken the sidewalks and mixed gray granite stone with white stones and created varieties of patterns. You walk down one street, and there’ll be a pattern on the sidewalk. And then you walk down another, turn a corner, and the pattern changes. In the big town square, the patterns are different—true works of art. 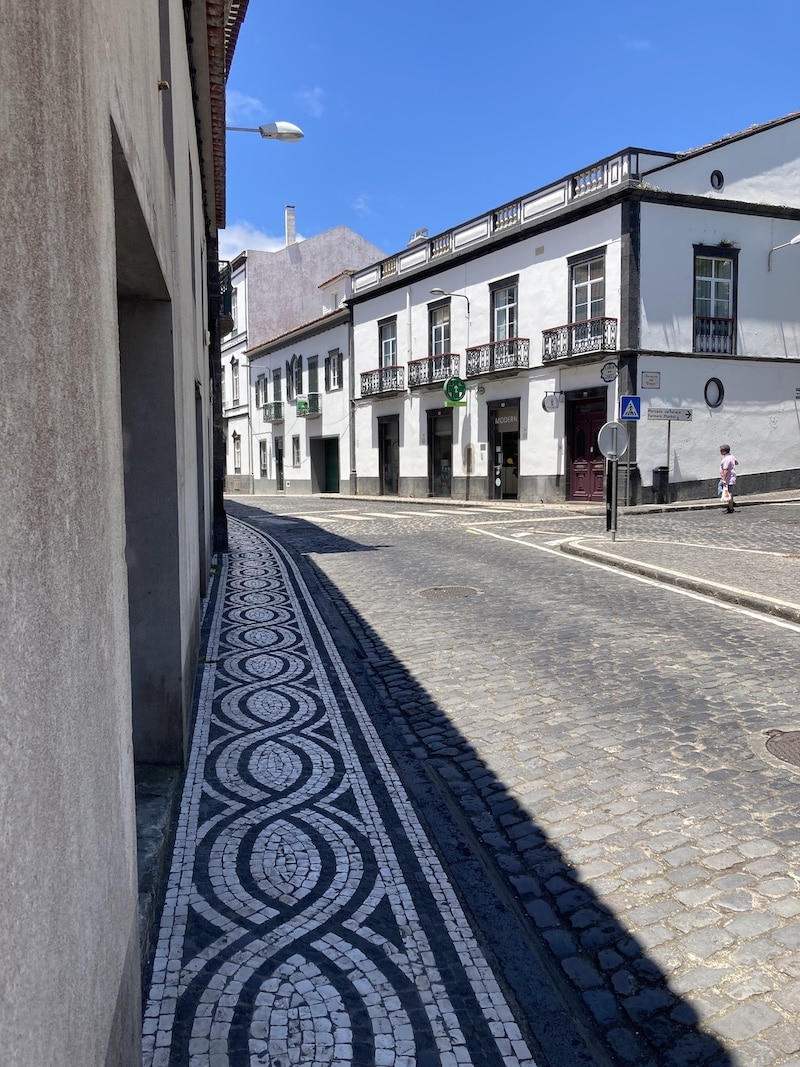 Leaving the city and you drive up across the island. It’s only 12 miles wide (20 kilometers).  When you get to the top of the ridge you’ll have views of the Atlantic Ocean in both directions. And nothing is very far away. The manor house B&B of Solar de Lalém in Maia is only 25 minutes from the airport. The green of the island with hydrangea growing wild at every turn is breathtaking.

The cheeses of Sao Miguel and Sao Jorge are world-famous. There are tons of dairy cows all over the fields. It’s beautiful in a way words cannot describe, adding to the charm of the destination. Both the old-world Portuguese charm mixed in with this lush green, verdant, very productive countryside around it, which includes everything from pineapples to tea plantations, to corn, to bananas. The temperature ranges are 50 to 70 in the winter (10 to 21 Celsius), 60 to 80 in the summer (16 to 27 Celsius). It never freezes. The temperature is always comfortable and a sweet spot in environmental climate positioning.

Why is ECI in the Azores?

ECI is now actively working in the Azores, specifically the island of Sao Miguel and the town of Maia. The B&B hotel recently acquired is about four miles (six kilometers) from Rivera Grande, the second biggest town on the island. Maia is one of the small towns belonging to that municipality, so they’re incredibly close together. 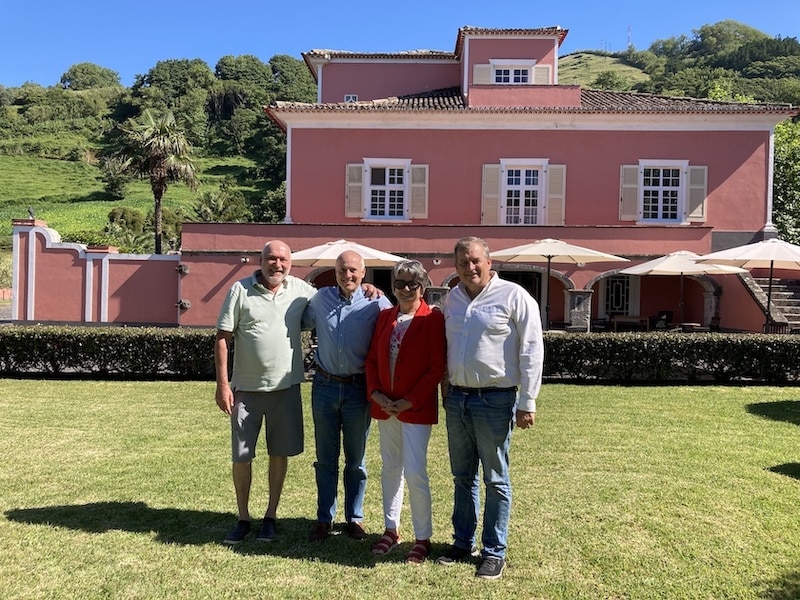 The reason ECI is in Portugal is because the country has an incredible golden visa program. For people looking for an EU residency, this is the easiest path by far. There are parts of Portugal where the investment amount to qualify for the golden visa is higher, like Lisbon, Cascais, and the Algarve. In some of those areas, they have received so much foreign investment in property they closed the program in certain areas. Other areas are still open at the €500,000 level.

The other interesting thing about the Azores—again, just in terms of support—is how the government subsidizes the cost of fuel, lower taxes, and the shipment of produce and goods from Portugal out to the Azores. Instead of having a brain drain, with young people leaving the island because there are no opportunities, they’ve made it extremely cost-effective—about 20 percent less than living on the mainland of Portugal—and Portugal itself is already on the exceptionally economical side of European living. Life in the Azores is exceptionally affordable. 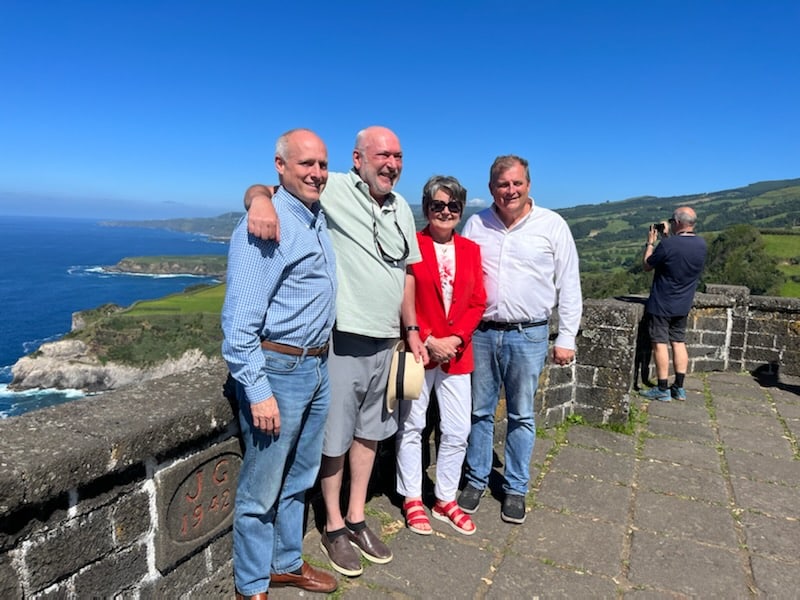 The golden visa investment in the Azores is €350,000. This investment qualifies you for Portuguese residency, which is EU residency.  It also can lead to EU citizenship.  Many people think, “Okay, Portugal, the Azores. This is my gateway to Europe.” However, when people come to the Azores, they’re going to look at this dynamic place and go, “Oh my gosh. This is incredible.” And probably end up spending a lot more time in the Azores because of the appeal, the character, the climate, the heritage, all those things coming together.

The property ECI owns is a Manor House that began construction as a chapel in 1687. The small area behind the chapel and the old kitchen were a place for the priest to live. Over the years, the home was expanded significantly and by 1850, the existing structure was finished. The property is graced with sea views overlooking the town of Maia and operates as a 12-room B&B. 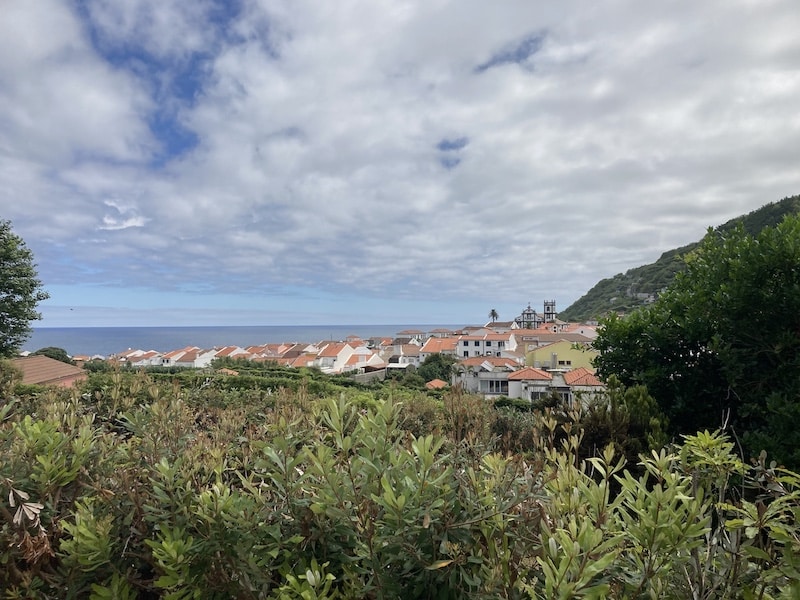 A German couple restored the Manor House and has been operating the property for the last 27 years.  There are two suites, five rooms in the main house, for a total of seven in the main house, four rooms in a garden house, and then a freestanding home, a two-bedroom home as well. The pool, beautiful common areas, a lovely library, kitchen amenities, dining facilities, gardens and the grounds are impeccably maintained. ECI purchased this property to begin offering a golden visa opportunity to U.S. and Canadians who would like to pick up an EU residency. 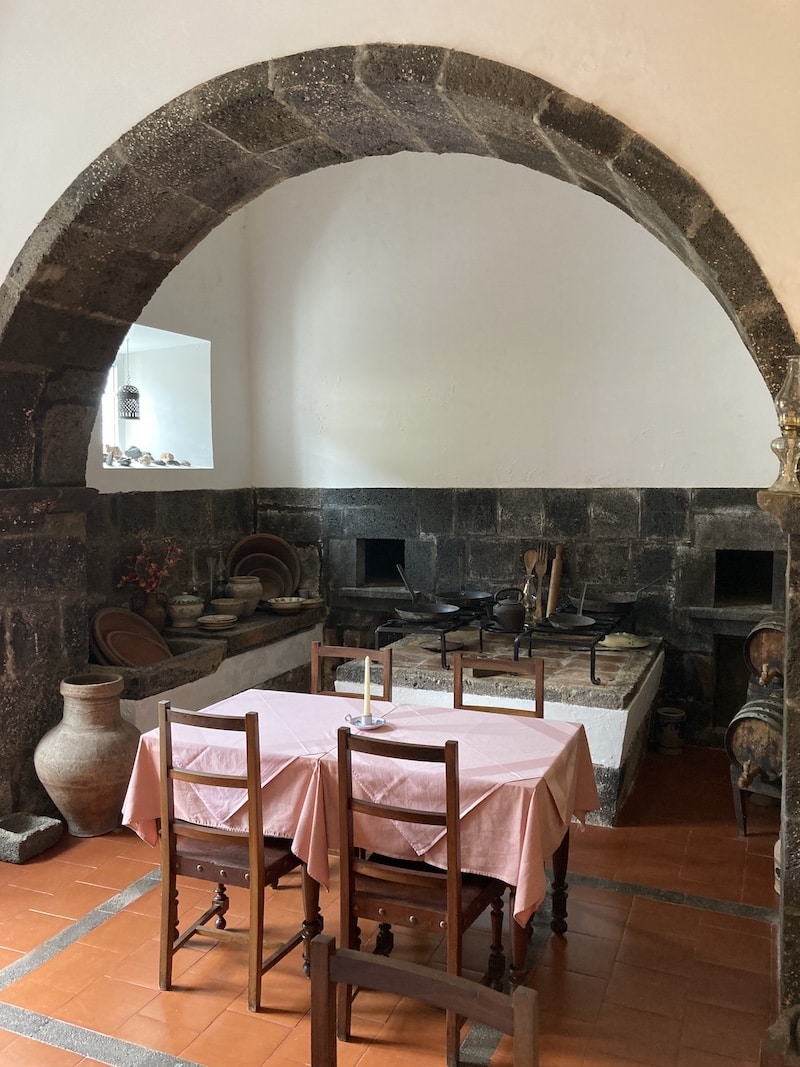 There are an additional three quarters of an acre of empty land along with the villa. That property will be developed as a residential community tying into the existing bed and breakfast at some point in the future. The idea is to build something new that retains the historical elements of the villa so that when completed looks like it was built in 1850 as well.

Starting a Business in the Azores

Everybody who’s moving is not necessarily retired. For anyone interested in opening a business or becoming a digital nomad, the Azores is an excellent choice. Attractive reasons for people to pick the Azores to open an office is the low cost of labor, compared to the rest of Europe. The incredible climate, the ease of access, great internet, impressive infrastructure, the electrical grid, the impeccable roads—it is world-class. Digital nomads who want year-round spring—which is what the climate is in the Azores—must check out this area in the Portuguese Islands. The infrastructure is what’s important—the electrical, the road, the transportation to and from the islands. The airlines and ease of access are also key.

Getting to and from the Azores

The Azores Airlines is SATA, and they fly internationally to Boston and Montreal regularly on a direct flight. United Airlines is flying direct from Newark, New Jersey, to Ponta Delgada. And on TAP, you can fly from New York, DC, Chicago, Miami, and a bunch of places, to Lisbon, and then connect back to the Azores. Flights from Newark and Boston are under five hours. It’s just over five hours on the way back because of the headwinds. Within Europe, Ryanair, TUI Fly, Lufthansa, Transavia, Iberia, and Swiss fly to the islands. The options to access the islands are many, and very affordable.

What’s not to Love? 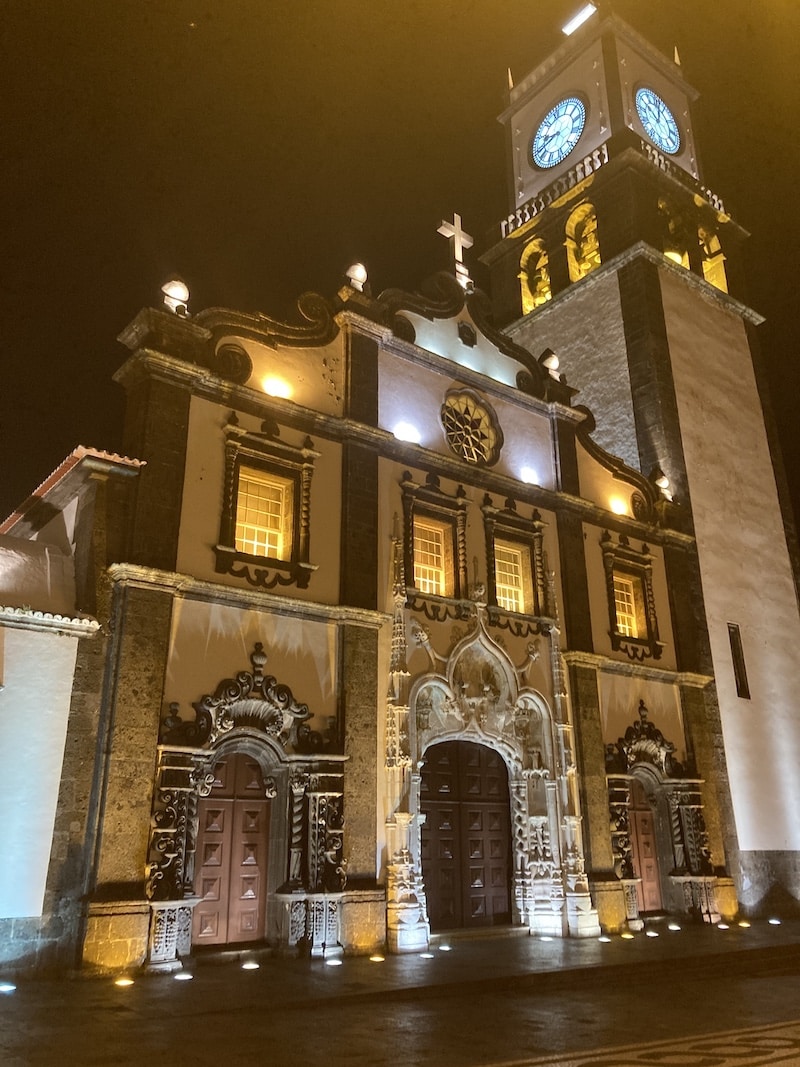 If Europe is in your crosshairs for relocation, keep your eyes and ears focused on Portugal, particularly the Azores. The perfect climate, exquisite food, affordable, laid-back European lifestyle, all wrapped up in an archipelago in the mid-Atlantic. At the doorstep of Europe, the Azores are an excellent opportunity to gain residency in one of the most desired continents on the planet. Request more information on Portugal’s Golden Visa program and set your Plan B in motion today.

9 Most Valuable Tips for Travel Beginners

Beaches in Ecuador and more !