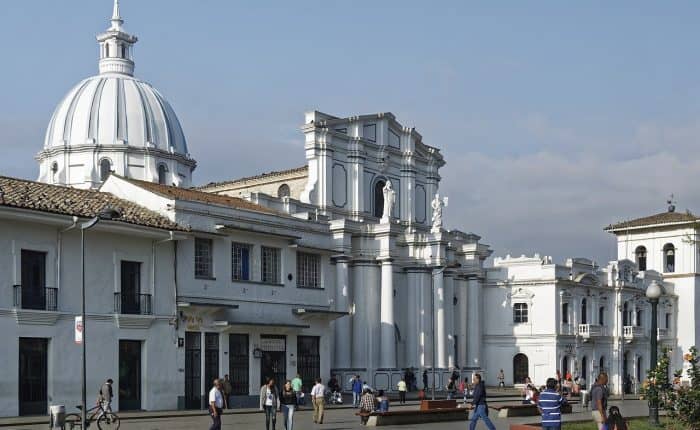 Known as La Ciudad Blanca or the White City, Popayan (Popayán) is located in southwest Colombia between the Western and Central Mountain Ranges. It is the capital of the department (state) of Cauca and has a population of approximately 260,000 inhabitants. The city was founded in 1537 by Sebastian de Belalcazar and it grew to become the most important location on the road between Cartagena and Quito, Ecuador and Lima, Peru. Popayan is the second most important Colombian colonial city next to Cartagena. It is known as the White City as the facades of the the entire colonial city are painted white.

The name of the city is taken from the local native dialect. There are a number of theories of the actual origin but one resident historian suggests that it comes from the Quecha language and was actually Pampayán – pampa meaning valley and yan – river.

During Colonial times the city was administered by a governor seconded to the ”Royal Audience of Quito”. In the 17th century wealthy sugar hacienda owners from the Cali region migrated to this region to escape the heat. They constructed mansions, schools, churches and monasteries As a result of this, coupled with its geopolitical location, Popayan grew into an important cultural and religious centre.

The historic city centre is considered one of the most beautiful and best preserved in Latin America. The central square is know as the Parque de Caldas named after one of the city’s most famous citizens, Francisco Jose de Caldas. On one side of the square is a clock tower or Torre de Reloj. Caldas designed the cloc, had it built and shipped from Croyden, England. Popayan is full of churches, cathedrals, museums and universities. In fact it has the highest number of churches per capita in Colombia. One of the oldest universities in the country, the University of Cauca, was founded here in 1827 by General Santander.

Almost every 80 years Popayan suffers a major earthquake. The last major seismic event occurred on March 31, 1983. This quake toppled many buildings and the reconstruction process took almost 20 years to complete.

In 2005, as part of the Creative City Network, UNESCO appointed Popayan as the First UNESCO City of Gastronomy. Here are some of the typical local dishes that you can try :

Hojaldras
Manjar Blanco (this is a sweet spread made from milk and sugar),
Dulce Cortado (a curdled sweet milk with panela, possibly cinnamon and coconut),
Natilla (like a flan or pudding made with milk, corn starch and possibly with raisins, cinnamon and coconut added),
Brevas (figs often served with arequipe).

Every Easter, since approximately 1558, Holy Week processions have been a tradition in Popayan. The right to take part in these processions as an effigy bearer is considered a privilege, often passed from father to son. These processions take place every night from Tuesday until Holy Saturday. Ancient religious images are paraded through the historical centre carried on wooden platforms resting on the shoulders of the ”Cargueros”, the individuals charged with the responsibility for shouldering the ”floats”.

The festival in Popayan is only second size in the world, after Seville, Spain. During Holy Week the city is also home to the Religious Music Festival and numerous arts and crafts fairs.

In 2009, the city was inscribed on UNESCO’s the Representative List of the Intangible Cultural Heritage of Humanity for its Holy Week procession.

Popayan is easily accessible by bus or taxi from Cali. There are also flights from Bogota to the local airport in Popayan.

I hope you got value from reading on our article: Popayan. If you would like to talk to our office regarding residency in Colombia, please contact us HERE.