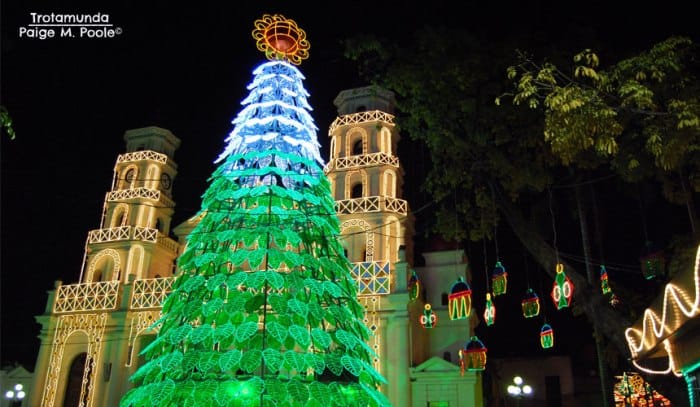 One of the wonderful things about Christmas in Colombia is that it is really Christmas !! Albeit we don’t have any snow but there is none of this wishy-washy, homogenous, Happy Holiday, whitewash nonsense that a once great festival has become in North America. No one here is afraid to say Merry Christmas – Feliz Navidad !! Colombia, of course is still 90% Catholic and traditions are still important.

The Christmas season begins on December 7 with the celebration of ”La Virgen de la Inmaculada Concepción” or the Virgen of the Immaculate Conception. This is also known as “El Día de las Velitas” or the Day of the Candles. This celebration links back to a decree made by Pope Pius IX on Dec. 8, 1854 but according to tradition, the custom has its origins in 431 in Turkey (then Ephesus) . As dusk rolls in, the Colombians line their churches, condo complexes, driveways, sidewalks, etc. to make endless rows of candles or lanterns. While the customs may vary slightly from city to city, generally this is a time for families to gather to bring in the Christmas season with music, drink and traditional Christmas fare like buñuelos and natilla. December 8th is a national holiday in order to allow families to celebrate and accommodate this Festival of the Immaculate Conception.

Colombians are ‘mad” for Christmas lights and go to extremes with their decorations. One of my favourite sights at Christmas is to see palm trees entwined with Christmas lights. The City of Medellin was listed in 2012 by  The National Geographic as one of the top ten spots in the world to view Christmas lights.

Christmas trees, while not part of the original Colombian Christmas culture have become assimilated into the festive season’s tradition starting around the mid 20th century.  Some families prepare their trees for the Day of the Candles. While others wait until December 16 and the beginning of the Novenas. Most are ready before the Day of the Candles as Christmas decorations go on sale starting about mid-December.

“El Pesebre”, the manger or nativity scene is everywhere you turn over the Christmas season. It is an integral part of “La Novena de Aguinaldos” or The Christmas Novena. Every evening beginning on December 16 and finishing on Christmas Eve, families, neighbours and friends gather to celebrate the Novena. The traditions may vary but verses are read from the bible and Spanish Christmas Carols called viilancicos are sung accompanied by simple rhythm instruments.

The Novenas were originally created for the founder of the School of Teaching – ”La Ensenanza” in Bogota by Fray Fernando Larrea Jesus in the early 1700’s. In the late 1800’s they were modified to include The Joys – ”Los Gozos”. The Novena honours Mary, Joseph, the Wise Men and the Baby Jesus. Just as the pilgrims sought shelter in a different location each night, varying members of the family may take turns hosting the Novena on different evenings. This is a very unique Colombian tradition that connects family and friends together in prayer and song as they await the arrival of Baby Jesus.

The term ”Aguinaldo” has different meanings depending in what Latin American country you encounter it.  In Puerto Rico and Venezuela it was an old form of Christmas Carol. In Mexico, apparently it is a monetary type of Christmas bonus. In Colombia an ”Aguinaldo” is a small gift that a business may give to a regular client. It is also a type of game that is played during the period of the novenas but it is important to note that this custom is not known to all Colombians, in fact some will contest that this is not a Colombian at all.

The word ”Aguinaldos” actually is derived from Latin and it means compensation for an achievement attained. In this case, the winner(s) of these games are given a small gift for their success in winning the match.

There are a group of different games that can be played. Traditionally if one is with the same group of friends or family for the entire 9 days, then you can play a different game each night and keep tab of the points until Christmas Eve. If perchance you are with a group only one night then you can keep track of points just for that evening.

Here are some of the games :

On Christmas Eve the points are totalled, the prizes distributed and the punishments administered.

The final eve of the Novena – Christmas Eve, is actually Christmas in Colombia – ”Navidad” or ”La Nochebuena”. This is one of the most important nights of the year in this country. Families gather together to await the arrival of Baby Jesus. The Christmas Eve dinner or ”La Cena de Navidad” might consist of a pork, or ham or even Ajiaco. This soup may be more of a tradition from the capital of Bogota.

If the families are celebrating in their country homes or ”fincas” – the meal might even include a roasted pig. Desserts will surely include ”Natilla” of ”Postre de Natas” as well as “Buñuelos” – a type of deep-fried cheese fritter and ”Hojuelas” – which are a light crispy fried dough pastry.

The children in Colombia are familiar with Santa Claus but generally, he does not come to most homes in this country. It is the Baby Jesus – ”el Niño Dios”, who brings the gifts. Earlier in December, the children may be encouraged to write a letter to Baby Jesus much like the traditional letter to Santa – Just a note to the believers. Santa still delivers!

The more devout Catholics will likely attend a midnight mass to celebrate the birth of Christ. This is called the ”Misa de Gallo” or the Rooster’s Mass because the rooster was the first to witness or announce the arrival of Jesus.

In other homes, toasts are made at midnight with fruit punch, local rum, champagne, aguardiente or ”micheladas” which is beer with lemon and salt.

After 12 a.m. gifts and best wishes are exchanged. The older children are given their presents and the younger children will awake on the 25th to find their gifts placed at the foot of their bed by Baby Jesus.

Midnight also brings the chorus of fireworks. The parties, the celebration and the fireworks, continue until the morning dawns.

Merry Christmas to all and to all a very, very long night!  Feliz Navidad !!

Here are a few more articles about Colombia that I’m sure you will enjoy reading:

Getting Residency In Colombia