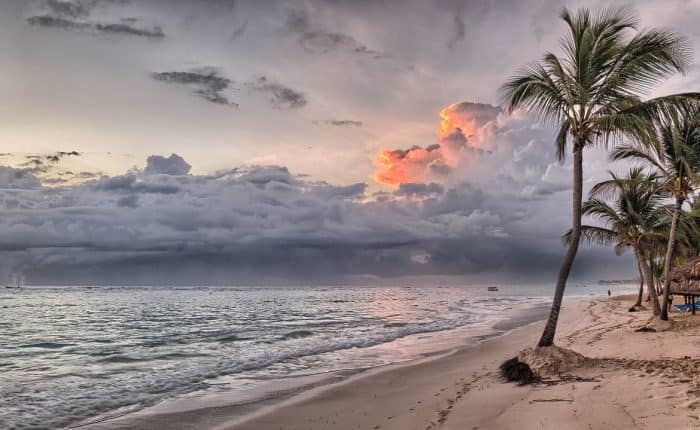 At 6 in the morning, I take my steaming cup of strong Dominican café con leche out to the porch and survey the sea. I have another hour and half before the local commuter traffic, on scooters, quads, pick-ups and buses, starts the parade on the paved beach road in front of the house. It is a wonderful quiet time, as I watch the sea.

My awesome appreciation for it is only matched by my daily amazement at the number of times that the mosquitos have bitten me during the night. They are a different sort than in the States, quietier, more laid back, dancing the bachante rather than dive bombing and singing rather sweetly. It is hard to begrudge them a few drops of blood.

For the past three months, the sea has been boiling, rolling and crashing over the reef, changing color from deep blue to putty-colored green with the churned up sand.

We have only had about a week of fair skies. It is, I am assured by everyone, highly abnormal. An aftermath, perhaps of the giant wave that devoured so many on the other side of the world. We are quite close to a deep sea cavern near Puerto Rico which scientists pinpoint as a perfect location for another Tsunami.

Friends who live on the hill behind town have promised to alert me if they see packs of beach dogs running for safety. The rains have made the streets muddy as only half of them are paved. Everyone is a bit cranky, especially the tourists who are only here for a week or two. Even the locals who keep the guests at the neighboring resort happily playing volleyball and bocce, oiled and massaged, seem a bit depressed.

There is not much to do here without the beach. One can shop at the few stores selling high end jewelry and expensive pareos from Indonesia or dine at one of the thirty restaurants offering the finest in Continental cuisine, albeit at Contenental prices.

Or, if the hotel is high end, flip through the 24 cable channels, Spanish primarily, with four in English, one French, one Italian, one German, testing out how well those audio-lingual courses that you took actually work. It is particularly amusing to watch movies with famous US stars, speaking the dialogue in other voices.

How odd and interesting it was to hear Eddie Murphy and Tom Hanks in Spanish, with completely different voices. But it is the more than 7 miles of coconut palm lined, amber sand beaches that have drawn most of us here.

The town of Las Terrenas on the Samana Peninsula, the northeastern thumb of the Dominican Republic, was only a small fishing village twenty years ago. An influx of foreign ex-pats, mostly French, have produced a boom in Dominican Republic real estate, with the construction of lovely concrete houses and subdivisions.

The local population has grown from 3,000 to 20,000 and the “foreign” population is now estimated around 5,000, predominantly French.  But there is a large Italian complement and many Germans as well, assuring a good supply of garlic and cabbage. English is hardly ever heard. Many of the Europeans are here for the entire winter.

There are fourteen real estate agents in town. Astonishing considering that all purchases must be made completely in cash. Prices have tripled in the last three years and it is hard to find anything for less than $100,000.

Prices in both dining and real estate have not adjusted to the fallen dollar, which was at 50 pesos last year but this year is hovering around 28. I was very lucky to find a beautifully furnished apartment at a long-term rental rate of $400. sI can walk to town along the beach. Electricity here is about twice what it costs in the States, five times what it costs in Europe. My luxurious full sized refrigerator with freezer is quickly identified as a luxury, along with my electric hot-water heater. I have taken to unplugging the heater during the days but the convenience of the freezer, guardian of half of every cooked meal, is a great boon.

I wanted a respectably large nation, not just an island I could circumnavigate in three hours. I wanted a proximity to the States so that my friends, primarily from the East Coast, could afford to visit. And access to the Internet available at a cybercafe. I wanted a place where Americans would be welcomed, something that is getting progressively harder to find.

The Dominican Republic may be one of the few places on earth where they still actually like us. Baseball has, after all been very, very good to them. Remittances sent home by Dominicans in the US are the second largest source of revenues, after the tourist boom. Phone rates from here to the US are the same as a local call, allowing me ample time to visit with my friends. Most of them, shivering through a bleak winter, were hardly sympathetic to my complaints about the rain and storms. Or that I had to scour the town for a sweatshirt to wear for riding on the back of the local transports, the motor scooters known as “conchos” that prowl the streets.

Primarily, I wanted warmth, with year round temperatures that stayed in the 70’s and 80’s. If I never see snow or ice again, I will be content. It will be perhaps a bit brutal here in July and August but certainly no worse than Washington, DC or NYC, as there is always a breeze from the sea. I wanted a friendly sea, in a place that had not been completely paved over and filled with high rises. Yet I did want a bit of tourist destination, with an influx of new energy and a rotating supply of books left behind in the hotels.

I wanted a town rather than a resort strip of all inclusive resort hotels. I had, by Third World standards, a healthy secure retirement income of around $3000 a month which allowed me a large range of choices in Latin America but increasingly fewer options in the West Indies. The blockade of Cuba put it out of the running for a while. I had already lived with the residual racism in the British territories and found it distasteful. Plus, I really wanted to live in “foreign” – i.e., non- English speaking environment. It would take me perhaps years to understand what they were saying. I was unlikely to be bored.

My decision was made when I discovered a French community as my French, after years of study, rivals my English and far exceeds my Spanish. The French, I knew, would have made the place picturesque and would have seen to a good supply of food.

The food in the DR is astonishing by any standards. In the high mountain valley to the west, near Pico Duarte, the tallest mountain in the Caribbean, farmers produce a sumptuous array of produce, citrus and tropical fruits, caulifower, lettuce, green beans and fresh tarragon along with the local assortment of strange and to me, still mysterious root vegetables. The prices for the imports are high. Peanut butter runs around $8 a jar. But the local fishermen ply the beachfront with buckets full of large fresh caught shrimp, mussels, and Dorado. Rice and beans, in a variety of different sauces, along with a small portion of chicken and a salad, the plate known as “The Dominican Flag”, is available for lunch at around $4.00 at the local restuarants. One cannot, however, drink the local tap water and the “touristas’ are not an uncommon ailment, although it does seem that Taino Indians are a little less vengeful than Montezuma.

Here in Las Terrenas, the French have added their bakery, producing baguettes, croissants, and napoleans. The butcher has his own farm, raising the beef, lamb, and chickens sold in his pristine white-tiled shop or the deluxe import-filled supermarket. Camembert and peanut butter, a full variety of imported wines and local beer, line the shelves along with the yogurt, butter and liverwurst that comes to us from Sosua, down the coast to the West.

Many of the “foreigner” are quite young, in their thirties and forties. There is a healthy population both of European and mixed European-Dominican children. It is quite common here to see an older “white” man with his beautiful Dominican girlfriend or wife, usually 20 years or more his junior, often with a full new family of multi-lingual children. Ads in the paper regularly ask for hotel staff who can speak four languages. Unless they own the place, foreigners are unlikely to make more than Dominican salaries, around $100 a week which is hard to live on. Many, however, have savings in dollar based certificates of deposits which yield an astonishing 25%.

Currently there are only 6 “United Staters” living here. The bulk of the English speaking ex-pats have settled to the west, near Puerto Plata. Yet the Samana Penisula is the most spectacularly beautiful area of the DR. Las Terrenas offers a touch of a continental lifestyle along with a frontier edge. So I am certain that more of you will arrive. Won’t you?

I hope you enjoyed reading this article: Life In A Dominican Beach Town: An American In The Dominican Republic. If you have any questions, please contact our office HERE.

Getting Residency In the Dominican Republic

Residency Options in the Dominican Republic

The Mango Diaries: 5 Alternatives to Investing in Cuenca, Ecuador

Is that a Banana? Close, but no cigar – That’s a Plantain!

Will an offshore bank account increase my chances of being audited?