Jean Laffite - a Real Pirate of the Caribbean - Escape Artist 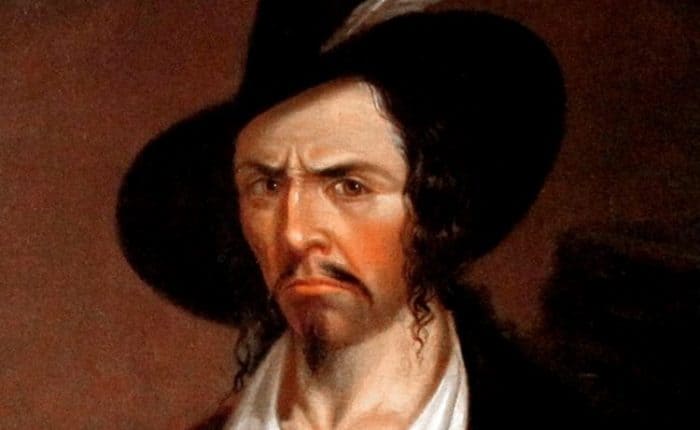 One short piece on Jean Laffite could never do him justice. There are so many myths and romanticized tales that almost two hundred years later it is difficult to discern what is fact and what is fiction.  He has been called “The King of Barataria,” “The Terror of the Gulf,” and”The Hero of New Orleans”.  There is a national park bearing his name, and below New Orleans, along the Mississippi River you will find the town of Jean Lafitte. Even the spelling of his name falls into question. Although this town uses only one ‘f’ in the spelling, copies of Laffite’s signature shows that he actually used two.

No one is 100% certain where he was born. Some say his family were Sephardi Jews that fled Spain in 1492, crossing the Pyrenees into France. From there they moved to Santo Domingo but the slave rebellion forced them to flee to New Orleans around 1808. Another version says that Laffite was born in Port-au-Prince of Santo Domingo (now Haiti) around 1782. His father had been a skilled leatherworker in Spain, France and Morocco before he opened a successful leather business on the island. This story has Jean having two older brothers, Pierre and Alexandre whom many people feel was the privateer known as Dominque Youx.

One final speculation has Pierre born in Bordeaux, France 1772, Alexandre in 1774 and Jean in 1782, although this one acknowledges that this may be a co-incidence as the Laffite surname and its many derivations is common in this area. One source, unsubstantiated said – ”At an early age he ran away from home, and joined a British vessel-of-war. His father pursued him, and brought him back. He absconded the second time, and joined the British frigate Fox. Here, after serving for some time, he deserted, and went to live with a French family at Deptford. He did not remain long in this family, but, finding quarters in a vessel for South America, he took passage, and went to Carthagena, and afterward to Santa Martha, which last-named place he for a time made his home. Here he managed to fit out a privateer, with which he often visited the coasts of the United States.”

Nonetheless what is known is  that Jean Laffite and his brother Pierre operated a large group of smugglers that brought merchandise, including slaves into Louisiana, via Grande Terre, an island in Barataria Bay at the mouth of the Mississippi.

Laffite and his crews operated under letters of marque, issued by the independence movements in Cartagena and what is now Venezuela. These marques or letters of writ were a legally binding contract used in the 18th and 19th centuries by newly emerging countries (including the American colonies)  who had no navy to combat their enemies. Basically they were licenses for mercenaries to attack, capture destroy and loot ships of opposing countries. Technically Jean Laffite and company were legal businessmen – or privateers.  As the Americans took over the Louisiana Territory, the Laffites posed numerous problems as their goods were entering Louisiana tax free. The governor had many issues with the Laffites and did his best to arrest the brothers and shut their enterprise down.

Early in September of 1814, Laffite was visited by some members of the British Navy. They were seeking his support in their planned attack on New Orleans as it was known that Laffite and his group had an intimate understanding of the bayous and waterways in that part of the country.  Jean reported the visit to the America authorities who rebuffed his attempt to assist. By mid September the Americans attacked Barataria and took over 80 prisoners and commandeered at least 13 vessels. Jean escaped much to the chagrin of the governor.

When Andrew Jackson arrived in New Orleans in early December he found the city under equipped to withstand the massive attack the British had planned.  One way or another Jean Laffite managed to convince Jackson to allow his men to assist in return for a full pardon. Stories exist that Laffite provided gun flints, powder and other supplies that the American defenders sadly lacked.

Again stories conflict as to the Laffites’ and the Baratarians’ involvement. Some certainly downplay their importance. However, it seems very probable that the Baratarians, no matter how small in number, were skilled fighters and artillery men and that they greatly aided the Americans to defeat a much larger and more skilled fighting machine.

One of the conditions of the Baratarians involvement in the Battle of New Orleans was a full pardon of their so-called illegal acts. Andrew Jackson did fulfill his promise and these pardons were granted.  Jean had hoped that along with this pardon, his property and merchandise that was confiscated in September would be returned to him but that never happened. In April of 1817, eight ships left Barataria Bay in search of a new port to call home.  They eventually established themselves on Galveston Island. The island was owned by Spain but Mexico was fighting for its independence.  The Mexicans struck a deal with Laffite. He could remain on the island and by accepting a privateering commission he could attack and capture as many Spanish vessels as possible.  Having previously set up successful smuggling rings, Laffite was able to generate contracts that were used to supply the the number of new towns that were being established inland throughout Texas. One of the slave runners was James Bowie who died a hero at the Alamo.

Laffite’s Galveston island operations proved challenging. The local natives were hostile and often raided the Laffites’ property. In late 1818 a hurricane devastated the island, sinking many ships and washing merchandise out to sea.  The island provided a magnet to many ”less desirables”. Additionally American diplomatic overtures were being made to Spain and the only obstacle was the continual harassment of Spanish ships off of the American coast.  In the latter part of 1820, President Madison sent a message to Laffite ordering him and his cronies off of the island. Laffite did not comply so a war fleet was sent in May of 1821 telling Laffite to leave or face the consequences. Overnight the island was set ablaze and the ships disappeared into the night.

Supposedly there is evidence that Laffite went to Charelston, North Carolina. Others say that he led a group of pirates in Santo Domingo and other stories say he died on the Isla de las Mujeres off the Yucatan Coast.  These are just a few of many stories. However what seems historically correct is that in 1822, Jean Laffite received a commission from Simon Bolivar and the Colombian Navy in Cartagena. He was given the General Santander to command and possibly outfit, once again to harass the Spanish shipping fleets. An official publication of Colombia, La Gaceta De Colombia XXIX, published on April 20, 1823 states that Jean Laffite was mortally wounded in a battle off the coast of modern day Honduras, late in the evening of February 4 and that he died shortly thereafter.

It is probably unlikely that we will ever know the true story of Jean Laffite, except that for a period he was a highly successful privateer. His life was entwined in the changes and developments that occurred throughout the Caribbean including participation, even indirectly in the freedom movements of Texas, America, Mexico and Colombia. For an excellent and well researched book on the Laffites  read  “The Pirates Laffite: The Treacherous World of the Corsairs of the Gulf,” by William C. Davis.

How To Quit Your Job, Travel, And Make Great Money

This is not a Scam: The IRS Starts Calling Expats