The Azores are one of the best places for whale watching in the Atlantic. 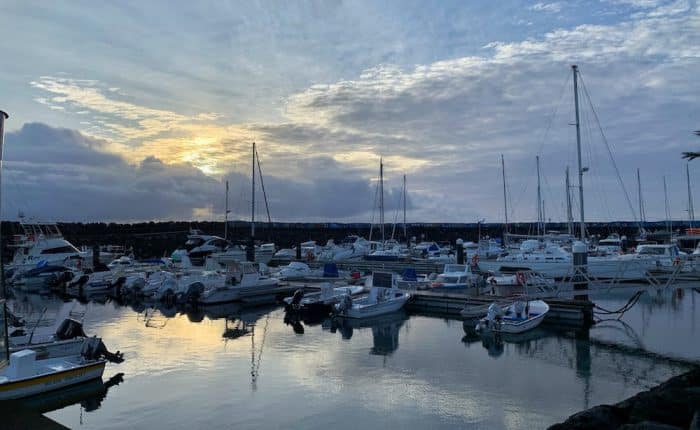 An Exciting Adventure In The Azores

Today’s adventure was an eco-expedition trip to see and learn more about Whales, Dolphins, Turtles, Fish, Birds, and the season’s marine biodiversity of the Azores Islands!

“Perhaps you would prefer to join the morning tour because the waters and the weather will be calmer.” Terra Azul, the whale-watching eco-expedition company based in Vila Franca do Campo made a great suggestion. Locals recommended them as the best company to go whale watching with in São Miguel.

The Azores is rich in marine life. Swordfish, yellowfin tuna, conger eel (quite tasty and common in Portuguese dishes), and the shark are noticeable for sportfishing.

The waters of the archipelago are also inhabited by several species of cetaceans, specifically dolphins, and whales, namely the resident sperm whales. Even the blue whale, the largest mammal on earth, migrates through the waters. These magnificent beasts can be seen near the coast, depending on the seasons, but the summer is best. The Azores are considered one of the best destinations for whale watching.

Whaling was developed in the early 19th century and became an important local industry, which ended up leading many Azoreans to the new world. The tale Moby Dick featured the port of Horta on the island of Faial in its pages.

Whale hunting has now been replaced by whale watching. This activity largely contributes to the growth of the tourism industry in the Azores. Every year more tourists will only return home after watching and photographing these enormous, soulful animals. Good photographs of the elusive whales are challenging to get.

Dual citizenship allows individuals the freedom to travel between the countries with relative ease.   If you are interested in exploring any Citizenship-by-Investment programs, or would like more information on the Azores, reach out to us today!

A debriefing is held before heading out to sea so you know how to conduct yourself on the boat and understand the significance and power of the ocean. The company has a good reputation for respecting the animals and keeping a far enough distance to cause minimal disruption to marine life.

Terra Azul offers a 98 percent success encounter rate of either dolphins, whales, or both. The ocean is a massive place. With a playground covering more of the planet than solid ground, there are many places for the animals to hide.

To find the pods of dolphins and mysterious whales, scouts spend hours in lookouts on land with binoculars, waiting and watching for the movement of dolphins or the blow of a whale. Terra Azul’s lookout high inland locates the animals and provides directions via VHF Radio to where the boat will travel at high speed.

Heading Out to Sea

A calm, partly cloudy morning welcomed us to the sea. The air was cool and full clothing with jackets was necessary. Some people put on raincoats and waterproof pants, just in case. I was more concerned about getting seasick, so we took precautions at the local pharmacy ahead of time. Eat light.

“If you are not feeling well,” announced Alex, our guide and a marine biologist, directed our actions, “lean over and feed the fish. They don’t mind.” Alex was her shortened name, as she told us her Portuguese name was too hard for us to pronounce.

We headed out of port anticipating the experience of a lifetime. Whale watching in the Azores is affordable at €55 ($59 USD) per adult in the offseason and €68 ($73 USD) per adult in the high season. Whale watching can price some people out of the market in destinations like Vancouver Island or San Francisco, where prices start around $150 per person.

There is something about being on the water. The sense of peace enveloped by excitement is therapeutic. You never know what the sea is going to bring. Weather can be unpredictable. Waves harness the power of thousands of horses. The blackness of the water hides what lies beneath.

Salt in the air lands on the lips and the skin like a film. Waves get louder as the vessel heads out of port and into the open sea. Increasing speed strengthen the winds. Most people secure their hoods to either tame their hair or stay warm.

It didn’t take long for us to stop and wait for something to appear.

The engine was cut, and the boat bobbed gently back and forth. A dorsal fin of a resident dolphin surfaced and then disappeared under the waves almost as quickly as it appeared. This pod of resident common dolphins of the Azores was a shy, small group. They were not social, stealthily slipping through the waves, doing their best to ignore us. Small waves offer camouflage for the dolphins as they look like a dolphin surfacing with their colours and angles. One must be alert while on these tours. 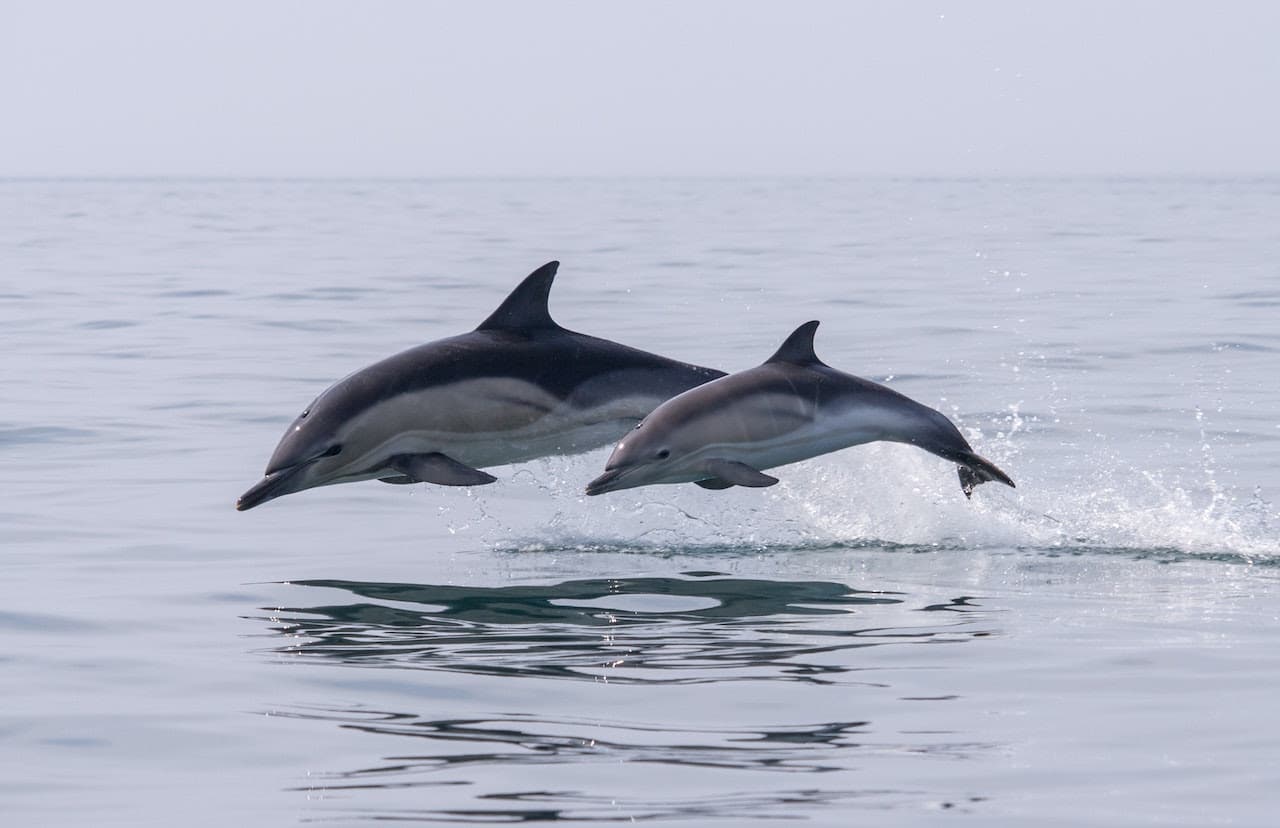 The best weather in the Azores is in the morning during winter months. Weather can change quickly. Clouds were brewing off the coast, and soon our lookout could no longer see the ocean from his peak.

“We are going to head out on our own to see what we can find,” proclaimed Alex.

At high speed, we coasted along the southern side of São Miguel. The sound of the waves splashing and the constant hum of the motor was like a lullaby. Eyes closed; sleep was close.

“This is where the whales are. They live here year-round. Keep your eyes open and watch for blow.” Alex continued to educate us on the sperm whale as we waited. She pulled out a miniature whale figurine to show us what they looked like and told us details about their anatomy, how they dive, what they eat, and how old they become.

“Do you know why they are called sperm whales?” No one knew the answer, or they didn’t want to answer. “Because a waxy substance was found in the top of the head of the male, and the whalers thought it was sperm. They thought this until they discovered females have the same oil, but the name stayed. The oil was used for many things like soaps and to burn as candles.”

Other whale tours were hovering out on the waters. Garbled voices came over the radio. Our boat turned sharply, heading in the opposite direction at high speed. All the boats followed suit. A beast was on the surface.

Within minutes all the boats stopped and cut their engines. Bobbing on the surface was a grey, shiny dome shape that looked like an oblong beach ball. Sperm whales float on the surface and then deep dive for food. We had two magnificent animals in our midst. Blow from their breathing sprayed water into the air. These massive animals are not jumpers, so you must wait patiently to see if you will be fortunate to see a tail once they decide to look for prey.

Shouts of glee erupted as a lone tail popped up from the surface, forcing the whale downwards. As quick as the tail was up, it was gone. Alex recognized this specimen from a white mark on his head. “He is 80 years old. Most whales only live to 60, but this one is an exception.” Eighty years is a long time to swim in the great big ocean. 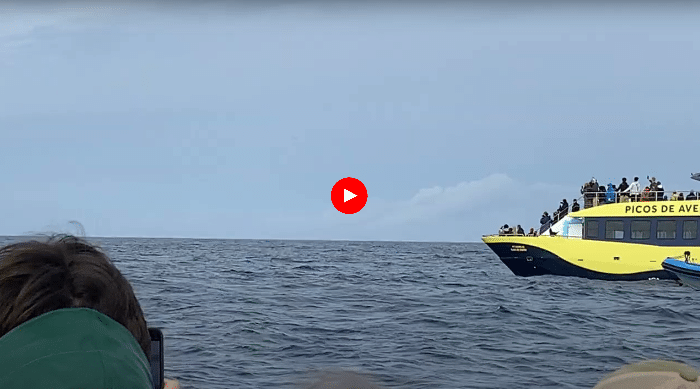 “We must head back. We are a long way from Vila Franca. Say goodbye.”

With that, we turned to head back from whence we came. On the way, we spotted a lively family of bottlenose dolphins that gave a great show. The pod was large, with probably around 20 members including adults, juveniles, and a baby only weeks old. Watching them all surface and jump was the perfect ending to a whale-watching adventure in the Azores. 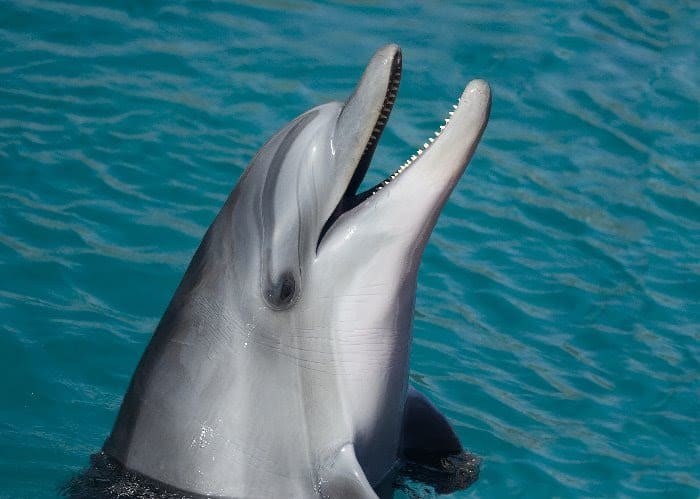 Do you want to be free like the whales and dolphins of the Azores? Consider a Golden Visa in Portugal as your gateway to Europe. Contact our experts today to get the process moving!

Here are some other interesting articles on Portugal:

Living in the Azores

A Foreign Incorporation Strategy for the Perpetual Traveler