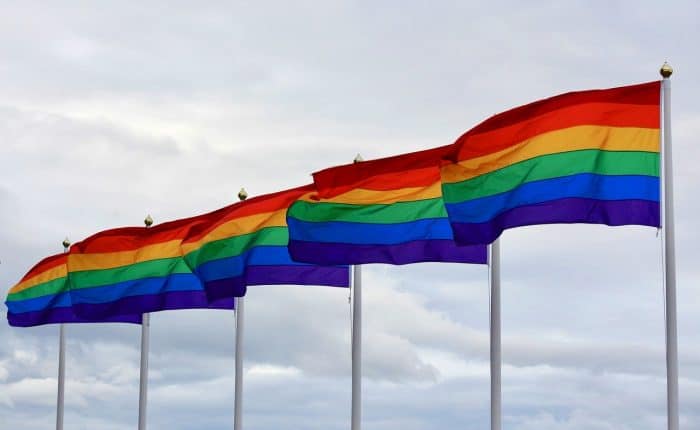 This Saturday in Mexico City was all about gay pride… one of the biggest gay pride celebrations in the world. A celebration being held since June 1979 and whose motto is “40 years living in freedom. We will not surrender!” More than 250,000 people took part this year.

Mexico City is home to the largest gay parade event the country. Each year, thousands of members of the gay community who come to the event to celebrate how far they have come. While gay rights have been slower to come in Latin America than the United States and Europe, Mexico City is one of the bright spots of the movement.

The march began at 10:00 am at the Angel de la Independencia and left for the capital’s Zócalo at 12:00 noon, with 80 allegorical cars (floats) adorned with the colors of the rainbow. Red, orange, yellow, green, blue and violet, as well as balloons, flags and thousands of people dressed in interesting costumes.

The march continued along Juarez Avenue, and ended in the  Zócalo Plaza, where a free concert with 22 artists was offered. One of the great presentations was from a gay choir from Mexico City, La Sonora Dinamita, and and Mexican Singer Fey.

The march was led by a large number of LGBT youths followed by emissaries from countries such as Holland, Australia and Canada, as well as civil organizations from different states of Mexico, diverse families, sponsors and in the end the motorized vehicles.

The incredible evolution that the gay pride parade has had in the last few years can also be used to showcase the progress that the fight for gay rights has had in Mexico. Mexico was once known to be a very closed minded macho male oriented country.

When Mexico City legalized gay marriage in 2009/2010 iit came to a surprise to many as there were still many members of congress who opposed the idea. The gay community fought hard to make it happen and they succeeded admirably.

The Gay Pride Parade in Mexico City coincided with Mexico’s victory against Korea in the World Cup. For an hour or two, the people who went to the Angel de Independencia to celebrate the victory of the national team and the gay pride parade intersected making the celebration even stronger. Some people saw it as a great merger between two different sides celebrating Mexico’s achievements in sport and social progress.

Shortly after midday the green shirts were mixed with rainbow shirts, nobody seemed to care about the upcoming elections, the disputes, the intolerance… For a time, it was one for all and all for one.

All of this happened eight days before the largest election in Mexico’s history, on July 1, to which 89 million Mexicans are called to elect a president and 3,400 positions. Many political chants were sung by the attendees who asked for the politicians to help them in the fight for equal rights.

On this day, institutions that defend human rights and civil organizations, including the National Council to Prevent Discrimination (CONAPRED), expressed their anger on the rejection of 28 crimes against people of sexual and gender diversity that occurred from January to June of this year in Mexico.

The message for the four candidates given by the attendees of the gay pride march was that: whoever wins the presidency must govern for all, including the members of the LGBT community.

Moments before starting the march, the head of government of Mexico City, José Ramón Amieva, mentioned that the theme of the march that this year marks 40 years is respect for the rights won by the LGBTTTI community.

“This city has always been and will continue to be a reference first of the free exercise of rights and second of the institutions that defend and guarantee those rights for all,” he said moments before the march began.

For the LGBT community it was a day to celebrate sexual diversity. 40 years ago, the first public march was held in Mexico City in favor of gay rights. The march is held on the anniversary of the “disturbance” in Stonewall where homosexual people who came to a pub, were attacked by a police raid. Thus, the first march was in protest against social and police repression. How far the Mexican community has come since then!

During this march, the AHF Mexico organization carried out 1,500 rapid tests for HIV detection.
According to figures from the World Health Organization (WHO), in the world, this virus affects 36.7 million people, of which 1.8 million are in Latin America.

Overall the march was a massive victory for everyone in the LGBT community. Mexico is one of the fastest growing countries in Latin America in the gay rights movements and if the march proved something is that this is just going to continue growing.

I Hope you enjoyed reading: The Gay Pride March in Mexico City. Here are a few additional articles about the LGBT Community in Mexico.

Getting Married in China? Don’t Get Sucked into the Property Bubble