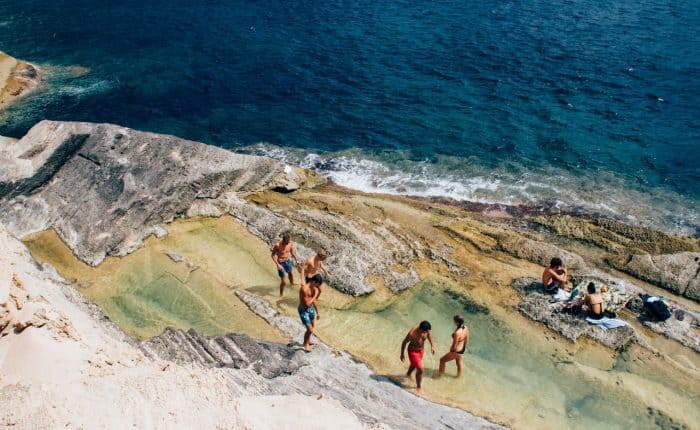 In March 2003 I found myself in a travel agent’s office together with my husband Charles and our seven-month-old son Kiran. England had been cold, dark, and rainy for the past six months and we felt that it was time for a family holiday.

Two weeks soaking up the rays on a Mediterranean island seemed like a very good idea. Given the choice between various last-minute packages to Mallorca, Menorca, and Ibiza, we breezily opted for the latter. Little did we know then that our whimsical choice was to be the beginning of a love affair that would see our life change dramatically within a very short space of time.

Ibiza is a small island (45 km long and 25 km wide) with a year-round population of 100,000 lying 90 km off the East coast of Spain. It forms part of a chain of islands in the Western Mediterranean belonging to Spain and known as the Balearic Islands.

The Balearic Islands consist of Mallorca, Menorca, Ibiza, and Formentera (a small island lying just off the South coast of Ibiza). Their easy accessibility (a mere two-hour flight from most European capitals) and their unique blend of culture, vegetation, beaches, and nightlife place the Balearics firmly at the top of the European holiday resort hit list.

In the summer months, Ibiza is host to a cosmopolitan mix of nationalities as tourists and seasonal workers arrive from the UK, Germany, Spain, France, Italy, Holland, America, Canada, Sweden, Australia, Israel, and other countries.

The island’s capital Ibiza town (or Eivissa as it is called in Ibicenco, the local dialect) was founded by the Phoenicians 2600 years ago and has been continually populated ever since. The two most remarkable aspects of Ibiza, its biodiversity and its culture, led to its declaration as a World Heritage Site by the United Nations Organization for Education, Science, and Culture (UNESCO). Ibiza has come a long way since the 1950s when cars were a rare sight on the island, and donkey carts were the common means of local transport.

The island today boasts an impressive, modern infrastructure including an excellent public transport network, an extensive mobile and fixed telephone network, mains water, and electricity in all towns and villages, high-speed internet access, and excellent travel connections to the rest of Europe and mainland Spain, by air and by sea.

When I boarded the plane a few weeks later, I had only a vague notion of Ibiza as a popular party destination that was famous for attracting clubbers, bohemians, artists, rock stars, and hippies alike.

In Britain, public opinion on Ibiza is divided between those who see it through the eyes of ‘Ibiza Uncovered’ (an infamous documentary that depicted the hedonistic party scene in the worst possible light), those who prefer to focus on its status as an uber-cool AAA-listers hang out (Jade Jagger and her two daughters are residents) and those ‘in the know’ who rave about the ‘unspoiled’ north with its Ashtanga Yoga courses and full moon impromptu drumming sessions on deserted Benirras beach.

Given these conflicting views, I was unsure exactly what to expect. Surely they couldn’t all be, right? After all, the island was tiny. How many Ibizas could there be?

Two weeks later Charles and I had fallen hopelessly in love with the island. We were intrigued by the cosmopolitan mix of people, the creative vibe, the beauty of the landscape, and the relaxed pace of Mediterranean life. Being free spirits ourselves we felt we had found our spiritual home. We were meeting British expats who were working in our fields (I am a freelance writer and Charles is a musician) in Ibiza.

Hey, if they are doing it, so can we, we thought. Before we really knew what had happened, we had agreed to rent the annex of a (newly made) friend’s villa for the summer.

Back in England, reality hit. We had a house. We had an income (Charles was working as a private music tutor and we were busy establishing our own holistic health business). We had family and friends nearby. When we started talking about going back to Ibiza for the summer season, people looked at us as if we were mad. But, as is the case with any whirlwind romance, we never really stopped long enough to doubt what we were doing.

We had a plan. Charles was going to try to find work as a musician and DJ and to supplement our income we were going to offer shiatsu massages and other holistic treatments. I was going to look after the promotional and administrative aspects of the holistic health business, as I had been doing in the UK already.

We shipped out Charles’ drum kit and DJ gear and packed the laptop. It would do as a makeshift, mobile studio. The large wooden freight box containing the drums was labeled San Jose (the village where we would be staying), Ibiza, Islas Baleares. For some obscure reason, the Spanish freight company chose to ignore the ‘Ibiza, Islas Baleares’ bit and instead shipped them off to an alternative San Jose hundreds of miles away somewhere on the mainland. They were lost in transfer for a good six weeks.

We were back in Ibiza (without the drums) in the first week of June.

A little more than a month had passed since that first fateful holiday. The first thing we noticed was how hot it was. For the next three months, temperatures would rarely fall below 40C (104F). The year 2003 had the hottest summer on record in Spain in 500 years.

Finding work as a musician did not prove to be easy, as there were only a handful of venues on the island offering live music. The DJ market was oversaturated as hopeful DJs from all around the globe had made the annual pilgrimage to Ibiza. Many were willing to spin their records for free, in order to beat the competition and bag one of the coveted jobs in the clubs and bars of San Antonio and Ibiza town.

After a few frustrating weeks, we decided that our main income would have to come from our holistic health business and that DJing and live to perform would have to fall under the ‘leisure/ fun’ category for the time being. Within a few weeks, marketing (flyers and posters) and word of mouth had ensured a steady business, and we were earning up to 150 Euros (US$180) a day with Shiatsu massages and other holistic health treatments (30 Euros an hour).

The Lifestyle Living On Ibiza

We easily adapted to the Spanish lifestyle, rising early when the heat was not yet fierce to do Yoga on the roof terrace with a view of the Mediterranean glittering in the distance. We ate a light breakfast (often just a milky coffee with a biscuit) followed by a late lunch around 4 p.m. All the shops were closed for siesta between 2 p.m. and 5 p.m. We usually had our evening meal at a restaurant around 10 p.m. The choice was huge, with everything from Japanese to Thai, to French to authentic Ibizan cuisine on offer.

Afterwards, the party crowd and the Spanish locals alike got ready for a night out. Most clubs only started to fill up around 1 a.m. and few went home before the early hours of the morning. One club, Space, in Playa den Bossa near Ibiza town, does not even open its doors before 8 a.m.

In the second article in this series, Katharina explains Ibiza’s appeal and explores its reputation as a “hedonistic Hippie haven,” plus she provides helpful info on getting there. Click here to read Part 2 of  “A Spanish Love Affair: Living on Ibiza.”

I hope you enjoyed reading this article: A Spanish Love Affair: Living On Ibiza.

Excerpted from “A Spanish Love Affair: Living On Ibiza” in Escape From America Magazine, Issue 73.

Move your Business to the Cayman Islands

Getting a Job Teaching English in Thailand, Part 1

Buying a Home or Property is a Multidimensional Investment Opportunity