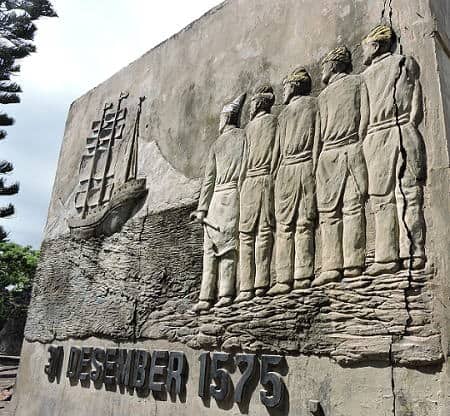 Ternate, Spice Islands of the Moluccas, present day Indonesia.  I am here in the place that started the Western exploration of the world.

It was the goal of Columbus in 1492 to get here – which of course he never did with the American continents getting in the way.  Vasco da Gama decided to try the other way around Africa – which he did, reaching the southwest coast of India in 1498.

By 1512, Vasco’s fellow Portuguese made it all the way – to the fabled Spice Islands, the only source on earth for nutmeg, mace, and cloves.  Since the Middle Ages, they were esteemed by Europeans for their medicinal and culinary properties.

As such, they were fantastically expensive, especially because the Arabs had a monopoly on the overland trade routes.  Breaking the monopoly with sea routes meant unbelievable profits.  So the Portuguese cashed in.  A pocketful of nutmeg seed pods could buy you a home.  Imagine what an entire shipload was worth.

Ferdinand Magellan convinced Portugal’s rival, Spain, led by Charles V, that he could break the Portuguese spice monopoly by sailing west – for by now (1518) everyone knew there was an ocean on the other side of the Americas, but no one had crossed it.  Magellan did it, but was killed in the Philippines in 1521 before he got here.

So the Portuguese got to keep the Spice Islands, where they built their first fort – called Kastela – here on Ternate in 1522.  The Spanish found there were almost unimaginable amounts of gold and silver for the taking in their new colonies along the west coast of South America and forgot about the Pacific Ocean.

Fifty years later, history was about to shift.  The Spice Islands were ruled by a Moslem Sultan from his capital, which was here, thus known as the Sultanate of Ternate.  Tired of being manipulated by the Portuguese, Sultan Hairun in 1570 stopped taking their orders, whereupon the Portuguese soldiers in Fort Kastela killed him.

This sparked a rebellion among the Ternatese, led by Hairun’s successor Sultan Baab Ullah who forced the Portuguese to surrender, pack up, and leave by the end of 1575.  You can see this in a monument amidst the ruins of Kastela: 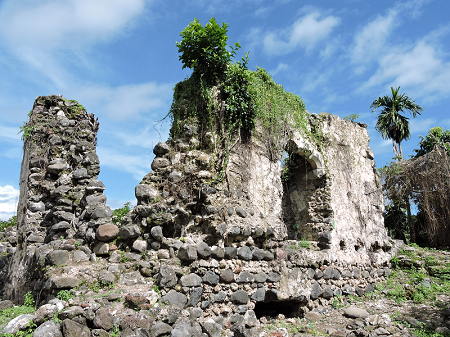 By now, England had gotten over the mess that Henry VIII made (he died in 1547), which  his daughter Bloody Mary made worse (she died in 1558), with Mary’s half-sister Elizabeth well on her way to launching the glory of the Elizabethan Age.

And out of nowhere came a plain commoner, the son of a peasant farmer in Devon, who helped her create it.  His name was Francis Drake (1540-1596).  He turned out to have a genius for commanding men at sea – and to use his talent against Elizabeth’s principal enemy, Phillip II of Spain. 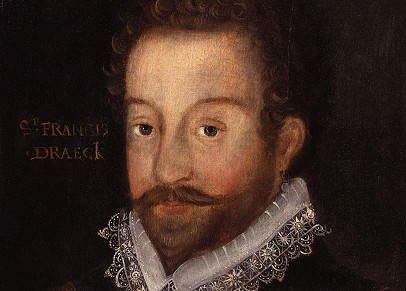 Recall that Phillip’s Spain was rich because of the fabulous treasure pouring out of the west coast of South America – which had to be transported across the Atlantic.  That meant it had to first be taken on muleback across the Isthmus of Panama to be loaded onto Spanish galleons at the port of Nombre de Dios.  Drake took advantage of this critical point of vulnerability, and returned to England in 1573 with tons of Spanish gold.

(Historical aside:  It’s hilarious that Spanish historians smear Drake as a “pirate” – as if the Spanish gold wasn’t stolen from Indians and mined via Indian slave labor.)

This earned him an audience with Elizabeth, to whom he proposed going to the source – an expedition to South America’s west coast to directly deprive Spain of the gold that enabled Phillip to be such a danger to England.  She agreed.

With the Queen’s support, Drake easily acquired investors to fund what was to become one of history’s most epic, consequential, and remunerative sea voyages:  The circumnavigation of the world by Drake’s The Golden Hind.

Note that after capturing boatloads of Spanish treasure – one galleon alone, the Nuestra Señora de la Concepción, held six tons of gold – Drake sailed all the way to Oregon searching for the non-existent Northwest Passage.  In June of 1579 he landed at what is now a US National Historic Landmark, Drakes Bay at Point Reyes just north of the Golden Gate.

The white cliffs of the bay reminded Drake of the White Cliffs of Dover, thus he claimed for England all the land “from sea to sea” (from the Pacific to the Atlantic, most of the US today) as Nova Albion (Albion – “white” – is the original name for Britain).  Drake’s is thus the original European land claim for what is the US, for the only European to precede him was Juan Cabrillo in 1542 who landed at San Diego and islands like Catalina but made no claims for Spain.

Drake then captained the Golden Hind across the Pacific to land here at Ternate in early November, 1579.  Proclaiming himself no friend of the Portuguese, he was welcomed by Sultan Baab Ullah.  There is a famous engraving of his meeting with the Sultan: 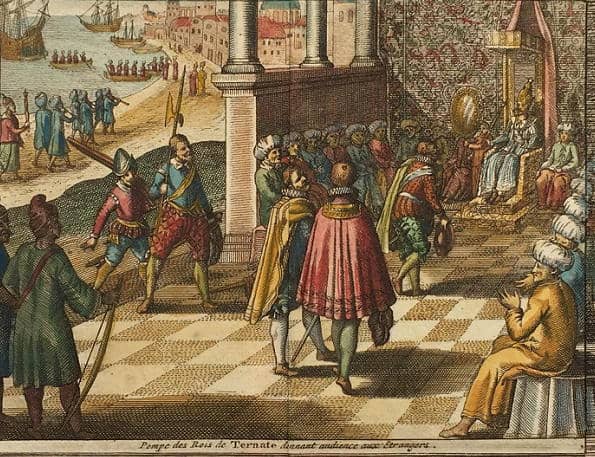 The legend is that the Sultan was shocked to learn Drake had no interest in his cloves, for which he had a world monopoly that had made him fantastically rich, because the Hind was too full of Spanish gold and silver to load them aboard.

Yet Drake, in his book on the voyage with notes by the ship’s chaplain Francis Fletcher – The World Encompassed – records that the Sultan gifted him with at least a ton of cloves for British protection against the Portuguese.  Drake’s crew members were deliriously happy as Drake gave them each a hefty portion worth a fortune.

On September 26, 1580, Drake and the Hind sailed into Plymouth Harbor.  On April 1, 1581, at the Deptford Wharf on the Thames in London, Queen Elizabeth herself boarded the Hind to bestow a knighthood on its heroic captain, forever to be known to history as Sir Francis Drake.

Please consider reading “Why the Knighting of Sir Francis Drake Should Be Commemorated” for its historical significance.

He had earned it.  In addition to completing the first circumnavigation of the Earth as captain and leader (Magellan’s was completed by his remaining crew), the Royal share of Drake’s treasure doubled Elizabeth’s income for the year, paid off all her government’s foreign debt, and enabled her to begin financing the Queen’s Navy for the war with Spain she knew was to come.

And come it did, with Phillip II amassing a gigantic invasion force, the Spanish Armada.  With blessing of Pope Sixtus V, Phillip’s goal was to overthrow Elizabeth, England’s Protestant Queen, and force the English people to be Catholic once again.  Elizabeth placed Drake in co-command of the fleet, for which he designed a new form of warship, the “race ship,” much lower, faster, and more maneuverable than Spain’s lumbering galleons.

By April 1587, Phillip’s Armada was ready to depart for the Channel from Cadiz.  But then Drake and his race ships conducted a series of raids on Cadiz known as “Singeing the King’s Beard,” destroying over 100 Spanish ships and setting Phillips’ invasion back for a year.

The full invasion came in August 1588, with Drake’s race ships and the rest of the Queen’s Navy decimating the Armada in the Battle of Gravelines on August 9. In it, and the Armada’s retreat with storms forcing it north, half of its ships were lost with 20,000 (out of 30,000) soldiers and seamen dead.  Many of the survivors rescued on Ireland’s coast settled there, with their descendants becoming the Black Irish due to their darker skin.

These two exploits of Drake placed England on its path to becoming a world superpower with an empire upon which the sun never set.  And it started here in Ternate, at the historical intersection between an English commoner and a Sultan.

It is with some irony that Ternate was to play another epic role in history some 280 years after Drake’s visit.  By this time, Ternate and all of what is now Indonesia was a colony of the Netherlands known as the Dutch East Indies.

It happened in this home: 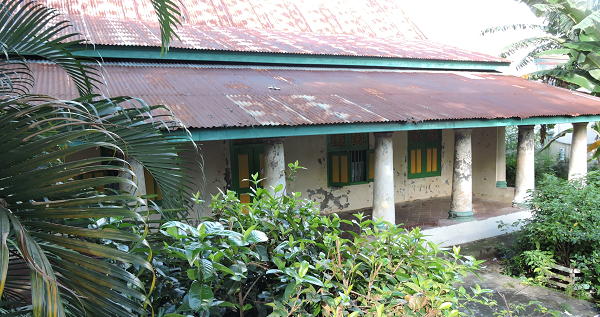 It was here in early 1858 that Alfred Russell Wallace wrote his famous “Ternate Essay” on evolution and natural selection that he then sent to Charles Darwin.

For twenty years, Darwin had developed his theories on evolution but was afraid of publishing them.  The Ternate Essay revealed that Wallace was close to replicating his concepts.  This prompted Darwin to have Wallace’s letter together with one of his own read jointly at a meeting of the Linnaean Society in London in June 1858.  It further spurred Darwin to publish his iconic work, On The Origin of Species, the following year (1859).

Thus, if it had not been for what happened in this home on Ternate, the most influential book of modern times might never have been.

I’m here not only for my penchant to experience history first-hand where it took place, but to plan an exploration of the most extraordinary and interesting places in Indonesia for next March.  Ternate sure is one of them.

The scent of cloves and nutmeg is still everywhere like in Drake’s time, as are the trees that grow them.  The Sultan’s Palace is still here, although rebuilt 100 years ago: 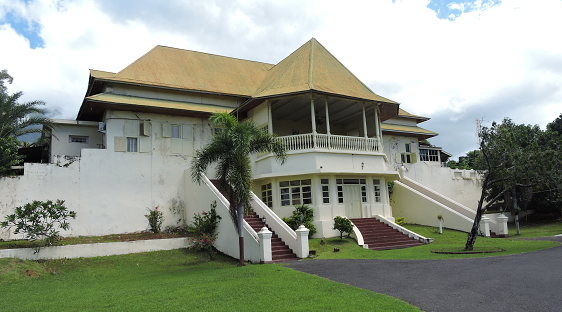 For me, however, what I found most intriguing is not simply the history but the people here today.  Yes, they are Moslem.  Yes, women wear headscarves (but no face-hiding burqas!).  Yes, they observe Ramadan.

But there’s an abundance of Christian churches, Indonesian-made Bintang lager and Guinness beer are popular and available, and most of all, everyone is amazingly friendly.  Everywhere I go, I am greeted with smiles, a cheerful “Hello, Mister!,” an offer to shake hands, and a request that a picture be taken of us together with their cell phone.  Everybody has a call phone. 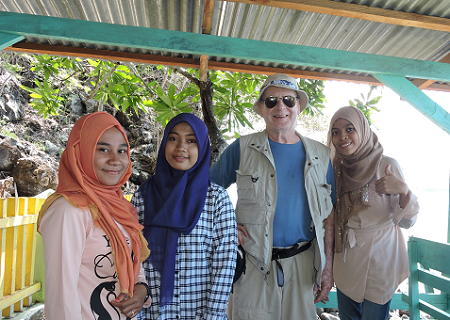 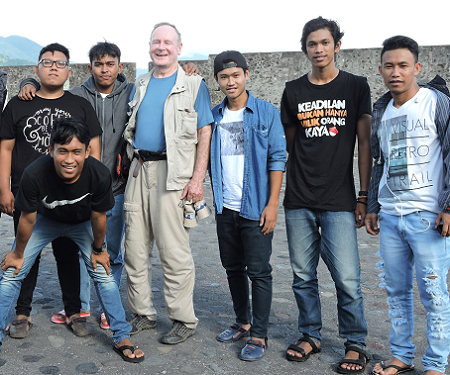 How can you not love a place so unreservedly friendly, and has ice cold Guinness to boot?  Oh, yes, and it’s also really beautiful. 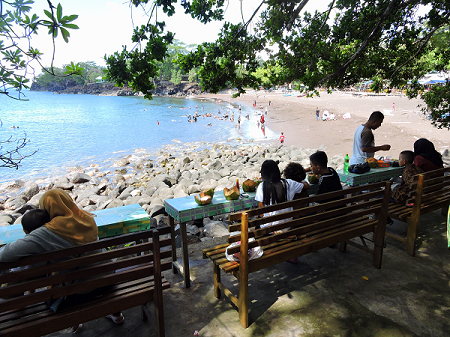 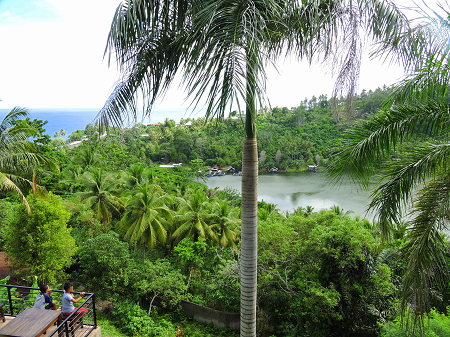 Islam has many flavors.  The one you find here is one we can easily get along with.  Perhaps that’s the final consequence of the meeting between Drake and the Sultan.