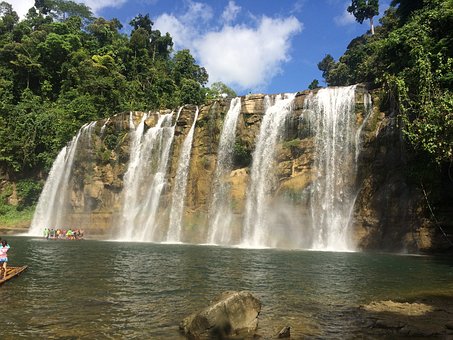 This is the fourth and final installment in Tanja’s “Quest for an Island Paradise” series. Click one of these links to return to a previous article in the series: Buying Sea Shells on the Philippine Sea Shore, Bank Robbers and Hunter Girls in Puerto Galera, and Boracay Unplugged.

Imagine a place where you can stroll along deserted beaches, chase butterflies as big as your hands, drink rum from coconut shells, and encounter rock pools packed with fish, crabs, and starfish with dancing legs. Imagine nature on steroids. Fantasia come to life in a kingdom where dreams really do come true.

I used to think the perfect island paradise was just an ideal, like a phony postcard or mental mirage. I was wrong. The Philippines, otherwise known as “The Pearl of the Orient Seas,” delivers the real thing, outweighing anything you could ever imagine.

With more than 7100 spectacular islands to choose from, the hardest part is deciding where to go, which is why I was surprised that the country has very little international tourism to speak of.

People tend to back away from the Philippines in favor of places like Thailand, for example. This is due to the fear factor in relation to certain dangers like armed robbery, terrorism, kidnappings, and worse.

And yes, with a population of over 80 million, the Philippines are not free of crime (show me a place that is), but you can avoid any dangers by using a little common sense.

What’s more, considering the number of islands available, the overall areas to steer clear of are miniscule. However, due to historical reasons of violence and resistance, it’s probably best to keep away from the following regions:

There you have it. Now that we’ve dealt with the elephant in the room, I can get on with introducing the star of the show…

Siargao Island (pronounced shar-gow) rests 800km southeast of Manila. With a landmass of approximately 437 kilometers, the island is one of many that make up the province of Surigao del Norte. To clarify, the island sits on the Pacific Ocean side of Mindanao at the northeastern tip of the Caraga Region.

In comparison to Boracay, Siargao is almost savage, with an abundance of shallow warm waters protected by reefs and beaches that are untouched and unspoiled by development. Home to the largest mangrove forest in the Philippines, environmentally speaking, the place is a miracle in itself. On the east coast of the island, you’ll find hectares of fish-nursery mangroves where you won’t see another human being for hours, maybe even days.

What’s more, the island is a surfers’ paradise. The most famous surf break, Cloud 9, hosts an international surfing competition each September. There are other breaks still, suitable for all levels of expertise and personal preference. Sexy waves abound at Rock Island and Stimpy’s, Cementiri’s, Jacking Horse and another, more relaxed break in front of Daku Island. For a small fee, a local will take you out by boat for the whole day.

The surfing season is generally between August to March, but these things can be unpredictable. We happened to be there in the off-season but Fabrice still managed to draw some waves while yours truly was busy perfecting the art of doing nothing.

Want more? Sure you do! Okay, so if the surf’s not in the mood to play, go to the jungle and check out the wildlife on the island. You can still find tarsiers (bush-babies), flying lemurs, lizards (including 6 feet long monitor lizards), parrots, kingfishers, and many more. Explore caves, kayak in lagoons, dive, snorkel, fish, and island-hop. Get to know the locals. Buy shampoo. Floss your teeth, go to the market, or check out Dapa, the port town 13 km from General Luna.

In case you’re looking for a different type of escapism, there are a couple of bars scattered around the island. When I say bars, they’re more like open-air bamboo cabins with beach sand on the floor. I forget the name, but there’s a tiny place near Patrick’s On The Beach that offers big vodkas, massive ice cubes, intriguing locals and expats (to say the least), live music, and a DJ after dark.

Public transport works best via motorcycles and private motorbike taxis. In regards to the latter, only the truly adventurous need apply. Who knew you could fit four people on a motorbike? Yes, being a scaredy cat, at first I did freak out about the bike-taxis in the middle of the night, but there’s really not much choice and it all worked out fine in the end.

In the pitch black of night (no streetlights), the local dudes navigate each and every dirt-road pothole by heart. Trust! Besides, isn’t it true that doing something scary and extraordinary stretches you in a way you would never otherwise know? Or so they say.

There are plenty of choices to fit every budget. We stayed at Patrick’s On The Beach. Location wise it was perfect. Andreas, the owner, is a funny old German fellow who’s always happy to chat and tell you about the virtues of paradise living.

He’s got a bunch of huts right on the beach, which seemed to me a lot more user friendly and comfortable than some other places. Prices are reasonable. The rooms are great and the menu at the restaurant is vast, serving generous portions of international dishes and vegetarian food. The breakfasts are divine. (Don’t forget to try the homemade yoghurt, dark German multigrain bread, and mango-infused local rum… yum, yum!)

And guess what? There’s Internet! For me, that was the deal clincher right there. Although there are no banks on the island (the only downside) they let you run a tab, change currency, and pay with your credit card at the end. Otherwise it’s a three-hour boat ride to the city of Surigao where you’ll find ATM machines that accept Visa and Cirrus cards. In a way that’s a major pain, but in another it’s kind of refreshing.

As the article continues, Tanja describes her favorite moments on Philippines’ most beautiful beaches. Plus she provides helpful information about the cost of living and buying vs. renting property. Click here to continue reading “Siargao, Philippines – Paradise Found.”