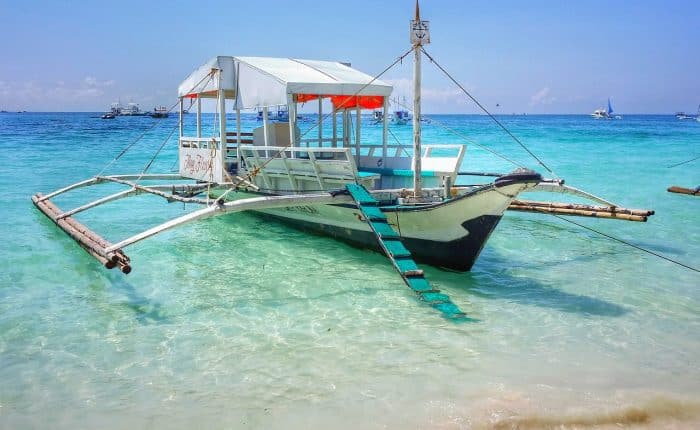 Continued from Part 1 of “Buying Sea Shells on the Philippine Sea Shore,” the first article in a four-part series, “Living on a Philippine Island” by Tanja Bulatovic.

After a couple of days, I started to feel like a walking ATM machine. Everyone wanted a piece of me and I wasn’t equipped to handle it. Not mentally. Not financially. Apart from the output for the shells, I paid Joe and Jays’ wages, paid for their accommodation, food, beer, cigarettes, the cook’s fee, tips, you name it, I paid for it and just when I thought I’d supported everyone on the entire island, they’d hit me with something else – like the ‘car rental fee’ for the shiny new 4-wheel-drive which actually belonged to the family.

Don’t get me wrong; I’m a generous person by nature. Often too generous, but there is a limit and the situation was beginning to wear me down. Not just the fact that I was getting ripped-off – there was something else. Each afternoon, the locals and their gorgeous children continued to bring their ‘show and tell’ shells. They would fetch them in cane baskets, and display them on a big wooden table, which was our makeshift market place. Every so often, I’d play about with a shell in admiration of its beauty, when on one particular day, I’d noticed that a number of shells where heavier than the rest. Why? They where still alive. The whole thing didn’t sit well with me any more. Immediately, I closed up shop for the day and retreated so I could ‘think’.
Thankfully, my guides must have sensed the delicacy of the moment because they left me alone for the rest of the day.

Then, that same afternoon came a welcome distraction. New guests – 3 Filipino women and 2 American dudes arrived at the resort. Fresh blood! Explaining the magnitude of my personal relief in that situation would be an understatement. At any rate, I must have given off a bumper of a ‘desperate for company’ vibe because almost immediately, they asked me to join them for lunch. Bliss!

Throughout the rest of the day, one of the women, Marisol, introduced me to the wonders of coconut oil, indigenous herbs and Tai Chi on the beach. Needless to say, I offloaded on poor Marisol about my current misadventure. She seemed perplexed to say the least and concerned that I was on my own. Throughout the evening she proceeded to educate me about the routine local ‘mechanisms’ often applied to unsuspecting foreigners, confirming once and for all that my instincts where spot on. I’d been fleeced. Majorly. When Marisol and her friends left the next morning, I decided to accompany them back to the mainland.

My 2 guides had milked me dry. I had run out of cash and I needed more. ‘No problem’ they said, ‘there’s an ATM machine on the mainland’; true there was, but for some reason the machines didn’t take my cards. Never mind, I thought. Luckily, I’d packed my bags and brought all my belongings under the pretence that I needed to get back to Manila for a visa extension. My escape was imminent.

It goes without saying that by this stage, the whole experience had left a bitter taste and all I wanted was to get off the island. I simply told my guides that I’d be back in a few days and fortunately they believed me. All was in place but after we boarded the boat to Mauban, there was a slight delay as we watched a mighty carabao (water buffalo) being loaded onto the tiny wooden boat that was already overflowing with people.

The poor, hulking animal was forced to climb from a small floating platform onto the boat (without a ramp). It kept slipping off and cutting its leg in the process whilst roaring in pain. When it finally managed to board, the 2 Americans where so abhorred by the treatment of the animal, they kept shaking their heads in disbelief while repeatedly mentioning the words ‘photos’ and ‘National Geographic’ in the same sentence. Clearly, I felt at ‘one’ with that carabao.

All being said and done, I have to admit that the island itself did not disappoint. If it weren’t for my guided misadventure, and my cowardly vanishing act, I’d go back in a heartbeat. However, I don’t think that’s ever going to happen in this lifetime and because I believe in sharing – shells or no shells – the island is now yours to explore!