The pale Munich sky bleeds droplets of rain down onto my worn black boots. With each nauseous step towards the entrance I feel the rubber of my soles colliding with the damp gravel. This movement creates a sound that quite probably resembles the one that prisoners of war made while walking through the camps on a miserable rainy day like this one. We nervously pass through the tall front gates and are greeted by a mass of empty land surrounded by short grey buildings that shamelessly dare you to make eye contact with them. These are the barracks, or might they be the gas chambers? We do not yet know. Collectively we forget how to speak, surrendering to a unanimous silence for the next hour and a half.

“May the example of those who were exterminated here between 1933 and 1945 because they resisted Nazism help to unite the living for the defense of peace and freedom in respect for their fellow men.”

Last September I was presented with the opportunity to visit Dachau Concentration Camp with a few of my friends, as the conclusion to a drunken Oktoberfest weekend. The reason that this article has taken its time in completing the voyage from my brain to this page is because I have minimal ties to Jewish culture, and so who am I to write about my experiences in this place that I have no direct connection to? I recently learned that my paternal grandfather, who passed away a little while ago, assisted in the clean up of Nazi concentration camps during his time as an American soldier in the second World War; Dachau being one of them. 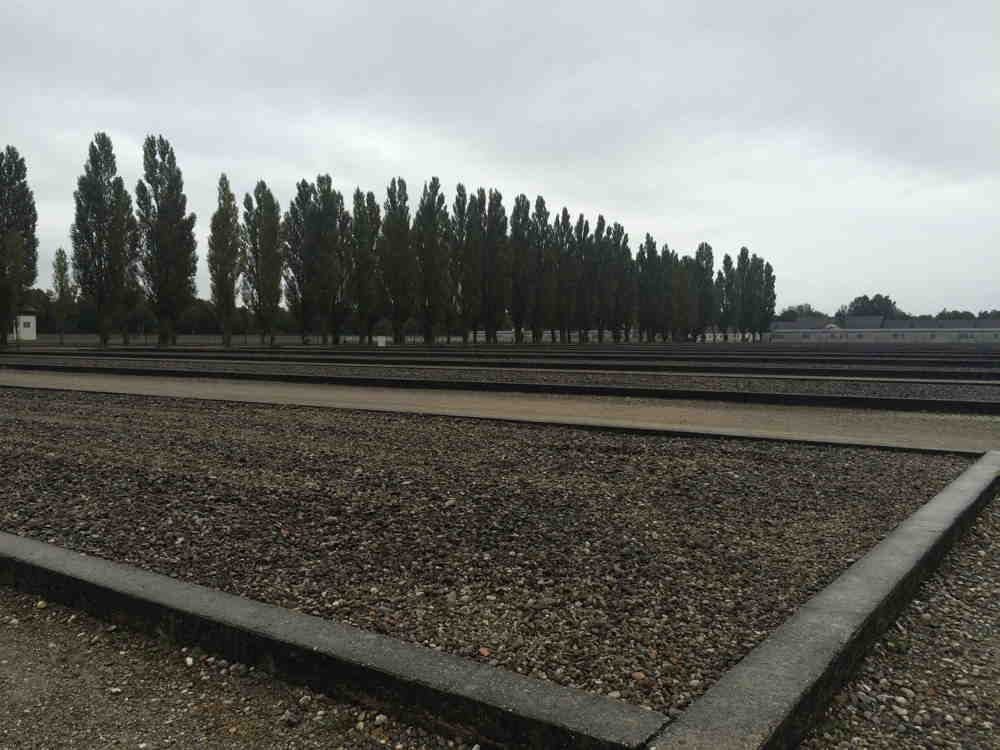 Our visit to the camp prompted me to register for a class in “Literature of the Holocaust,” which has only sparked my interests further. Prior to taking this course, the only exposure I had to the Holocaust was through World War II history classes, which lacked empathy, and movies like Schindler’s List and The Pianist, both of which were brought to my attention by my parents in the comfortable setting of my own home.  This minimal exposure did not ever put me in the position to really look at this massacre too closely. Reading and analyzing the gripping memoirs of Holocaust survivors such as Elie Wiesel and Primo Levi, after having visited a camp, put their accounts into perspective and gave me a specific location to imagine these things happening. It removed the layer that so often times lies between an author and their readers. This is not to say that I can in any way relate to the prisoners who suffered through the horrific events that occurred in camps such as Dachau and Auschwitz. It simply takes the images that these authors present us with to a comprehensible level. In reading their texts, Survival in Auschwitz and Night, I found that I did not have to solely rely on my imagination to interpret the authors’ descriptions because I had real images in my mind in the form of memories.

Dachau was one of the first concentration camps to surface as a result of the Nazi rule over Germany in World War II. Built in 1933, it was the only camp to survive the entirety of the regime, which ended in 1945. It was initially advertised as a “work and re-education camp” for Nazi resisters who were in need of discipline, and in the first few years this was somewhat believable. As Nazi power plagued Europe, the camp expanded and death tolls rapidly increased, many of these murders being classified as suicides so as to protect SS Guards who were killing prisoners. This is the information I learned from the postings in the small museum, and although I could have read all about it online or in a textbook, there is something about being physically present in the place where the events being described actually happened that heightens a person’s reactions towards them. Despite, as I previously stated, having little ties to Jewish culture, the time I spent visiting the camp generated different emotions than when watching a film or reading a book that is based on the Holocaust. The effect is so much stronger when you have something in front of you, in this case, a mass of land that was once a concentration camp, to put it all into perspective. Although the nauseous feeling that I experience while writing this resembles the pit that engulfed my stomach on that day at Dachau, there was much to gain from walking on the same ground as the prisoners of war whose stories are scattered throughout the camp; and so I felt it important to express the effect that it had on me.