How violent is Brazil, really? Well that depends on where you're from

How violent is Brazil, really? Well that depends on where you’re from. 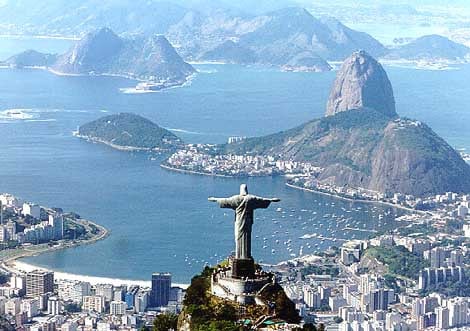 I’ve been living in Brazil for nearly five years and probably the most common reaction I’ve gotten from Brazilians is, “How can you live here, it’s so violent?!”

Brazil is, undoubtedly, the most violent place I’ve ever lived (although I would sincerely argue that my pocket of São Paulo is one of the safest places I’ve ever lived). Having grown up in the Maryland suburbs, I was quite sheltered from violence basically from the moment I was born. Yet despite the statistics and constant nagging from my Brazilian friends and my family back home, the violence honestly doesn’t have much of an effect on me.

Why? Because I’m a foreigner. As a “gringo,” (the term used by Brazilians to denote any foreigner, independent of their skin color) right, wrong, or indifferent, the standard general rules simply don’t apply to me. Of course, I’m not saying I can do whatever I want, but the social constructs that rule over Brazilian society aren’t applicable. Whatever I do is written off as, “He’s just a gringo.” Show up on time for a “churrasco” (Brazilian barbecue)? Gringo. Ask to pay for just your part of the bill instead of dividing it evenly? Gringo. Have an expired license but want to rent a car? Don’t worry gringo, here are the keys.

The same thing applies (or rather, doesn’t apply) in situations of violence, robbery, and even police brutality. One of the most grim, yet poignant, instances of this occurred a year or two before the World Cup when an American woman and her French boyfriend jumped aboard a clandestine van and were kidnapped, raped (her), beaten (him, and probably her as well), and disposed of outside a favela like a bag of trash. The repercussions were swift and immediate. Those local vans that used to circulate throughout the wealthy south zone of Rio, shuttling poorer Brazilians from other parts of the city into iconic places like Copacabana, Ipanema, and Leblon, were immediately prohibited from passing through those neighborhoods. Within a week, the five men involved in the kidnapping were found, arrested, and jailed. The sad part is that at least a half dozen ordinary Brazilian women had either reported being raped by the same men or came forward after having seen the men on the news. It took a foreigner being raped for the police in Rio to care about a gang of rapists.

Last month, a British family in the sleepy beach town of Angra dos Reis accidentally ended up in a slum run by drug lords expelled from the city of Rio due to police operations in the favela communities. They were looking for water and their GPS gave them directions to a slum with water in the name. Since they didn’t speak Portuguese, they unwittingly ignored the requests of the dealers to stop and were subsequently fired upon. The wife was hit in the abdomen and rushed to a local hospital.

Dom Phillips explained what happened next in a piece for The Guardian, “The repercussion was instant. The state governor rang Angra’s mayor, worried about the family’s health. They were put up in a luxury hotel and provided with a driver, a translator, and a security guard. Now 40 new police officers are being hired and social projects planned for poor communities. The gang has left Água Santa, for now.”

The gang freaking left the favela! They left.

And look at the treatment the family got from the state of Rio. Going to great lengths to protect the tourists while ignoring the needs, safety, and security of the general population. Bending over backwards to come up with quick fixes to chronic problems and make everything, superficially at least, look spiffy.

Note that Phillips decided to write “for now” at the end. That’s because when the media firestorm around this case dies down, they’ll likely be back.

These cases are always very bittersweet for me because I see some, albeit temporary, good being done for the Brazilian public at large. But it’s sad that it takes an injured tourist to call attention to such a severe and persistent lack of public safety in these areas.

Brazil seems to be more concerned with protecting its international image than protecting its own citizens. In the days following the Olympics last year, some friends and I were returning to Rio from Petrópolis, the Imperial city where the emperor once lived, when we noticed a police vehicle tailing us on a notorious stretch of the highway next to the international airport, best known for being the funnel of drugs, weapons, and ammunition. With a packed car and out-of-state plates, we fit the bill for possible illicit activities. When the lights went on and we pulled over, the two officers got out of their vehicle and approached ours with their machine guns in hand and a finger next to the trigger. After I gave them my ID and they asked us to step out of the car, they realized we were gringo tourists and you could physically see them relax. They maintained a firm tone when speaking to us but changed their body language by relaxing their shoulders inward and leaning forward when speaking with us. The pat-downs were gentle (I’ve been patted down harder by security getting into clubs) and respectful. I’ve seen suspects being patted down on the street in Brazil and it was nothing like what I experienced. They were very reassuring and careful with their treatment of the gringos; I doubt a normal carload of Brazilians would have been treated so politely.

In the end, the treatment of tourists here is something I’ve benefited from. Again, right, wrong or indifferent, I am protected here. Plain and simple. Can I get robbed on the street? Of course. But that can happen in Paris (the pick pocketing capital of the world) or Pittsburgh (a Spanish exchange student was robbed at gunpoint one block from my house). The difference is that the Spanish girl studying abroad in Pittsburgh was treated just like everybody else (and, she was so distraught over the situation that she left a few weeks later).

But I think it’s about time that Rio (and Brazil at large, but really Rio) takes a long hard look at managing public safety, their city, and state. They need to focus on protecting everyday citizens like they do the tourists and stop putting band aids on figurative (but also literal) bullet holes.

I hope you enjoyed reading: How violent is Brazil, really? Well that depends on where you’re from. If you would like information on moving to Brazil please contact us HERE. Also, I would like to share a few articles about Brazil that I know you’ll love!

7 Ways to Prevent the IRS from Taking Your Passport