People Who Work Anywhere While Traveling the World - Escape Artist 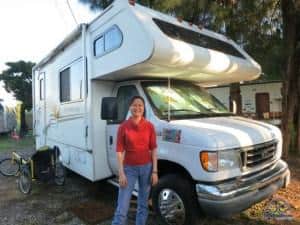 Surprisingly, the majority who are living the nomadic lifestyle, are families with kids between the ages of 5 and 8.

The most common job while working on the road, is writing and blogging, followed by web designing, software development and engineering.

In this article, read about a Photoshop Guru and Photographer who’s been living and working on the road for the last 10 years, and a solo Software Programmer who’s life has taken a complete turn since her journey began.

Since 2006, Ben Willmore, world-renowned Photoshop Guru and Photographer, has lived on the road, in a 40 foot long bus, so that he can work anywhere.

He was motivated to get rid of 98% of his possessions so that he could travel while working, after going on vacation and wanting more of it.

To maintain and grow his business, he owns a website which he uses as a blogging platform, and from which he launched a members-only online group.

“Masters Academy” is Ben’s own private academy to help people master the tools of their digital trade.

Inside Ben’s home-office RV, which he uses so he can work anywhere.

Start an online business using your unique talents to help others while making money at the same time.

What’s needed to make it work

You’d need to create a blog (you can do this in less than a day) to use as a “hub”, from which all your other online activities would flow.

You’d also need to know what digital marketing involves to apply the techniques to your business, a computer and internet connection.

It’s a given that you start an online business before packing up, because it usually takes time to generate an income from the digital world, and you’d want cash in your pocket before heading for the hills.

When she decided she wanted to work anywhere while on the road, Cheng Liu was 38 years old and in a long-term relationship.  The idea of selling up and moving around may have been too radical for her boyfriend, so they decided to part ways so that Cheng could pursue her dream.

Cheng had always worked as a Software Programmer after graduating in the US, and working from Boston for seven years. What motivated her to submit a proposal to her company that she work remotely, was a desire to simplify life.

41% Of working travelers simply transfer their income source like Cheng did. Once the company accepted her proposal, she began researching her options and discovered an entire community of people who were living on the road, so that they could work anywhere. She began looking for mobile homes and decided on an RV.

Cheng in front of her RV.

A year after she quit city life, Cheng has grown as a person, confronting her loneliness, depression and self-doubt. She spent quality time getting to know herself and discovering the things that make her happy. She’s experienced a lot, like volunteering and working on farms in Florida.

At the time of the interview, Cheng had decided to stop working for a company and instead concentrate on doing technical work for nonprofit organizations. She was also going to pursue massage therapy, and her plan was to soon live within a “gift” economy; where people minimize spending money by giving time and skills instead.

Cheng working from her RV.

Work remotely as a Software Developer, either in your own business, or by special permission from the company you already work for.

What’s needed to make it work

Cheng says that if you work remotely as a Software Programmer for a company, you’ll need excellent communication skills, and you need to make sure your boss sees that the same level of productivity is maintained.

If you’re interested in the thought of pursuing a nomadic lifestyle, read these tips on how to work anywhere.

To work anywhere while traveling will not work for everyone. The characteristics needed, like self-discipline, are the same as if you were working from home. You’d still need to work hard, and not be tempted to keep playing when you should be working.

Also to be considered is whether you would feel comfortable with feeling some isolation and a certain amount of uncertainty, depending on your circumstances.

But there is an entire community who have made a living while on the road. Some have pegged down their tents and settled off-road, while some continue to travel and work.

Get more information to work anywhere. How to make a living while traveling is certainly doable!