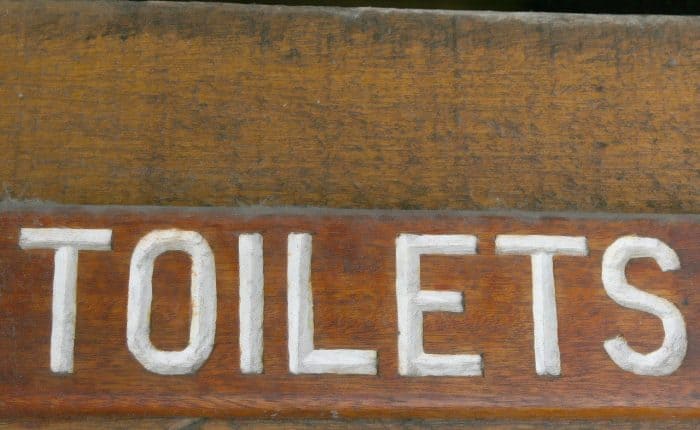 As a foreigner who lived in Korea for a few years I have more than my share of stories to tell. But I think my experiences with Korean restrooms and toilets are easily some of my most memorable. Surprised? Then you have not been to Korea!

Now, I am not a connoisseur of restrooms and toilets. I have used some nice restrooms in my time of course; even ones with an attendant present to hand you a towel. I have used toilets with phones attached, or with that oh-so-nice extra padding in the seat. But as a first-time visitor to Korea, and the orient, I gave no thought to restrooms. Why would I? I just assumed everyone in the world had the same type of facilities. Wrong, wrong, WRONG! And let me tell you, such ignorance of the world does not go unpunished.

My first experience with a Korean style restroom was at a hotel in Daegu, Korea’s third largest city. I walked into the open, door less, entrance marked Men’s room and went to the urinal. I thought it odd there was no door, but didn’t give it a second thought. Once at the urinal, I happened to glance around and notice that I could clearly see out into the lobby of the hotel.

My lightning fast brain quickly surmised that if I could see out, then the people in the lobby could see in – and see me taking care of business. Fresh from America, I must admit I found this uncomfortable. Lesson Number One: Korean restrooms frequently do not have doors and have a clear line of sight to the interior.

Oh, but I had much more to learn. For as I am standing at the urinal, looking into the lobby, in comes a woman from another doorway and walks right past me and enters the stall next to my urinal. Let me tell you, I was shocked. What the hell was going on? I thought. Then, before I had time to react, the woman closes the stall door and, well you can use your imagination. Needless to say, I quickly exited the restroom. Once outside I double-checked the entrance. Did I make a mistake? Did I go into the Women’s room and it just happened to have urinals? What was going on? In fact, there were two entrances, one for Men and one for Women – both led to the same restroom. Lesson Number Two: many older style Korean restrooms are unisex.

A few days later I was walking in a local community park. I came upon a restroom and went in to use the facilities. I went into the Men’s room (checking that is was ONLY the men’s room) and went into a stall.

But there was no toilet in it; just a hole in the floor. I went to the next stall and found the same thing.

Hmmm, I thought. They must be remodeling. Or vandals destroyed the toilets as often happens in America. Too bad.

So I decided to use a toilet at a restaurant near the park exit. Again, I went into the stall and sure enough, there was a hole in the floor. But this time I noticed a pair of footprints painted on the ground, straddling the hole. Hmmm. That was interesting. Again, my lightening fast brain, after a long period of contemplation, arrived at a startling conclusion. The hole was the toilet! Ah crap, I thought. No pun intended. Lesson Number Three: Korean’s use squat toilets. But you know the saying: “When in Rome, do as the Romans”. So I went ahead and used the toilet. Now, Koreans are very accustomed to squatting since many sit this way in the home (where many do without western style furniture and instead use the floor for eating etc.). For me, a Westerner, who had never in his life used anything but a porcelain throne, the squat toilet was quite a challenge.

Without the well-developed leg muscles and sense of balance that comes from years of practice (like the natives), I nearly fell over. The thought of such an accident was sobering. However, I made it. Then I went to reach for the toilet paper and … Lesson Number Four: Koreans usually do not put toilet paper in the stalls.

Some time after this incident I again had to use the toilet, this time in a modern building. I knew the ropes by this time though. Toilet paper was either hanging on the wall inside the restroom or for sale outside the restroom entrance. Nothing could happen to me now, I thought. As I approached the restroom I stopped at the vending machine outside to get toilet paper. I put in my money, and not yet able to read Hangul (the Korean language), picked a stout-looking package from the large selection. I was beaming with confidence. Yes, I was a foreigner, but I had become a seasoned traveler. I was a pro now. Or so I thought. I smugly entered, and used, the toilet. Then I opened my package of toilet paper – only to find a sanitary pad! Lesson Number Five:

I have learned a lot since then. For one thing, I can read Hangul now. And to avoid any possibility of error I carry several packages of toilet paper (each one about the size of a pack of cards) in my daypack. Today in Korea, at least one western style toilet can usually be found in most modern buildings. But you will have to search them out in most places. And in small country towns just forget it. The best places for western style thrones are in western chain stores such as McDonalds, Burger King and TGI Fridays. So when you go to Korea, beware of the restroom. Good luck! .

Excerpted from “Korean Lessons: Restrooms And Toilets” in Escape From America Magazine, Issue 52.

I hope you enjoyed reading: Five Tips for Using Korean Restrooms and Toilets. If you would like information on moving overseas, please contact our office HERE.  I’ve also added a few articles that I’m pretty sure you will love!

Tapping into Your New Global Community

Snorkeling and Exploring the Waters of Belize

Five Questions to Ask Before Moving to Belize