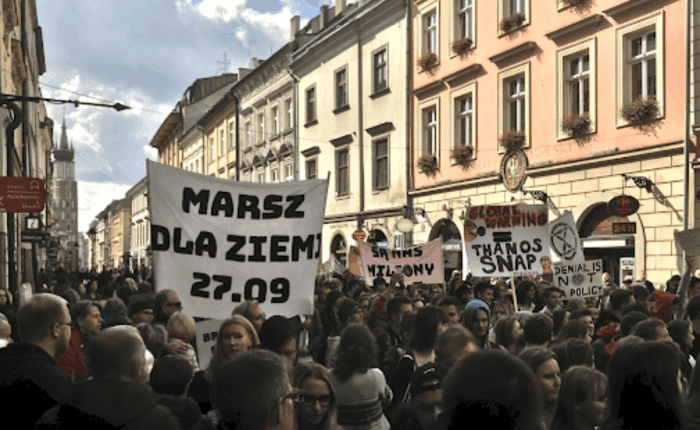 No matter where I live in the world there always seems to be a local election coming soon. And a campaign sign in Poland looks exactly like one in Pittsburg – some smiling face making assurances he’ll “fight” for you.

The United States seems to now have a perpetual voting season, whether it’s mid-terms or the four-year presidential election cycle that involves a full two-year build-up of positioning, pandering, and outright propaganda.

Voters are lied to, emotionally manipulated, and mostly settle for a vote between two pre-selected liars they consider to be “the lesser of two evils.”

Wow. What a way for 21st-century humans to be forced to live.

Here’s a podcast from The Expat Money Show where Mikkel and I talk about safely leaving the rat race by starting an online business!

If you wait for a politician to generate an enormous boost in a specific sector of the economy that will cause your boss to pay you more money, you might have a long wait. You also might get a pink slip instead of that big economic boost that was promised before the election.

The expats I’ve known take a more direct approach. They invest in foreign income properties. They put their money into stock markets that the folks on CNBC rarely discuss.

They start a small business in their adopted new country. They start online side hustles that double their personal income, instead of waiting for that 3% raise they were hoping to get at the office.

There are so many taxes these days that a politician could lower a dozen of them and still make it all back on twenty other taxes we never think about; sales taxes, property taxes, fuel taxes, licenses, permits, registration fees, import duties, special tariffs, fines, levies, tolls, currency inflation, not to mention all the common forms of direct income and payroll taxes.

Expats, however, are not the proverbial low hanging fruit for most of these taxes. In general, people who earn income outside of their native country have far more flexibility in the way they arrange their financial affairs.

A few hours of smart, diligent tax planning can lower the taxes of Joe Expat more than all the politicians he’ll vote for in his entire lifetime.

The incompetence, malfeasance and vote-buying giveaways of politicians have the effect, among other things, of steadily driving up the cost of domestic living. And it does it in ways that disproportionately hurt the little guy.

An average automobile takes more hours of average wages to buy now than it did twenty years ago. Same with houses and most other things. In short, we make more but it buys less.

When you’re an expat you can live like a prince on less money than it costs to just get by back home.

The lower costs of living also mean a better standard of living. When we lived in Belize we could have fresh flowers on our table and fresh-picked fruit every day.

In Thailand, we get one-hour massages two or three times a week. That indulgence alone is basically a millionaire lifestyle in a major US city. In Thailand, it costs Starbucks money.

In Romania you can spend your day in a magnificent castle that leaves you with an experience you’ll never forget, then discuss it over a meal made with no preservatives, hormones, or antibiotics with flavor that makes you feel as though you were cheated all your life back home eating food that came out of a factory.

These are quality of life elements you don’t even realize you’re missing while you’re on a debt-increasing, status-seeking, hamster wheel of conventional life back home.

Some expats know exactly where they want to live. They move to a new location they’ve been dreaming of and they set up a new, improved life and stay there. Others consider mobility the ultimate wealth and enjoy traveling or moving between two or three favorite countries throughout the years.

All of these things amount to true freedom; not allowing an inherently coercive political system to rob you of your money and your choices in life. Freedom means living your own life on your own terms – expats tend to do that. The guy jammed up on the 405 freeway, maybe not. (And I was that guy for 10 years.)

That’s how expats vote. It’s the smartest vote possible because it’s a vote to run your own life instead of empowering self-serving, self-centered politicians to plan and run your life for you.

Expats Vote to Not Get Sucked Into Politics

And if all that isn’t enough, there’s another thing I noticed when I became a full time traveling expat. The people in the expat enclaves around the world generally don’t get sucked into the vortex of politics.

I spent years speaking with new friends in Belize who were from Canada, the US, and the UK. None of us had a clue how each other voted in previous elections back home. It just didn’t come up in conversations.

We told stories of life and loss and fun and tragedies, and all the other things that forge bonds between friends. But none of us wanted to get suckered into the pit of politics because we all knew it led nowhere good.

That’s another form of voting. Choosing not to let the bastards take your life energy and wear you down.

Ready For Plan B?

Are you ready to live life on your own terms – create your own online income? Reach out to us at Safely Leave The Rat Race. We are committed to helping you get from whatever point you are right now – to the point of earning regular, predictable online income.

Pete Sisco has been a successful online entrepreneur and author for over 20 years, building and operating multiple online businesses generating millions in online revenue. This business is how he helps people like our readers do the same.

Enter Any Lottery Online, No Matter Where You Live