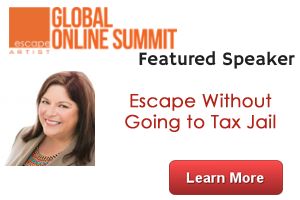 For years, I’ve advised my small business and investor clients on ways to legally reduce their US tax obligations and protect their assets. And, just as important, the tax strategies are set up in a way that allows my client to still sleep at night.

A new client came to my practice with a plan he’d gotten from an offshore tax ‘expert.’ The plan had cost him $25,000. That’s not bad, if the plan actually worked.

His first question to me was how to put it in place. It took awhile to discover that my new client (I’ll call him Dr.. B) didn’t understand the new plan. It sounded good and he’d had a friend (I’ll call him Dr.. A) who swore by this expert. So he just signed where they told him to and forked over the money.

Once we knew Dr. B didn’t understand the plan and that we couldn’t get any response at all from the Las Vegas firm that had set it up, we started digging into the paperwork. There was a lot of it and it took awhile to figure out what the strategy actually was.

It was a classic Offshore Scheme 3.0, illegal and, in his case, not even well planned. A Scheme 3.0 runs off unreported US income to a foreign company. This is an illegal tax scam, right from the start. The problem is that Dr. B was told by the “expert” (and his friend Dr. A) that you could take income from the US and just have it earned in a foreign corporation to avoid US tax. The foreign entity was set up with a foreign trust owner.

Dr. B also had a complicated set of other structures set up in the US by this group. Before, his medical practice had operated in an S Corporation. The ownership was changed over to a LLLP (limited liability limited partnership). Not only did his annual fees for the LLLP jump ten-fold, but it also ended up voiding his corporation. That meant he suddenly had almost double the regular US income tax and an extra thousand dollars per year of filing fees. But it didn’t matter, the “expert” had told him. He wouldn’t have much income there anyway because it was all going to his foreign company.

The problem with the Offshore Scheme 3.0 is that it’s flawed at the beginning. The money that is going untaxed to a foreign company should be taxed at the US level.

Is it possible to set up a foreign company so that a US citizen never pays US tax? Yes, but you have to follow the rules. There are three general rules regarding the type of income, who owns the income and what happens to the income after it’s taxed.

We had to first unwind all of the entities that had been set up. Some of the damage couldn’t be undone and Dr. B ended up paying a lot more in taxes than he should have.

We now have a real plan in place for Dr. B and he is on track to protect his assets and pay less US tax. And he makes the proper reporting of his foreign accounts, so he’s compliant with the new 2014 FATCA (Foreign Account Tax Compliance Act) regulations.

And what about Dr. A, whose recommendation started this whole thing? He got audited and is now facing stiff civil penalties, but hopefully no jail time.

Making Teak a Part of your SDIRA: Guidelines to Financial Prosperity

Tips for Visiting Paris on a Budget

Living in the Dominican Republic: The First Six Months – Part 2