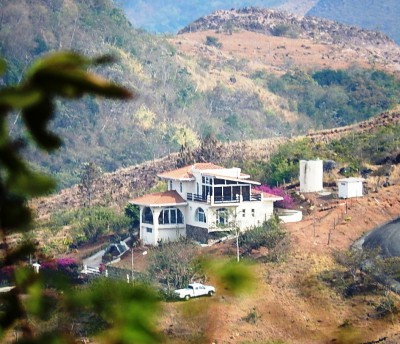 The Americas get a Green Belly Button

When is a green belly button a good thing? When you’re referring to Panama’s little town of Penonome and its 110 new wind turbines, of course!

Measured from the northern edge of Canada down to the coast of Cape Horn in South American, Penonome is located right at the center of the land masses which comprise the continents of the Americas. No wonder the map sellers at Albrook domestic airport started describing it as “The Belly Button of the Americas.”

In September 2012, construction began on the Penonome Wind Farm, the first alternative energy facility of its kind in Panama and the largest in Central America. Spanning 19,000 hectares (46,913 acres), the USD $440 million dollar project will eventually generate 220 MW, up to 7% of Panama’s electrical demand, while reducing the country’s carbon emissions by nearly 450,000 metric tonnes a year.

According to Panama’s president Ricardo Martinelli, Penonome’s wind farm will allow Panamanian residents to obtain “efficient and cheap energy” and reduce their cost of living. UEP (Union Eolica Panamena) director Rafael Perez Pire, whose company is one of the sponsors of the project, says that the wind farm will “…reduce (Panama’s) reliance on fossil fuels and hydroelectric energy.”

Most of the nearly 500 jobs created by the construction have been filled by local labor. The state-of-the-art towers, which rise 90 meters high (295 feet), are being supplied by Xinjiang Goldwind Science & Technology Co., Ltd, the largest manufacturer of wind turbines in China.

Additionally, between 2010 and 2012 the Panamanian government also awarded UEP definitive concessions for several additional wind farms located in Panama’s Cocle Province: La Rosa de los Vientos (102 MW), Nuevo Chagres (169 MW), Maranon (18 MW), and Portobelo (48 MW). These projects are in various stages of development and should be ready for commercial operation by the year 2015.

The future of alternative energy looks bright for the country of Panama!

Cool Language Translation Tools for Your Phone or Mobile Device