What You Need to Know About Zika - Escape Artist

If you’re interested in living, traveling or working internationally – especially in the Caribbean and Latin America – you’ve probably been following the latest on the Zika virus, which is currently active in nearly 50 countries and territories.

The mosquito-borne illness shows no signs of slowing down and is even threatening to majorly impact the Summer Olympics in Rio de Janeiro, Brazil. Professional golfer Rory McIlory is the latest athlete to pull out. It’s also predicted that up to a quarter of people in Puerto Rico will be infected with the virus by the end of the year.

There’s plenty of reliable and updated information available on Zika from the Centers for Disease Control and Prevention (CDC), so be sure to check travel notices about current health issues in specific locations. Everything we know right now about the Zika virus says that 1 in 5 people who get infected will become ill and a total of 4 million people will be infected by the end of 2016. Let’s go over some basics about this tropical infection.

It is a virus that is primarily spread to people through the bite of an infected mosquito. It is similar to other mosquito-transmitted infections such as dengue, yellow fever and West Nile Virus. Zika was first discovered in rhesus monkeys in Uganda in 1947. Humans contracted it within 5 years. Zika did not move into the Western Hemisphere until May 2015, when an outbreak occurred in Brazil.

There is no vaccine for Zika. Most people who become infected never show symptoms or lasting harmful effects. In people who do get sick, symptoms such as fever, rash, joint pain and red eyes are usually mild and resolve quickly.

However, Zika can cause serious birth defects, such as microcephaly, in babies born to women who were infected with the Zika virus during pregnancy. Over the past 8 months, more than 1,500 babies in Brazil were born with microcephaly with another 3,000 possible cases of Zika-linked microcephaly, which causes babies to be born with abnormally small heads because their brains have not developed properly.

There’s also a rare disorder that can cause muscle weakness and paralysis called Guillain-Barré syndrome (GBS) that’s been linked to Zika. Most people fully recover from GBS but some have permanent damage and, in some cases, people have died.

Although primarily transmitted through mosquitos, Zika can also be spread through sexual intercourse. A man can pass Zika to his partner even if he doesn’t have symptoms at the time or if his symptoms have gone away. Blood transfusion is another possible way to contract the virus. 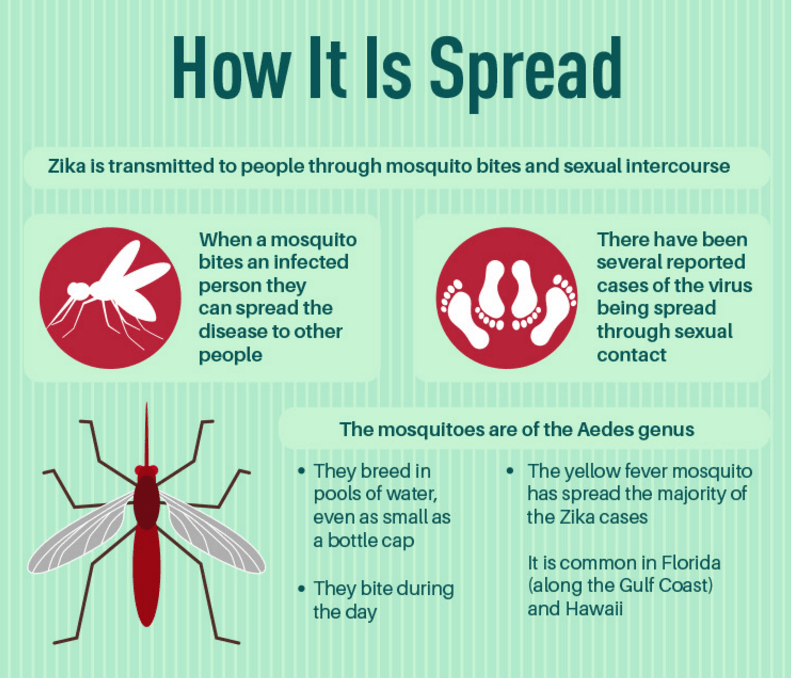 Don’t get bit by a mosquito. Seriously, it’s the best way to avoid getting Zika. Mosquitos that spread Zika usually bite during the day time.

Wear long pants and sleeves to cover exposed skin. Socks and shoes are better than sandals. Female Mormon missionaries are now allowed to wear pants in Zika infested areas. The FDA has declared clothes that feature permethrin, a synthetic insecticide, are safe for women and children.

Stay in places with air conditioning and window and door screens to keep mosquitoes outside. If you are outside and not able to protect yourself from mosquito bites, sleep under a mosquito bed net.

If a pregnant woman or her sexual partner has been in a Zika hotzone, they should see a doctor, even if they don’t feel sick. If a woman is pregnant, condoms should be used correctly every time or don’t have sex. Someone can still spread Zika even if they are not in a sexual relationship. The virus can be spread to a non-carrying mosquito in another location. For more information on this, the CDC recommends taking precautions for three weeks after returning from your trip.

Why There Has Never Been a Better Time to Retire Overseas

Here’s What’s Up With Free Tuition in Germany