There is Surf in Panama! - Escape Artist

There is Surf in Panama! 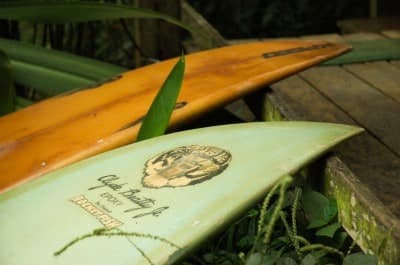 Panama is the only place in the world where you can surf good waves in two oceans on the same day. That is what makes the surf in Panama so unique….

Both the Caribbean and Pacific sides of Panama have year round good weather and it’s not a far drive to the various surf beaches to find the perfect wave. All conditions are optimal for the surfer in Panama – the government supports it, tourism and infrastructure are growing, the beaches are beautiful, and there are world class waves with National and International surf competitions.

Finding your way around Panama is fairly easy with a map or a GPS. Public transportation is available everywhere and is inexpensive. The US dollar is accepted currency. Rental cars are available at the airport in Panama City when you arrive. There are often dirt roads heading down to the beaches, so if you rent a car it might be a good idea to get a 4×4. There are local airlines that can fly you to the Caribbean side of the country, if you don’t have a car. Always carry a copy of your passport and the entry stamp page, but leave the original in a safe at your hotel or hostel. It helps to learn a little Spanish ahead of time, though you can usually find someone who speaks enough English. English is more widely spoken in the Bocas del Toro area. Be sure you bring sunscreen and lots of water to drink so you won’t become dehydrated. Remember that you’re nearer to the equator and the sun.

Local Panamanian surfers follow the same ‘rules of the wave’ as surfers all around the world. Use your common sense surf manners when you hit the waves in Panama. Respect the locals and be friendly while you get to know each other. Leave some waves for others, even if you have a longboard!

If you’ve taken a surf vacation before, you know that most major airlines charge an excess baggage fee for surfboards. Check the website for the Panamanian COPA Airlines because they sometimes have special promotions for surfers. They actually want to attract surfers to Panama! In 2009, the Ministry of Tourism began efforts to promote the sport in Panama. They started by instigating action to close down a trash dump and clean up an area of beach along the coast on Isla Colon in the Bocas del Toro province that is famous for its tubes. This beach is appropriately known as “Dumpers”.

So, where are the best surf spots in Panama and when is the best time to plan a trip there? The Bocas season on the Caribbean side is generally November through April, though there can be some good swells in mid-summer. Try “Inner Dumps”, which can give a continuous barrel for 100 yards! Another good spot on the Caribbean side is “Carenero” which put Bocas del Toro on the map with its world class 4 -12 foot barrels over a reef that drops off into a deep channel. When surf is up here, it can get a bit crowded. The 2014 Panama National Surf circuit kicks off February 22-23 at “Paunch Beach” on Isla Colon, in the Bocas del Toro province. This location is prized for its wave conditions, which are known to reach 2 meters (six feet) or more.

In 2010, the first ISA (International Surfing Assoc.) World Masters Surfing Championship was held at “Santa Catalina Beach”, generally considered the best wave on the Pacific side of Panama, and the Panamanian team placed in the 9th position worldwide. The locals continue to make their mark and place in the international world of surfing as the sport grows in Panama. There are dozens of other sites to choose from on the Pacific side so it depends on your preference. April through June are most popular due to consistent southwest swells and all-day offshore winds. The waves get bigger in late summer.

You can find an interactive map with ranking and other information on over fifty surf spots around Panama at http://www.wannasurf.com/spot/Central_America/Panama/ Updates on the current surf happenings around Panama can be found at SurfosMagazine.com

Debbie Fishell has been a full time resident in the Barú District of Panamá since 2014. She travels extensively throughout the country, researches, and stays up to date with new developments in Panama for her website about the ‘Up & Coming’ town she now calls home www.visitPuertoArmuelles.com  In addition, Debbie is the creator of the first Panama Calendars, depicting the country’s diversity in photos. Debbie can be contacted at Editor@visitPuertoArmuelles.com

In the South Pacific, a New Chapter Begins…in Tahiti

In Their Own Words: Expats Living in Bali – Part 3