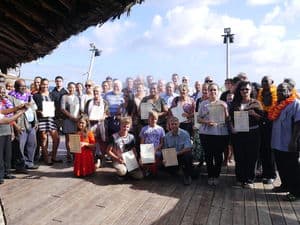 One hundred new citizens of Vanuatu were awarded their citizenship certificates in a ceremony at Au Fare restaurant at Melcoffee in Port Vila Thursday. 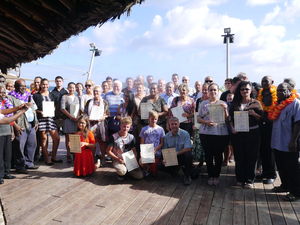 All of them recently received their citizenship after the Government’s Citizenship Commission approved their applications for the citizenship of Vanuatu.

In welcoming the men, women, and children into the ni-Vanuatu (citizen of Vanuatu) family, the First Political Adviser of the Office of the Prime Minister, Richard Kaltongga, said many in the group were familiar faces who had contributed so much toward the development of the country. He thanked them for their participation and looked forward to more of the same in future in their new roles as citizens.

“Citizenship is a special gift to people to become part of the family. And today you are part of the family under the law. Your document gives you the right as a ni-Vanuatu, where the government is sworn to protect,” Kaltongga told those gathered before they were called to receive their citizenship certificates.

“Included in the last group is a South Sea Islander, Gonda Stephen Peter, a fifth or sixth generation originating from a man from Tanna. He emailed me to say he could not come to receive his certificate due to work commitments, but he will be here in December,” Ware added.

Many who received their citizenship certificates comprised of whole families among them some families who have been here for forty years or more, meaning since prior to Independence 35 years ago on July 30, 1980.

A member of the group expressed their gratitude to the Government of Vanuatu and the Citizenship Commission for accepting them “into the family of ni-Vanuatu” and he said they were now ready to play their part fully as citizens of Vanuatu for the progress of the country.

All in the group had earlier taken their Citizenship Oaths before the Commissioner of Oaths of the Port Vila Court House soon after the approvals of their applications for citizenship by the Citizenship Commission.

The chairman of the Commission, Chief Aiden Lawrence and other commission members, and MP for Port Vila Ralph Regenvanu, helped present the certificates.

Panama: A Great Option for Visiting and Retiring