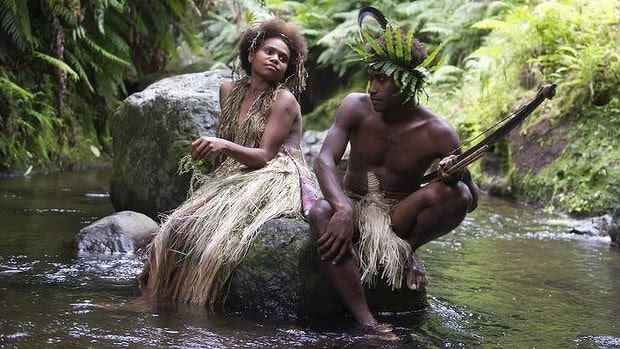 For seven months last year, Australian filmmaker Bentley Dean and his family lived with one of the South Pacific’s last traditional tribes.

With regular fly-in visits from fellow director Martin Butler, they shot a feature film that dramatised the lives of the Yakel tribe in the mountainous areas of a Vanuatu island.

“They still live very traditionally – hunting with bows and arrows and wearing penis sheaths for the men and grass skirts for the women,” says Dean.

“They’ve made a very deliberate decision to conserve their custom as they call it – their culture – because it’s only a half-hour drive down the mountain to the main town.”

The roughly 200 members of the tribe live by the same beliefs as they have had for centuries, with the same ancient ceremonies.

While they have one modern luxury – mobile phones – without electricity they have to travel to town to charge them.

Now, the film that Dean and Butler shot, called Tanna after the island, has been selected to have a world premiere at the Venice Film Festival in September.

The thrilled filmmakers will take at least three of the tribe’s members to the festival – their first trip overseas.

“It’s the best possible start for the film,” says Dean.

He first came across the tribe while shooting a program for SBS’s Dateline more than a decade ago.

“I was just astounded,” he says. “A few hours’ flight from Australia there was every conceivable tropical habitat – from forest to ash plain, volcano, black sand beaches, white sand beaches, coral – and people, just a small fraction of the people on the island, who have decided they are going to keep living in their traditional ways.

“Even back then I thought, gee, this would be a good place to make a film.”

Dean, who made the documentary Contact and series First Footprints with Butler, went to live on the island to work up a story with the community, spending the first two months just talking about their culture.

Given the tribe had never seen a feature film before, the filmmakers showed them the Aboriginal drama Ten Canoes to get a sense of how they could bring one of their own stories to the screen.

They settled on dramatising a controversial romance between a young couple from the same tribe, Wawa and Dain, that took place in the 1980s. First-time actors Marie Wawa and Mungau Dain played the lead roles.

The crew was made up of just Dean on camera, his wife Janita Suter as combined script editor, production manager and make-up artist and Butler on sound, with tribe member Nako as cultural director.

During the shoot, Dean and Souter’s two children, then aged two and five, dressed like the tribe’s children and learned the language.

Dean describes Tanna as an epic film that has an active volcano – the tribe’s “spirit mother” – as a central setting. The cast speak the tribal language Nauvhal .

“People have compared it to Romeo and Juliet. It’s not quite the same plot, of course, but the drama results because of an inter-tribal conflict.”

The filmmakers screened Tanna for the tribe in April, as the  Yakel were starting to rebuild after a devastating cyclone.

“There were a couple of sewn-together queen size sheets strung up in a banyan tree and all the tribes from the surrounding hills gathered in this clearing,” Dean says. “There was a real buzz.

“I really loved the moment where our bad guy makes his appearance and everybody cheered for him. It was more like going to the football than watching a movie.

“Probably the best review that we’ll get came from them the following day when they said ‘we know you came here with your camera and filmed this but we consider this our film’.”

The film’s Australian release is still being discussed.

Islands of Mystery and Legend II