How Does “There” Compare to “Here”?

How does Panama compare to where I live now? That’s a really good question. Asking it now will help determine whether or not you’ll feel comfortable adopting Panama as your new home.

Launched in 2009, Numbeo (http://www.numbeo.com/common/) is an easy-to-use database which compiles and analyzes user-contributed data from cities and countries around the world. Since the data is free from government influence, Numbeo is an outstanding resource for comparative information on costs of living, housing, health care, traffic, crime, and pollution. 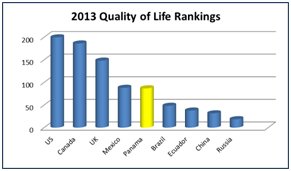 Does quality of life matter to you? In 2013 Panama rated 38th out of 67 countries ranked by Numbeo, which gives pollution and safety the highest weight in their formula.

Purchasing power? Panama ranks 53rd, which might be somewhat lower than expected. (Purchasing power looks at the goods and services that can be purchased for a country’s average wage.) Keep in mind, though, that many foreigners arrive in Panama with a higher-than-Panama-average income which effectively mitigates this ranking for them. The ranking does, however, help give a clearer picture of Panama as a whole. 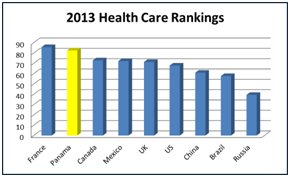 In terms of health care, Panama can hardly be beat. Numbeo’s formulas attempt to estimate the overall quality of each country’s health care system by looking at the number of health care professionals, equipment, staff, doctors, cost, etc. Panama comes in at an impressive 5th place out of 82 countries worldwide.

As of this writing, Malta is rated the safest place to live in terms of crime compared to 127 other countries. (The indices are updated weekly.) Panama’s rate is a relatively low 56th, the United Kingdom is in 61st place, the United States is at 85th, and Mexico comes in at 90th.

Interested in food prices? Numbeo provides average prices by countries and cities for common commodities, and allows you to see those prices in your currency of choice. There are also estimates for daily and monthly grocery expenses. The only caveat to this section is that all quantities are listed in metric units only. 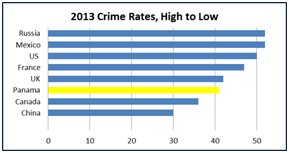 Numbeo also claims to be “the world’s largest database about worldwide housing (real estate) prices and its indicators.” Don’t be confused, though – this is not a real estate site, and land values are not a focus. What Numbeo does attempt to compare are the human costs of housing, including rental comparisons and mortgage rates.

While Numbeo’s feature allowing comparisons between cities is exciting, be aware that in some cases the number of user reports is too low for their data to be meaningful. However, from a country-wide perspective the statistics that are presented are straightforward and clearly defined. This site is a great source for timely information as you consider Panama for your new home!