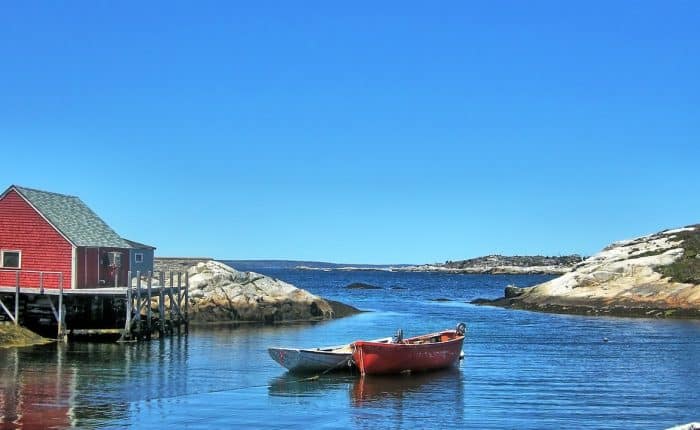 A beautiful and inexpensive place in North America where oceanfront and lakeside lots can be had for the price of a small car (or a charming 3-bedroom home on several acres can be yours for les than the price of a luxury car). Sound like a dream? It’s not.

This slice of Heaven does exist. Nestled in the North Atlantic on Canada’s east coast, Nova Scotia is a little-known paradise steeped in Scottish, Irish and English history. For the potential expatriate or retiree, Nova Scotia has a lot to offer…inexpensive real estate, a low cost of living, unspoiled natural environment, friendly people and lifestyle opportunities to suit virtually every taste.

Coastal property prices are among the lowest in North America and with the local government rolling out the red carpet to newcomers, it has the potential to become North America’s next great retirement haven.

Nova Scotia has long been a favorite escape for savvy Canadians and Europeans, yet few Americans live or retire in this secretive outpost. Why? Well, perhaps it’s because Nova Scotia isn’t a destination you stumble across by accident.

Almost completely surrounded by water, it lies hidden between the Atlantic Ocean, the Bay of Fundy, the Northumberland Strait, and the Gulf of St. Lawrence. Canada’s second-smallest province (21,425 square miles), Nova Scotia is about half the size of Pennsylvania with a population of just under 1 million people.

Its craggy 4,600-mile coastline is dotted with quaint fishing villages, lighthouses and working seaports. Over 3,800 islands lie off its shores (some are for sale); the largest being Cape Breton, which is nearly a quarter size of mainland Nova Scotia. Most of Nova Scotia’s population is concentrated along the coast.

The largest city is the capital, Halifax, in which about 40% of the province’s population lives (much of the interior is heavily forested and sparsely populated). The area’s most famous part-time residents have included Jack Nicholson, Demi Moore, Paul Simon, Billy Joel, Roger Moore, and Alan Arkin, all of whom have had summer homes here.

Nova Scotia is one of those places that can seduce you through its sheer natural beauty.

The seemingly endless stretches of picturesque coastline, a lush green countryside, the beautiful colors of autumn, and the friendliness of its people, make it one of the most livable places in North America. Nova Scotia has a bit of something for everyone: old-world European architecture, everything is close to the water, New England-style charm, great restaurants and leisure opportunities, and slow-paced towns that haven’t changed much since the 19th Century, where fishing and enjoying the outdoors is a way of life.

The climate is another plus. Summer temperatures range from the mid 60s to the low 80s, with the winters being much milder (with less snow) that you’d expect to see north of the border. Like the United States, Canada has a fully democratic system that respects individual rights and freedoms.

Compared with many places in the United States, Nova Scotia enjoys a low crime rate, with incidents of violent being remarkably low. Americans don’t need a visa to spend up to 180 days as a tourist in Canada and non-citizens may buy property without restrictions.

I hope you enjoyed this article: Living the Stress-Free Life in Nova Scotia

Sarajevo – A City to Remember

Here’s how to use the FEIE in your offshore business