Living in Hanoi, Vietnam: It Has Never Been So Easy! - Escape Artist 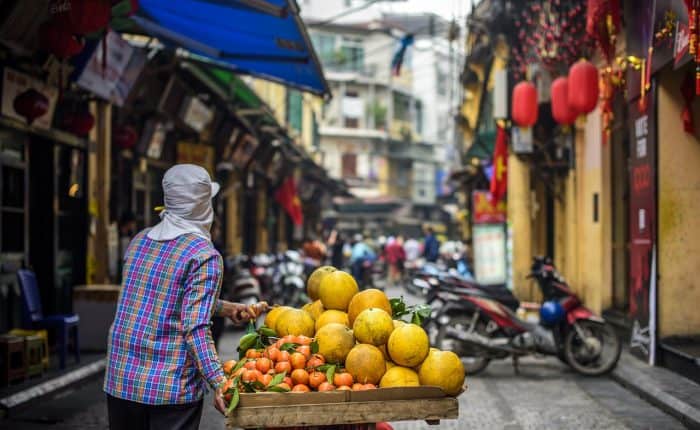 What do most people from the USA think about when they hear the word, Vietnam? Do you think war? News clips from the 1970’s? A time when things really spun out of control?

What most people don’t think of, surprisingly (and by the way its called the American War over here), is the fact that Vietnam is actually a country! A truly beautiful country at that, which, due to the Vietnamese Government’s relatively recent “Open Door” policy , has rarely if ever been easier to live in.

That’s What I’m Doing. Living In The Capital City, Hanoi.

Why? Well, spared the sticky heat of southern Saigon, Hanoi’s three and a half million residents enjoy a city which is liberally sprinkled with lakes, parks, coffee shops, and a surprisingly cosmopolitan range of bars and restaurants. It’s a small city, with all the benefits that brings, and we enjoy four seasons-the variety of autumn leaves and a summer breeze but no one season to the extreme. Summer is not the sweat box that Thailand can be and in winter you won’t be freezing your ears off as you would in Korea.

Even if you’re a sun person like me, it actually makes a pleasant change although I have to admit that in my first year it did catch me a bit off guard. What the***! This is S.E Asia! Aesthetically it’s also very beautiful in parts, with the jewel in this laid back capital’s crown being The Old Quarter.

Centered around the pristine Hoan Kiem Lake (lake of the sacred sword), it’s a labyrinth of narrow streets and alleys, each one dedicated to a particular merchandise, be it salt, bamboo, weighing scales or even funeral coffins! It’s a delight to wander a neighborhood thankfully spared any bombing during the Vietnam war and still retaining a whiff of French colonialism, evident in its shuttered villas and an imposing Catholic cathedral which dwarfs the area’s many smaller shrines and pagodas. And then of course there’s the people.

I’ve found that if you pick up any guide book about any Asian country you’ll invariably read that the people are warm, friendly and helpful….really pisses me off, but much as I hate to say it, it appears to be true for Vietnam, at least in Hanoi. And unlike one might expect there is very little, if any, anti-Americanism, at least no more than anywhere else in the world!

Visas for Vietnam are easy to come by and although of course prices vary according to where you come from, for most it’s about $120 for 6 months. This is a working visa but don’t worry you don’t have to work unless you want to! These visas are extendable for 6 months each time until after, I believe two years, you have to leave the county and come back in again.

A travel agency will get your visa for you (in fact I don’t know if it’s even possible to get one yourself) as it involves a lot of red tape and advise you on any visa matters. The sole travel agency on The Giao street, Nguyen Travel is a reputable agency.

Renting somewhere to live in Hanoi is not difficult. Sure it takes a bit of your time but there are plenty of places out there.

You won’t find anything decent for less than around $300 a month. At the other end of the scale, if you fancy a old refurbished French Villa looking out onto one of Hanoi’s many lakes you’ll find it…and pay for it. So not the cheapest deals in Asia but certainly affordable. Two popular estate agents are E homes, located on the bottom floor of Hanoi Towers and Action Real Estate at 32 Hai Ba Trung.

As to prices of other things, well as you’d expect they’re low. Let’s start with food and drink. A bowl of the local noodles (pho) is around 50 cents in a local shop and other common Vietnamese food is priced accordingly. Particularly appealing is the price of Beer. Bia Hoi and Beer Toi , draft beer brewed locally, go for around 20-40 cents a glass and are more than palatable. It’s certainly a good county for those of you who like a tipple! Imported beer is slightly more expensive, but a bottle of Heineken is still under a dollar in most bars.

Excellent bread (a legacy of the French along with delicious coffee) is less than ten cents a loaf. There is no dearth of foreign food either with French, Italian, Spanish, Indian and American restaurants all popular in the city. You can pick a restaurant to suit your pocket really but I regularly dine at Lay Bac on Hang Bac street where a warm friendly atmosphere, large pizza, fries and drinks for two sets me back around 10 dollars.

Tapas and beer for two at a trendy Spanish place next to the catholic cathedral goes around 30 dollars for two while dining at any of the more traditionally Vietnamese places will obviously be a lot cheaper….. Moving on to other things, a decent DVD player costs around $100 and pirated DVDs themselves a little over a dollar each.

I’ve just set myself up with a computer with all the gizmos and software for around $500. I think that’s enough said on prices have that, if it helps, things are slightly more expensive than Thailand and the Philippines. I can’t tell you the price of that international indicator, the Big Mac as we don’t have a McDonald’s here!

Hanoi has a lot of bars, and the Vietnamese love to drink. Hardly surprising given the prices. Generally speaking, most serious drinking, as in the rest of Asia, is done in restaurants and these are liberally sprinkled round the city, as are the tiny Bia Hoi stalls set up right on the side walk. Most bars, including the popular Polite Bar on Hang Hom where there are a host of other bars / pubs, shut relatively early, around 2:00 am.

An exception is The Labyrinth on Ta Hien in the old quarter which generally stays open until everyone goes home. A great little bar and one of my, and many others’, favorites. For nightclubs there’s Apocalypse Now, on Hoa Ma  which attracts a mix of ex-pats Vietnamese and Tourists, Club M onaco in The Royal hotel or if you fancy going up-market and sporting your latest threads, New Century on Trang Thi.

Getting around the city is pretty easy with motorcycle taxis (Xe Oms) being omnipresent. Cars, although becoming more popular, are relatively rare in Hanoi with most people choosing mopeds or a simple bicycle as their preferred method of travel. The price of, and tax on, cars is prohibitively high for most people whereas you can pick up a second-hand Honda Dream or Wave for $600 or so.

Another popular option among foreigners is the Minsk. A pre world war design bike from Belarus which, while dirty and smelly, is a lot of fun to drive, easy to fix, cheap to maintain and great for taking outside the city. Its really an off-road bike and probably not the best choice for the city but you can’t complain about the price. I picked mine up for $300 and $200 is not a unusual price to pay for this 150 cc machine. You won’t see many Vietnamese driving them though, and I know many think foreigners a little strange for choosing them over something more smart and practical.

Small as the capital is, everyone tires of city life now and again and its great to live somewhere where you have easy access to other beautiful places. Bar Be and Bar Vi national parks are both close, as is Halong bay, a spectacular area of coast line which has been placed on the World Heritage List because of its beautiful limestone outcroppings and accompanying islands.

A little further away is Sapa, a popular honeymooning spot and a great place to base yourself to explore the surrounding mountains. During the winter months, if you really miss the sun, Saigon is less than two hours flight away. I spent Christmas on the small island of Phu Quoc, 40 minutes by plane from Saigon, and a more peaceful beautiful island you couldn’t wish for.

So to round up what is becoming a longer piece than originally envisaged, Hanoi isn’t the perfect place to live. I don’t think anywhere is. But if you’re prepared to sacrifice some of the amenities which come from living in a highly developed, big city and savor the small town atmosphere and traditional beauty that this city has to offer, then Hanoi may well be for you.

Excerpted from “An Introduction to Living in Hanoi: It Has Never Been So Easy!” in Escape From America Magazine, Issue 55.

I hope you enjoyed reading: Living in Hanoi, Vietnam: It Has Never Been So Easy!

For more information on visa requirements in countries around the globe, please visit us HERE

Investing in Teak: A Smart Decision at Any Age

Incorporating Offshore: What Tax Advantages Should You Expect?