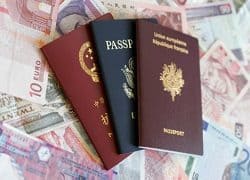 Some 49 million U.S. passports will expire within the next three years. As the USA Today reports, the millions who applied for 10-year passports in the wake of the 9/11 Commission’s 2007 Western Hemisphere Travel Initiative will again collectively backlog the State Department as renewal submissions are all sent in at the same time. The new law began requiring them for travel to and from Canada, Mexico, and the Caribbean, and so produced a surge of applications at that time. The State Department has announced that they expect a similar surge of renewals to back up the process for everyone, leading to increased wait times for applications and renewals.

This comes at a time when there is growing demand for U.S. passports. One reason for the increased demand is the enacting of the REAL ID Act, which makes it so that states who have not complied with new regulations on their state-issued IDs can lead to residents’ IDs being invalid for even domestic air travel. A federal ID solves this problem, and many are already using a passport as primary identification when travelling for this reason.

If you intend to travel at all in the next few years, you should look into renewal very soon. This is especially true if you intend to go somewhere that requires a passport that is valid for a certain length of time beyond when you intend to stay for you to be issued a visa.

But of course, as with many things, there are newly enacted regulations involving your passport. These increased regulations follow a recent trend of similar new rules for passports within the year alone. If it’s not clear yet, now is the time to act if you would like to apply or renew your passport.

The latest additional passport regulation took effect on the first of this month, stating that all new passport photos must be free of any eyeglasses. And if you wear prescription eyeglasses as directed by your doctor, you must now obtain and submit a signed statement from that doctor stating that your eyewear is required for medical reasons. Thankfully, those with eyewear in their current photos will not be forced to get a new photo until they renew their passport.

The U.S. State Department claims the policy change is aimed at making the application process for a passport both more secure and efficient. Some 200,000 photos submitted with applications last year were rejected, with glare from eyeglasses being the top reason for disqualification.

If you’re concerned with privacy, you might not love the physical changes coming to the United States passports. New passports now include technology for additional protection against fraud. The security features include a data chip on e-Passports. An e-Passport refers to a passport book that is embedded with chip technology, issued from any country. Recent updates include a safer data chip that contains biographic and biometric data about you that is used to ensure that you are the actual person entering the U.S., making it harder to duplicate for fraudulent purposes. But the data chip will contain a lot more information about you, as it’s scanned through a computer. This might be a positive in preventing terrorism, as the chip will make fraudulent passports considerably more difficult to obtain.

You can renew a passport online through the State Department, or in person at an eligible local agency like the post office. First-time passport seekers must apply in person.

7 Ways to Protect Your Identity When Traveling Abroad