AquaBounty Technologies, a U.S. biotech company, has created a “Super Salmon” they call AquAdvantage Salmon by inserting genetic material from Chinook salmon and the eel-like species Ocean Pout into salmon eggs. The result is a genetically modified (GM) fish that is entirely female, sterile, and grows at twice the rate of a typical salmon by producing growth hormone year-round. They have been trying to get it into the food supply since 1995.

What does this have to do with Panama? The salmon eggs are produced on Canada’s Prince Edward Island and then 100,000 eggs per year are shipped to Panama where they are grown at a land-based facility in the highlands of Boquete. Panamanian biologists have a long history of successful experience managing aquaculture operations and Panama is currently in support of both aquaculture and genetic modification. The director of the Aquatic Resources Authority of Panama, Giovanni Lauri, has said that he believes this venture could potentially boost investment in Panama by other companies interested in producing genetically manufactured food animals. He also stresses that these companies must comply with environmental and food safety laws. Proponents of genetically modified food products claim that these products are a solution to world hunger and overfishing. On the farm in Boquete, the fish are being raised and then destroyed, because they are not yet approved for human consumption, their 5kg bodies buried in a pit on the banks of the nearby Caldera River.

The hold-up is awaiting final approval from the US Food and Drug Administration to allow human consumption of the GM salmon. The FDA has given preliminary approval however, and in findings released in 2012, suggested that biotech salmon raised under specific conditions would not have a significant impact on the U.S. environment. The agency said that the area’s most likely to be affected are outside the U.S., and the National Environmental Policy Act “does not require an analysis of environmental effects in foreign sovereign countries, [and] effects on the local environments of Canada and Panama have not been considered and evaluated.” Canada giving approval for the production of the GM eggs was also the first time any government has given the go-ahead to commercial scale production involving a GM food animal. According to Ron Stotish, AquaBounty’s chief executive, “This is a significant milestone in our efforts to make AquAdvantage® salmon available for commercial production”. If given final approval, the salmon will be the first GM food animal in the world, opening the door to “at least 35 other species of genetically engineered fish currently under development”, says Friends of the Earth, an advocacy group, and “will set a precedent for other genetically engineered fish and animals…to enter the global food market”. Researchers are also working on GM cows, chickens, and pigs as future food sources. According to Giovanni Lauri, “”From what we know it is very close to being approved. There have been tests for many years and the last thing we heard from the FDA is that there is a very good probability that it is going to be approved in the near future.” The optimism is seconded by Luis Lamastus, AquaBounty’s landlord, who says “These kind of fish are the future.” 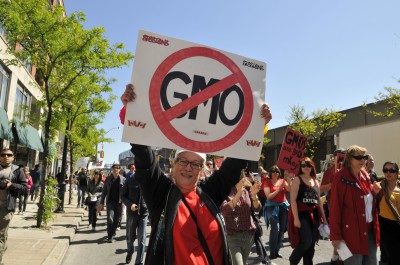 In spite of supporter’s positive outlook toward GM salmon going to market, there is also a great deal of controversy surrounding the project. The US, Canada and Panama are taking heat right now from environmental groups, consumer organizations, and commercial fishermen around the world who fear that there may be potential for the GM salmon to get into the wild where they could interbreed with wild salmon, devastating and possibly wiping out the entire species. There are also an increasing number of people who fear the potential health risks of genetically modified foods in general. Many feel there is lax oversight and regulation around genetic modification due to the excessive influence of the biotech industry in political circles. The FDA received more than 1 million public comments in 2013 asking it not to approve the GMO salmon. It looks like these groups may be having their voices heard through the power of consumer demand. As of March 2014, approximately 9000 stores across the U.S. have said they will not carry the GM salmon if it is approved. Among these are several large grocers including Kroger, Safeway, Target, Whole Foods, and Trader Joes, which may cut deeply into the market potential. No word yet from giants Cosco and Wal-Mart though, so there may still be hope for the product. Biotech seafood startups will be watching them closely.

Seems this investment opportunity is riddled with both high potential and high risks. Is GMO Salmon the solution to feeding the world or is it Frankenfish? AquaBounty has run through more than $60 million waiting for approval and hoping their investment will pay off. The Panama salmon farm in Boquete received a shipment of about 25,000 eggs from their lab in Prince Edward Island in March 2013. When those fish reach maturity, around September of 2014, will they be bound for your local market or a riverside grave?