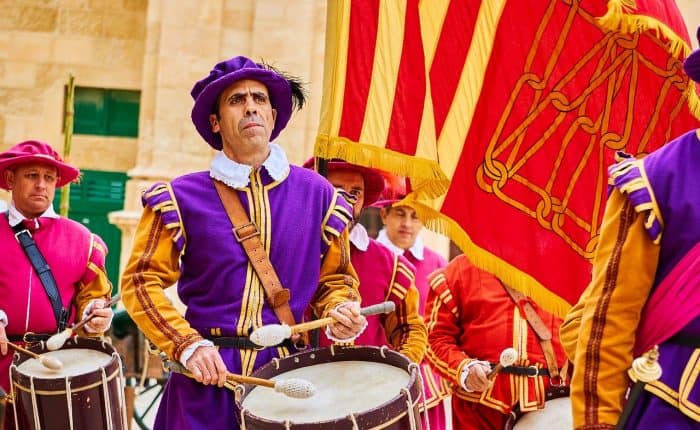 No work on Malta would be complete without mentioning Malta’s spectacular Carnival. Held at the beginning of Lent each year, it brings the capitol and surrounding districts literally to a standstill. Everyone adorns costumes and join in the festivities, which climax each day with a giant parade of colorful floats that in many cases have taken a year to construct.

On the local level every parish church has its own celebrations, which last several days and conclude with a giant fireworks display.

The long Maltese summers herald fiesta time. No visit to the Islands between May and September would be complete without seeing a village fiesta in full swing. It’s a chance to catch a slice of Island life close up and be part of a tradition that stretches back to the 16th century.

Two words define a Maltese village fiesta: saints and fireworks. The weeklong festivities celebrate the parish patron saint. The celebrations themselves end in the grand finale of a firework display. Along the way, there is plenty of brass band music, peeling of bells and street life.

Fiestas may seem chaotic exuberance at times, but a lot of careful planning goes into organizing the week. And the event is still very much a spiritual affair. You won’t need to plan though to see one while you’re here. In summer, there are at least a couple of fiestas every weekend. Hotels and local tour operators often organize evening excursions to the main village fiestas. Want to know more?

There is something unusually captivating about a typical Maltese village fiesta. It is a time for both spiritual contemplation and for the whole parish to come together. The fiesta is the main social event in the village year. Fiesta week is the outcome of months of hard work by willing volunteers and villagers feel a strong, close-knit camaraderie after so many months of preparation.

Under sultry, summer skies, families meet in the central village square to chat, joke and catch up on local news. Children have an excuse to stay out late and eat traditional fiesta snacks, which include rich, colorful nougat.

The church is illuminated with thousands of bulbs and festooned with decorations inside and out. Parishioners do the same to their own houses, often inviting family and friends over for a celebratory drink and to admire their handiwork.

The church bells that ring all week are more than just a call to mass. They mark five days of spiritual preparation during which whole families flock to church. Celebrations begin with three days of prayer leading up to the feast day. Churches hold vespers and mass with special hymns dedicated to the patron saint.

On the eve of the feast, vespers and mass are at around 6pm. Then, the village band clubs hold their concerts. Later on, around 10pm, is the fireworks display, known as the ‘giggifogu’ a corruption of the Italian ‘giochi di fuoco’, meaning literally ‘fire games’. The Maltese Islands are well known for their splendid fireworks.

On the feast day itself, Solemn High Mass is early in the morning at around 9.00. The priest will give a eulogy on the patron saint and call on his parishioners to lead more exemplary lives. The day is then relatively quiet until the evening when vespers are held again. The statue of the patron saint is carried shoulder high to the accompaniment of brass bands and showered with confetti as it wends its way through the streets.

Throughout the week, there is a sense of spontaneity and merrymaking. Villages and town parish squares buzz with people well into the early hours. After such a build up, no one wants to see fiesta week end.

VIDEO: How to Drink From a Coconut