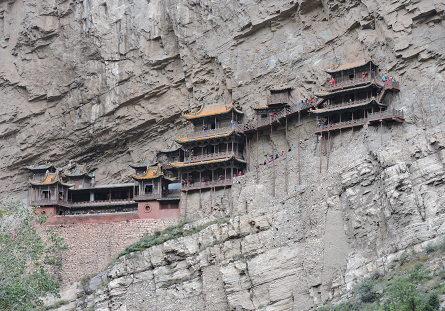 This is the Hanging Monastery in Datong, China.  Built on a cliff face on the edge of Inner Mongolia, it’s over 1,500 years old.

I’ve just spent the last three weeks going to remote regions in China, where there are constant reminders of just how ancient of a land this is.  So many centuries of history gives the Chinese long memories.  Here’s a historical memory every schoolkid in China knows:

Notice any difference between these two maps? 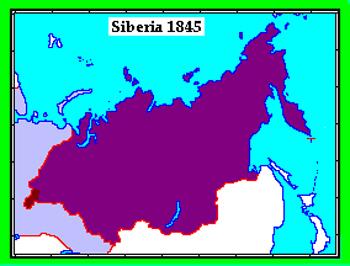 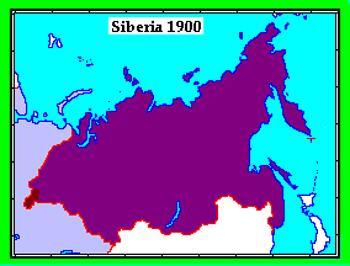 As you can see, Russia gobbled up a huge chunk of northern China, wrapping all the way around it to Korea, such that northern China remains landlocked with no access to the Sea of Japan to this day: 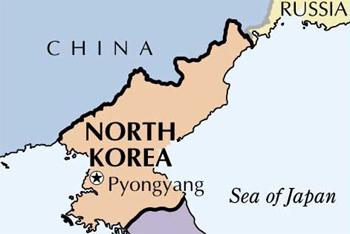 How did China lose all this territory, which it once called its Maritime Provinces?  It was thanks to a sociopathic lunatic named Hong Xiuquang (1814-1864).

In 1843, Hong read a Bible tract by a Chinese Christian missionary, and he decided that he was the younger brother of Jesus Christ. And as the New Messiah, God instructed him to rid China of its Manchurian rulers of the Ching (Qing) Dynasty.

His movement, Taiping Tianguo (Heavenly Kingdom of Peace), gained millions of followers and precipitated the deadliest civil war in human history.  Between 1851 and 1864, the Taiping Rebellion cost China 50 million lives.

It was finally defeated by an English officer leading the Ching Imperial Army.  His victory forever earned him the sobriquet Charles “Chinese” Gordon.  Hong poisoned himself.

During the Taiping chaos, China was unable to defend her borders and Russia’s Czar Alexander II (1818-1881) saw his chance to achieve his country’s dream of warm-water ports on the Pacific Ocean.

He assigned the task to his Governor of Eastern Siberia, Nikolay Muravyov (1809-1881), and Russian General Gennady Nevelskoy (1813-1876), who proceeded to move some 20,000 Baikal and Amur Cossacks east of the Amur-Ussuri Rivers and onto Sakhalin Island.

By 1858, Russian control of the region was a fait accompli.  On May 28th at the Siberian town of Aigun, the representative of the Chinese Emperor was forced to sign the Treaty of Aigun which ceded China’s Maritime Provinces to Russia.  For this, Muravyov was granted the title Count Amursky (“of the Amur”) by the Czar.

This history puts into perspective a news story in mid-October (10/16) by Russia’s only independent television station, Ren TV, reporting from Vladivostok:

The emerging demographic situation developing here between Russia and China is simply catastrophic. The crisis is due to the creeping expansion of thousands of Chinese migrants. Chinese workers entering Siberia are replacing Russians who are not prepared to toil 12 hours a day for a pittance.

Chinese students are taught that Siberia is their land, stolen from China in the 19th century.  It is suspected by many Russians here that China is subsidizing the migration of its citizens.  Demographers predict that by 2025, Chinese will be the Russian Far East’s predominant ethnic group.  Then, it is feared, they will gain the right to vote and demand union with China.

If you’re familiar with the Reconquista plan of the Mexican Aztlan movement (to reconquer the Southwest U.S. “stolen” by America in the 19th century), this may sound like déjà vu all over again.  Yet, however bad you think our illegal immigrant problem is, it’s pipsqueak compared to Russia’s in Siberia.

Eastern Siberia, or the Russian Far East (the right half of “Siberia 1900” above), is 6.2 million square kilometers (2.4 million square miles), almost 65% the size of the entire United States including Alaska (9.6msk, 3.6msm).  The total population is 6.7 million, or a little over one person per square kilometer.

One province of Eastern Siberia is Yakutia (also called Sakha), half the entire area at over 3 million square kilometers, the size of Western Europe – with a population of less than a million.  And less than half of them are ethnic Russia (the others are tribal ethnicities).

Think about that – little more than 200,000 Russians occupying territory the size of Germany, France, Italy, Spain, and Scandinavia that has a superabundance of water, trees, and natural resources.

In northeast China or Manchuria (not China as a whole, but right across the border from the Russian Eastern Siberia), there are over 110 million people, living in land that’s mostly parched dry with little water and few trees.

And what is more “catastrophic” than these demographics are those of Russia’s as a whole:  Russia’s population is falling off a cliff.  In 1991, at the collapse of the Soviet Union, there were 165 million Russians.  Now there are 140 million, a smaller population than Pakistan’s.  By 2025, it will be below 120 million.

The life expectancy of the average Russian man is now 57, due to epidemic alcoholism (millions of Russian men drink a gallon of vodka a week), AIDS, and a fourth-world health/medical system.  Millions of Russian women are sterile because they’ve had so many abortions (the preferred Russian method of birth control).

In the Russian Far East, Russian women who still can have babies are marrying Chinese immigrant men – because they make so much better husbands.  They are not drunk all the time, they’re not beat-you-up abusive, they work hard, and they turn their paycheck over to their wives.  This is a Russian woman’s marital paradise.

Russia’s military is as bad off as its healthcare system.  Its draftee troops are mercilessly mistreated and have no morale.  Its equipment old and rusted, its technology obsolete…it couldn’t take on Poland much less China.  Its nukes are useless, as the Chinese have lots as well and would be the last men standing in an exchange.

Russia’s GDP is smaller than South Korea’s (1.2 trillion vs. 1.4 trillion – the U.S. is 18.5 trillion).  And it will get smaller as its main export, oil, becomes less competitive given high extraction costs.

The geopolitical bottom line is that there is no way Russia is going to be able to hold on to Siberia for much longer.  Within 20 years or less, it’s going to be Chinese Siberia.

It won’t take a war.  The demographics will become so overwhelming that Moscow will just give up and sell the place.  Maybe not all at once.  Maybe in bites.

First it will be Primorski Krai, that region east of the Ussuri River that wraps around Manchuria ending at Vladivostok and North Korea.

The order could rapidly change.  The Chinese government has already leased large tracts of arable land (hundreds of thousands of hectares) in Transbaikalia, primarily Buryatia and Zabaykalsky Krai bordering China and Mongolia.  The area now teems with Chinese migrants producing a lot of food for China.

Control of this area means effective control of the Trans-Siberia Railway, the main transportation link connecting Siberia with Russia proper.

Chinese have long memories and patiently plan long range.  By 2047, the 100th anniversary of the founding of Communist rule in China in 1947, much if not all of Eastern Siberia will no longer be Russian.  It will be Chinese.

How to Travel with Kids in Costa Rica

What’s in a Name? Smartest Investment For Generational Wealth