The Best Cities to Buy Property in 2018 - Escape Artist 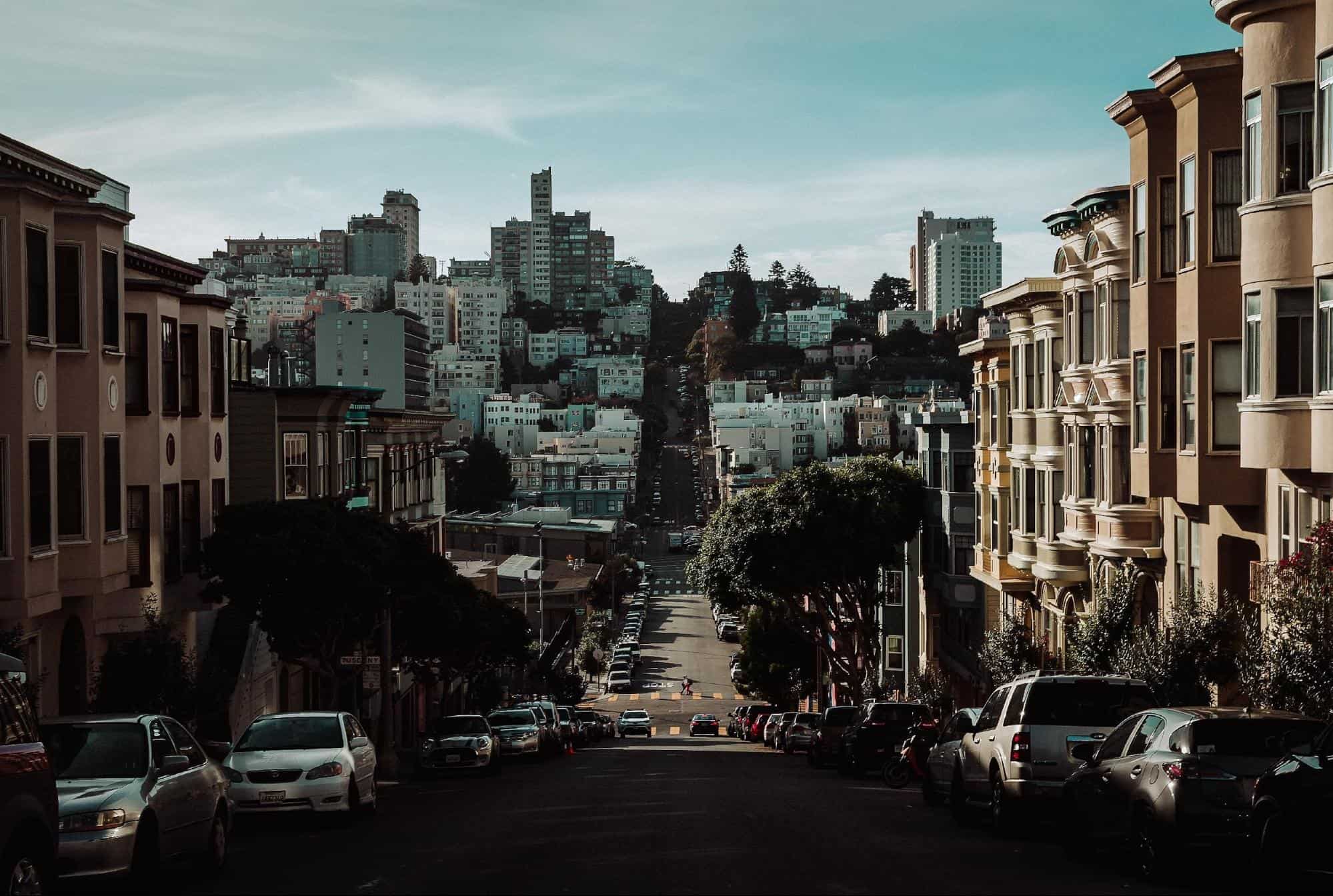 Most international property investors choose from two strategies: buy real estate at a low price to sell in 1 to 2 years, or invest in a steadily growing market and receive rental income for 5 to 15 years.

The strategy one chooses determines the market they enter. International property broker Tranio analysed price dynamics in 40 cities around the world to find out the best places to buy property in 2018.

Resale On a Short Time Horizon

When investing in property for resale purposes, there is a simple rule – buy as cheaply as possible and sell at a higher price. Markets that are in the recovery phase are perfect for this strategy as they have already hit the bottom and are beginning to grow.

For example, Athens is one of the last European markets where property prices have not grown since the 2008 crisis. According to the Bank of Greece, between 2008 and Q3 2017, property prices fell by 44%. However, the country’s economy is gradually recovering and the increasing number of tourists is very likely going to lead to an increase in prices for real estate in Greece in the next few years. According to Trading Economics forecasts, property prices across the country will grow by 24% between 2017 and 2020. 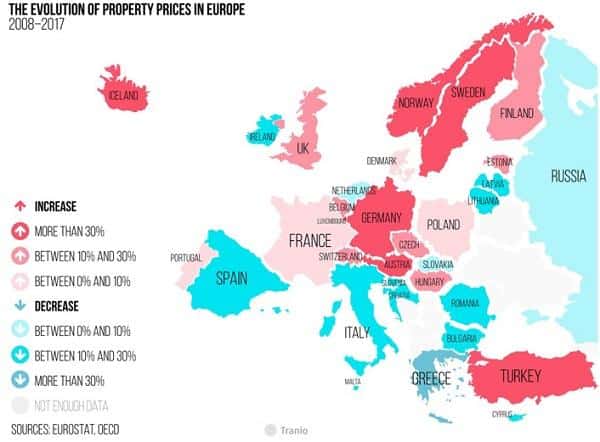 Property in Spain, especially cities like Valencia, where, according to Idealista, residential property prices are 40% lower than its peak in 2007, have great potential for growth. The recent referendum in Catalonia has affected investor activity in Valencia. According to Maria Kamysheva, Tranio project manager for property in Spain, investors who were previously interested in property in Barcelona have turned to Valencia. Property in Barcelona is on average 2.5 times more expensive than Valencia, and prices are currently close to pre-crisis levels.

Madrid, where residential property is 13% cheaper than in 2008, is also promising in terms of investment. According to analysts, including the Association of Real Estate Developers of Madrid (Asprima) and Spanish commercial bank Bankinter, property price growth in Spain will range between 4% and 8% in 2018. Analysts from business school Instituto de Práctica Empresarial believe Madrid will lead this growth, with prices expected to grow by 10.8%. 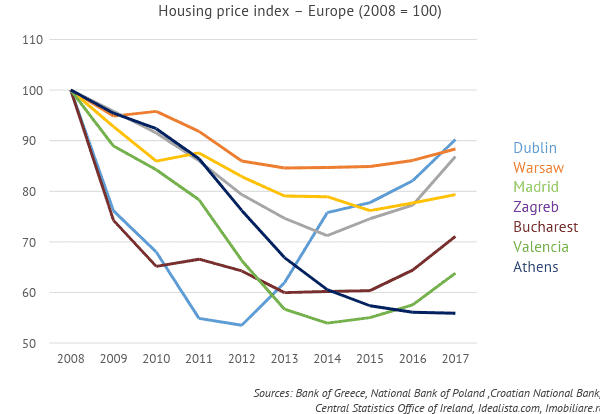 Property prices in Lisbon and New York, two cities popular among investors, have almost approached pre-crisis levels (the difference with 2008 is 1.5% and 3.5% respectively). As such, the potential for growth there is not as significant as in 2012–2013.

Kiev has the cheapest property compared 2008. According to Domik.ua, dollar-denominated prices fell by almost 60% in the past decade. Although residential property prices in foreign currency rose by 15% for the first time in four years in 2017, the market is still considered too risky for investment.

To maintain one’s capital and see it appreciate on a long-term horizon, choosing cities with steadily rising property prices over a long period of time is recommended.

Property in Istanbul has appreciated most significantly: between 2009 and 2017 average prices tripled. Neither political instability nor the threat of terror has affected the largest Turkish market. Prices are expected to continue rising in the coming years, thanks to strong domestic demand, the return of Russian buyers, the weaker lira and the country’s new citizenship-for-investment programme, which applies to property purchases of at least $1 million. 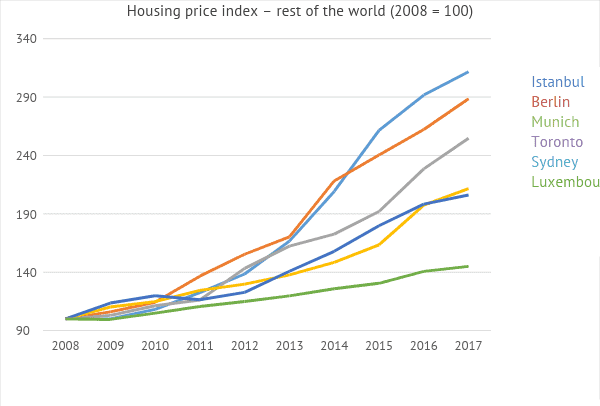 The German market is traditionally very stable, and as such is used by investors for capital maintenance. Prices for property in Berlin and Munich have been growing steadily for the past decade, growing 2.5 times during this time. Certain analysts believe that these markets are poised for a crash. However, according to Fitch Ratings, German property prices will continue growing (by 5% in 2018). As residential property has become quite expensive in these markets (according to Wohnungsboerse.net, the average price per square metre in Munich exceeds €7,000), investors are increasingly choosing to invest in property in smaller Bavarian cities such as Ingolstadt, Landshut, Regensburg, and Fürth, where prices are 1.5–2 times cheaper.

Luxembourg has exhibited a less rapid but equally steady price growth. According to Eurostat, from 2008 to 2017, property prices grew by an average of 5% per annum there.

Reliable non-European locations include Toronto and Sydney. Prices have more than doubled over the past decade in these cities. Fitch Ratings expects Canadian real estate to grow by 5%, and Australian property to grow by 2% in 2018.

London, which has always been considered a safe haven for property investments, demonstrated a 1.6% decline in 2017, according to Nationwide Building Society. Fitch Ratings does not expect prices in the UK to grow in 2018 and expects a slight fall in prices across London and South East England as a result of financial companies relocating their offices outside the UK after Brexit.

Location is the most important factor that property investors must take into account. Tranio does not recommend putting capital in one market, even the most reliable one. It’s better to diversify your investments, putting the most part of the funds into a stable location to maintain capital, and putting the rest in a speculative market that will guarantee higher return on investment.

Tranio.com is an international real estate platform with a network of 700 partners worldwide and a catalogue of more than 90,000 listings in 53 countries. The company publishes daily news, high-quality analysis on foreign realty, expert advice, and notes on laws and procedures related to buying and leasing properties abroad so that readers can make their property decisions with confidence.

Get Rich by Traveling the World – The Digital Nomads