Allahabad is situated at the confluence of holy rivers Ganga, Yamuna and Saraswati, and is one of the sacred pilgrimage centres of the Hindus. It is not only known for the confluence of the holy rivers but also that of religion, history and culture. Mentions of Allahabad in ancient texts make it one of the oldest cities in the world. It is also mentioned in the holy religious scriptures of Hindus, the Vedas and the Purans as “Prayag” or ‘Tirth Raj’ (the king of pilgrimage centres). The city attracts tourists from all over the world, especially during the Kumbh Mela, a grand religious fair held every 12 years that is attended by millions of devotees from all over the world. The previous Kumbh Mela was held in 2013.

Allahabad is well connected by roadways and railways. If you are taking a flight, the nearest international airport is in Varanasi, another pilgrimage centre which is 120 km from Allahabad. From there, you may hire a cab or catch a train—either will take you to Allahabad in about three hours. Allahabad is well-connected by rail with all major parts of the country, so the train would probably be a better option for reaching Allahabad. A train from New Delhi to Allahabad takes up to 8 hours. For travelling within the city, you would be better off in hiring a car.

Once you reach Allahabad, there are many options available for accommodation ranging from the budget lodging to 5-star hotels. Staying in and around the Civil Lines area will be a bit expensive. If you are a budget-conscious backpacker, move out of Civil Lines and look for accommodation elsewhere in the city. Food is relatively cheap in Allahabad and you have a variety of places to choose from. Restaurants in the Civil Lines are the most expensive places to eat out.

Let’s now have a look at some of the places of historical and cultural importance in Allahabad: 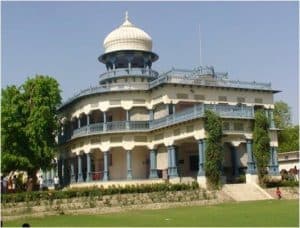 Anand Bhawan – It was built by the first Prime Minister of India, Pt. Jawahar Lal Nehru and served as the headquarters of the Congress Party during the freedom struggle. The father of the nation, Mahatma Gandhi, also frequented the place. The Grand Nehru house now serves as a museum.

Company Garden – Formerly Alfred Park, it boasts the grand, Victorian Age building which now serves as a public library. The park is known for being the place where Chandra Shekhar Azad laid down his life, fighting with the Britishers. A statue is built at the same spot in his memory.

Allahabad Fort – Located on the banks of the river Yamuna, this grand and strategically positioned fort was built by the Mughal emperor Akbar.

Minto Park – Minto Park is the site of the Queen’s Proclamation, which marked the transfer of power from the British East India Company to the British Crown. This transfer took place in 1858, after the First War of Independence in the country the year before. The park also has a replica of the famous Ashokan Pillar.

Culture and Customs in the Kingdom of Tonga