The Route to Annapurna - Escape Artist

The Route to Annapurna

For the past two weeks, in our exploration of the greatest mountains of the Himalayas, we’ve learned the route to Everest, Lhotse, and Cho Oyu and that to Makalu and Kanchenjunga. This week, we explore Manaslu and Annapurna. 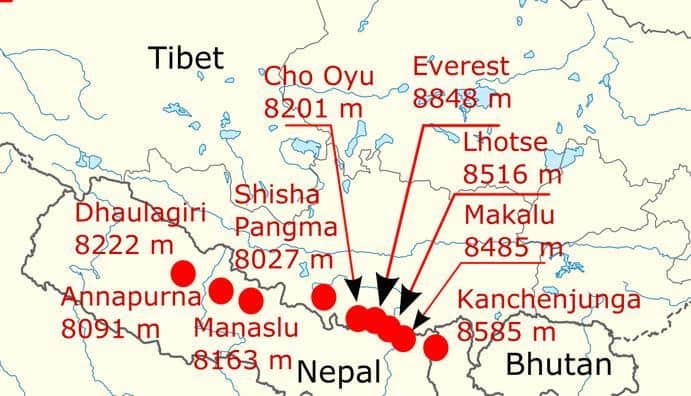 We first note that the five “eight-thousanders” (over 8,000 meters high) we’ve been to so far are on Nepal’s borders, while Manaslu and Annapurna (along with Dhaulagiri – we’ll get there next week) are entirely within Nepal. (Shisha Pangma is in Chinese Tibet.) So we get to go completely around them.

We ended our experience with Kanchenjunga by returning to our home base in Kathmandu, the famed Yak & Yeti hotel. We’re up at dawn the next morning to board our ultra-high-altitude AS 350 B3 Eurocopters and head north for Manaslu. Here’s the trekking route around the world’s eighth highest mountain at 8,163 meters/26,781 feet: 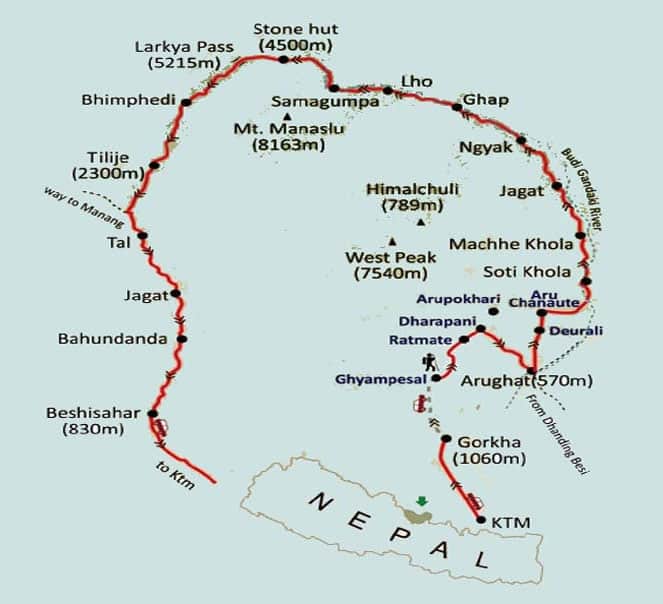 There’s no need to follow it, as we head straight for the mountain. It’s not long before we see a gigantic peak looming before us. We think that’s gotta be Manaslu, it’s so big, but no – it’s Himalchuli, the world’s 18th highest (7,893m/25,895ft) with its towering South Face rising 10,000 feet straight into the sky. We rotor right by it.

As soon as we do, suddenly, there it is – the Mountain of the Spirit in Sanskrit, Manaslu.

We fly straight up the sheer East Face, seeing the summit clearly…

Over its upper glaciers and down to the Manaslu base camp at the Sama Gompa Tibetan village.

The people here are Tibetan, and they are only too happy to see us.

After our visit over yak butter tea, we lift off for the Annapurna Range. Let’s orient ourselves. 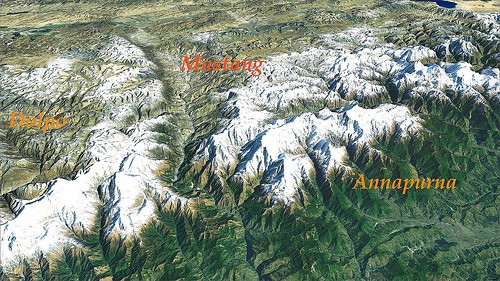 Nepal’s town of Pokhara is in the bottom right corner of this sat photo, the Tibetan Plateau runs along the top. The region of Mustang lies at the head of the Kali Gandaki valley, cutting through the Himalayas between Annapurna on the right and Dhaulagiri on the left. To the west of Mustang lies the uber-remote region of Dolpo (we’ll get to those regions next week).

Next to Everest Base Camp, the most famous treks in the Himalayas are to Annapurna – the Annapurna Circuit around the north side of the Annapurna Range, and to the Annapurna Sanctuary from the south. The only way in is through the Modi Khola Gorge, the gash running directly into the sanctuary and the Annapurna Base Camp (to the left of the “A” in Annapurna above). 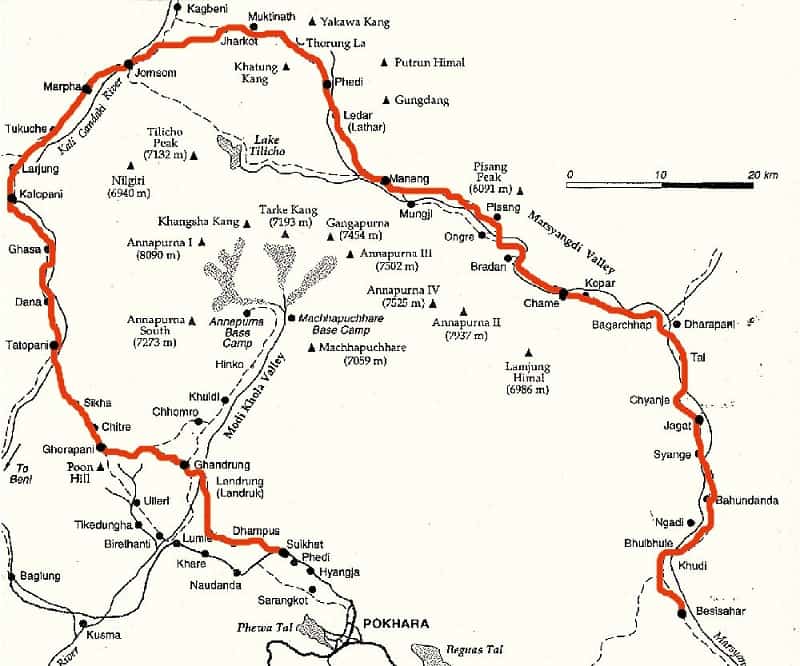 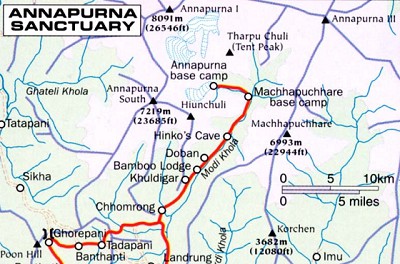 Referring to our Manaslu trek map above, we lift off from Sama Gompa to fly over the 17,000-ft Larkya Pass and down the Bimthang Gorge (the big black shadow above the “ap” in Annapurna in the sat photo), and turn right where the Manaslu map says “way to Manang,” joining the Circuit.

The Larkya Glacier is impressive, especially with the west side of Manaslu on our left.

And as we come over Larkya, it’s a thrill to see the whole north side of the Annapurna Range.

And we get a look at the vertical northeast face of Machhapuchhare (much-ah-poo-cha-ree), the famous Fishtail – it’s an angle you can’t see except from a high-altitude helicopter.

Refueling in Manang (see Circuit map), we deviate from the circuit for a sight that is truly magical – the world’s highest lake, Lake Tilicho (4,950m/16,240ft). Yes, the blue is really that ethereal.

Now we overfly another 17,000-foot-high pass and drop down into the Kali Gandaki Gorge (the world’s deepest). But note – we still haven’t seen Annapurna itself, Annapurna I. Even as high as we’ve been, and of course for trekkers on the ground, you never see the famous mountain itself along the entire Annapurna Circuit.

For that, you must enter the Sanctuary.

Entering the Modi Khola Gorge (see Sanctuary map above), you see two gigantic sentinels on either side – on the left is Annapurna South.

And on the right, the flip side of the Fishtail, is Machhapuchhare from where we see how it gets its name.

Curving left into the heart of the inner sanctum, there it is – Annapurna I, Goddess of Nourishment in Sanskrit, the 10th highest mountain on earth at 8,091m/26,545ft.

Annapurna Base Camp is a glorious place to be – you are surrounded by magnificence.

You never ever forget the thrill of being here.

We’ll celebrate that thrill, and all those we’ve had so far, with a grand party that evening at the Moondance Café in Pokhara.

Next week, we’ll complete exploring the Himalaya’s greatest mountains via The Route to Dhaulagiri. If you want to explore them for real with me this coming April, click here for details to join the Himalaya Helicopter Expedition and have the greatest one-week adventure possible on earth today.

Pack for a Purpose