The Road To Mandalay - A Journey Through Burma - Escape Artist

Burma is a hidden country. Sandwiched between India, China, and Thailand, along with a bit of Bangladesh and Laos, it is essentially the drainage basin of the Irawaddy River, rising in the glaciers at the southeast corner of the Tibetan Plateau and flowing south for 1,350 miles to the Bay of Bengal. 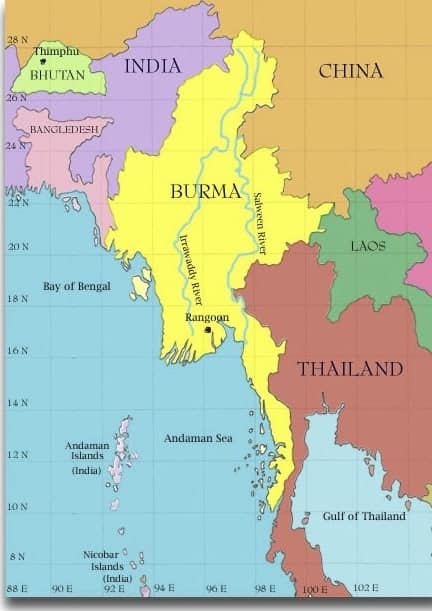 Out of a welter of tribal regions and warring principalities, it emerged into history only about a thousand years ago with the Pagan Empire.  It established Buddhism throughout what is now Burma, and constructed over 10,000 Buddhist temples during the 10th-13th centuries.

2,200 remain on the plains of Pagan today, one of the world’s most wondrous sights — as you can see by the picture above.

The Mongol invasions of the late 1200s wiped Pagan out. Various kingdoms warred, rose, and fell for the next 500 years until the Brits arrived, who in a series of Anglo-Burmese Wars from 1824-1885 colonized and created Burma as a Province of British India.  The capital was Rangoon, built by the Brits into a flourishing city known as The Garden City of the Orient.

Way upriver on the Irawaddy was the city they were all lyrical about – Mandalay.  It was Rudyard Kipling (1865-1936) who made Burma the ultimate of the romantically exotic with his poem Mandalay in 1890.

Ironically, there never was a Bob Hope-Bing Crosby “Road” movie to Mandalay.  It was the original title for their very first in the series in 1940, but changed to The Road to Singapore.

Burma remained the ultimate hidden lure of the East until World War II when the Japanese invaded.  It took the Brits, Americans, and Burmese killing 170,000 Japanese soldiers to get rid of them.  Yet even though the Brits granted Burma independence in 1947, it remained hidden and withdrawn from the world under a Soviet-aligned Military Marxist dictatorship until very recently.

Ethnic Burmese inhabit the Irawaddy basin, while the jungle-clad mountains surrounding it have been the abode for millennia by the China, Kachin, Shan, Wa, Karen, and Karenni tribal peoples – with guerrilla war rebellions against the dictatorship breaking out by them all.

In the 1980s as a private operative for President Reagan’s strategy to terminate the Soviet Empire, I clandestinely crossed from Thailand into Burma on more than one occasion with Karenni and Karen guerrillas.   Meanwhile, the Burmese themselves began demanding freedom and democracy with huge demonstrations in Rangoon.

The military junta resisted, even changing Burma’s name to “Myanmar,” Rangoon to “Yangon,” and moving the capital to an empty plain called Nay Pyi Taw in 1989.

Ten years ago the junta began relenting and freeing up the country, so much so by 2015 I was confident enough to take a small group of friends to explore the country.  We had a wonderful enlightening time.

Now I’m thinking of doing this again next year, as a number of you have asked if I would. What I’d like to show you is a small sample of what we saw – just a hint, a taste of all there is in this extraordinary land.

Burmese devotion to Buddha is the most spectacular in all Asia.  An example is the giant reclining Buddha at Bago. 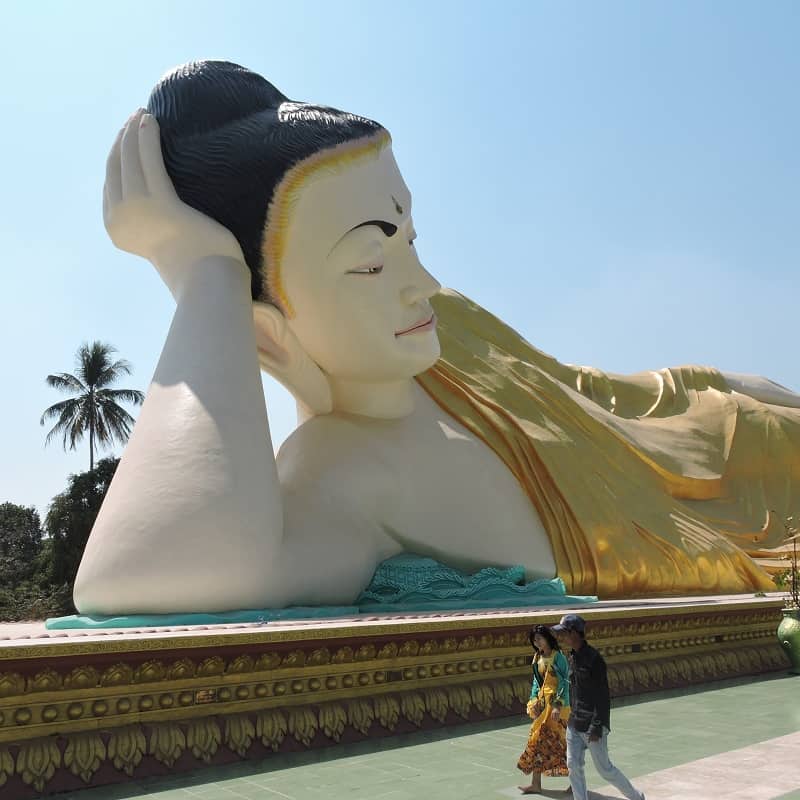 On a mountain top nearby is the Temple of the Golden Rock, where, the legend goes, a strand of the Buddha’s hair under the base prevents the “gravity-defying rock” from tumbling off the mountain.  It is covered in gold leaves pasted on by devotees.

At Heho in Shan State are the Pindaya Caves.  For centuries, Buddhist pilgrims have venerated these caves by placing gilded statues and images of the Buddha along the cave walls and in the crevices.  There are now over 8,000 golden Buddhas.  You climb to the caves in a series of covered steps… and enter a cavern world that is simply unbelievable…

In a roadless remote valley way up in the Shan Hills, we come to a series of villages collectively called Pan Pat.  Here we will find the Kayan tribe, whose women practice a unique tradition of beautification.  Starting at age five, girls have a few brass coils placed around their necks, adding to them progressively as they grow until they are wearing as many as two dozen – becoming what the world knows them as Giraffe women.  (The Shan people call them “Padaung” meaning “long-necked,” but they call themselves Kayan.)

We are not here to gawk.  We are here to make friends, treat them respectfully, and learn about their traditions.  It is an intensely memorable experience to meet these ladies.

Elsewhere in the Shan Hills is the Taung Kwe Zedi – the Stupas of the Cleft Rock – where Buddhist monks congregate to meditate and pray in the early morning light.

In the nearby Hopong Valley is a mysterious site sacred to the Pa-O people called Kekku.

Many centuries ago, thousands of stone temples and towers decorated with stucco statues were built here by no one knows who.  Kekku is an unknown remote place where the only people will be local Pa-O and monks coming for veneration.

Now we come to Burma’s iconic Inle Lake – famous for its extraordinarily calm serenity, the homes on stilts of the Intha people, and their unique leg-rowing fishermen.

As we immerse ourselves in the peaceful beauty of Inle,  we spend time with the Intha fishermen as they row their canoes with a leg wrapped around the paddle leaving both hands free to fish with their conical nets.

North on Inle is one of the world’s greatest wonders – Ancient Pagan (now called Bagan).  There are over 2,200 massive temples here remaining spread over 40 square miles.  It frankly leaves Angkor Wat in Cambodia and Borobodur in Java in the dust.  There is nothing that matches it on the planet.

Our first stop is Shwezigon, completed in 1102 and thoroughly re-gilded as it is thought to contain a tooth of the Buddha.  I couldn’t resist this shot of a monk taking a picture with his cell phone.

Next to it is the Ananda Temple with its gigantic Buddha statues of gold.  My best shot of Ananda is in its reflecting pool.

The View From Above

The ultimate way to experience Pagan/Bagan is to see it in the early morning light from above – in a hot air balloon. Floating silently above this wonderland is indeed one of those “experiences of a lifetime.”  When we land, we have a champagne breakfast amongst the temples.

We end in Mandalay – at the temple on Mandalay Hill where everyone in town meets for the sunset over the Irrawaddy.

Again, this is just a small glimpse – there’s so much more to Burma.  The best time to go is February – so I’m thinking of February 2020.

If this is what you’d like to experience yourself, let me know at Jack@WheelerExpeditions.com

Don’t Wear Red to an Indian Wedding: The Travels and Trials of a White Girl in India,…