Running with the Bulls in Pamplona, Spain - Escape Artist

Wow. That’s about all that comes out of my mouth when I think about running with the bulls last month. Wow and…well…WOW!!!!! 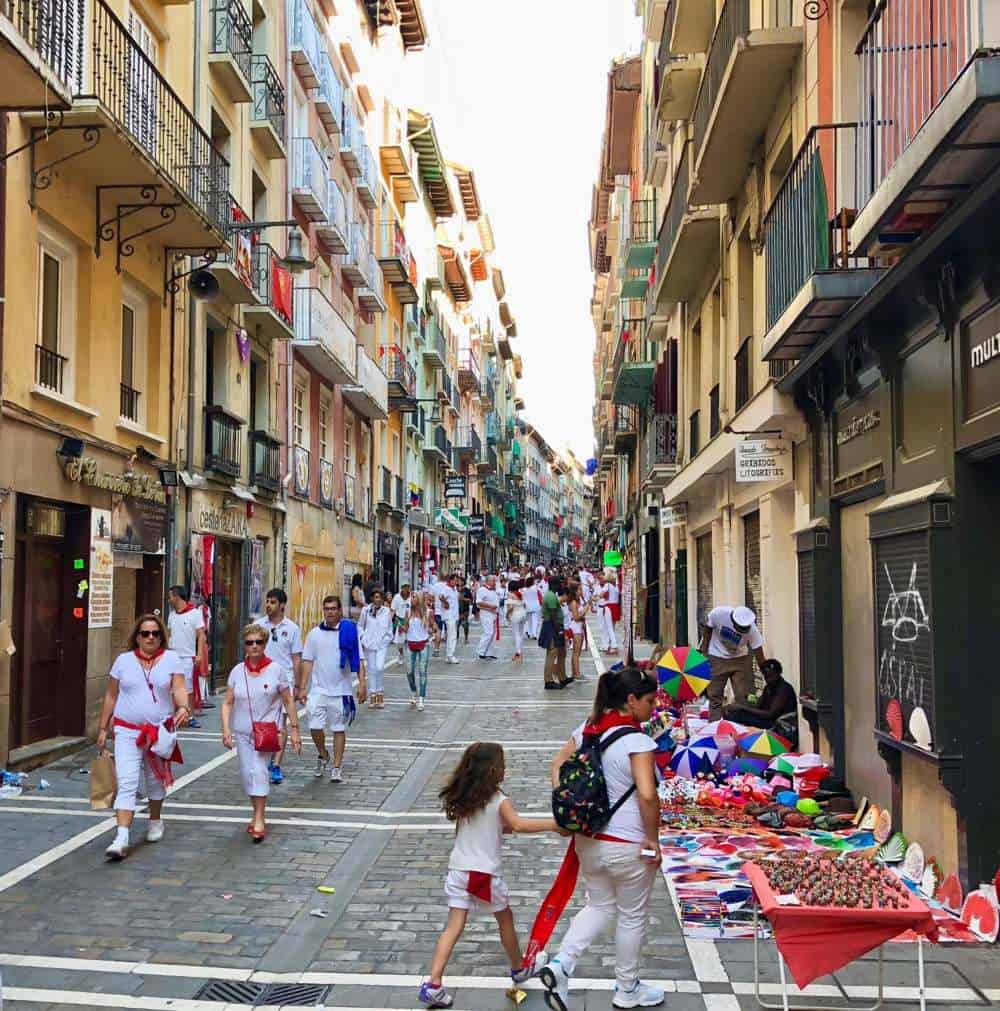 The city of Pamplona, Spain. 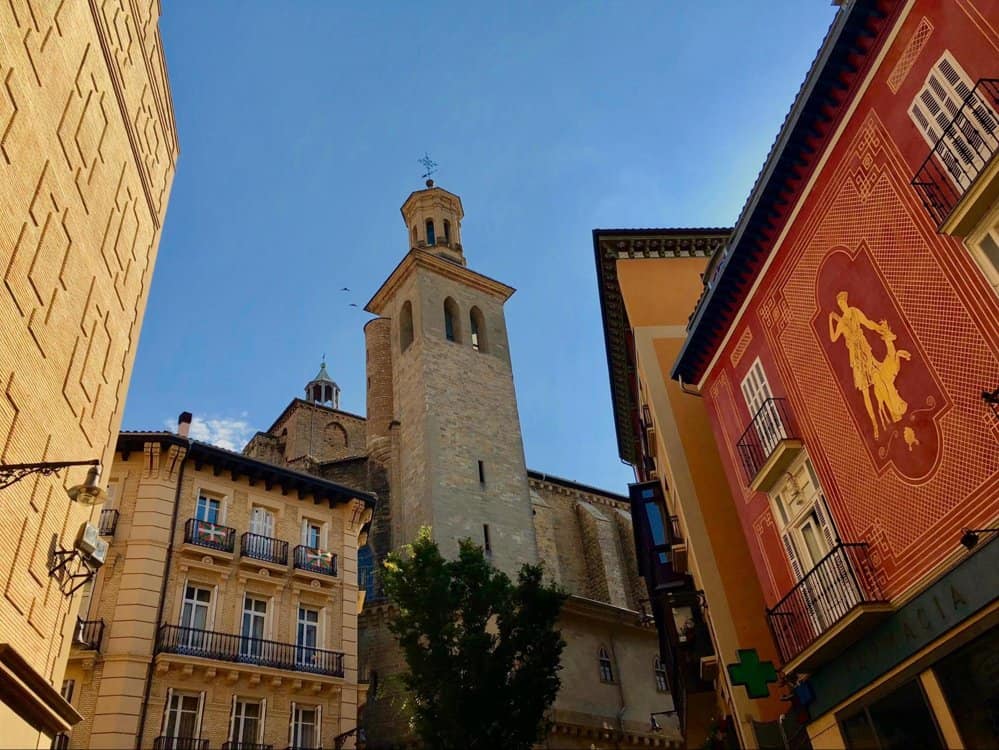 Sometimes words are limiting, so my columns this week and next will feature a lot of pictures and a link to the official video of my running with the bulls. I don’t have one filmed by me personally, because running with cameras, even a GoPro strapped to your head, is forbidden. More on that next week.

But this week, let me share with you how I found myself in a small alley, at 8:01 a.m., on Friday, July 13th, alongside a couple hundred other folks, with 12 sharp horns backed by 7,000 pounds of angry, confused bull racing towards me only seconds away. 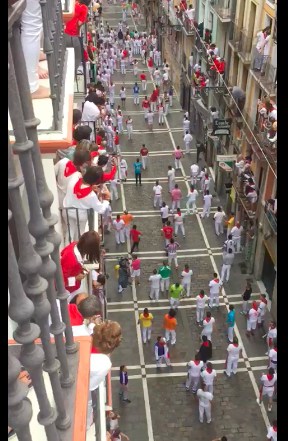 In the alley with the bulls on the way.

Let me back up. Why was I here in the first place? Last year, about this same time, a small group of folks including Joel Nagel, Rachel Jensen, Kathie Peddicord, Lief Simon, and I all went to the Palio di Siena in Tuscany, Italy. The famous horse race around the town square had been on my bucket list for about 14 years, since watching my daughter Amanda chase pigeons around the square as a 2-year-old. Needless to say, seeing this exciting, albeit, quick and frantic event was a fantastic crossing off the list. Here’s a link to the article I wrote about the race last year.

Anyway, while at the Palio, Kathie said that she’d always wanted to go to Pamplona and see the running of the bulls. She’s a huge Ernest Hemingway fan and his 1926 novel, The Sun Also Rises, is his masterpiece about the San Fermin Festival, the running of the bulls, and the bullfights in Pamplona…and getting drunk and fishing, too. Anyway, at Kathie’s urging, we decided that in 2018 we’d meet up in Pamplona for the running and a few days of fun together.

As soon as Kathie had me excited about going to Spain, I got it in my head that I would actually run when we went to Pamplona. So for the past year, I psyched myself up for the event and actually running in the street with the bulls. Truth is, I didn’t know anything about it for most of the year, so with just 3 weeks prior to flying to Spain, I began to watch YouTube videos of the previous year’s bull runs. I, of course, wanted to do some research about the best strategies to stay alive, ungored, and relatively unharmed. More on the specifics of strategy and the course next week, but by all accounts, the most dangerous place on the track is “Deadman’s Curve” or “La Curva.” 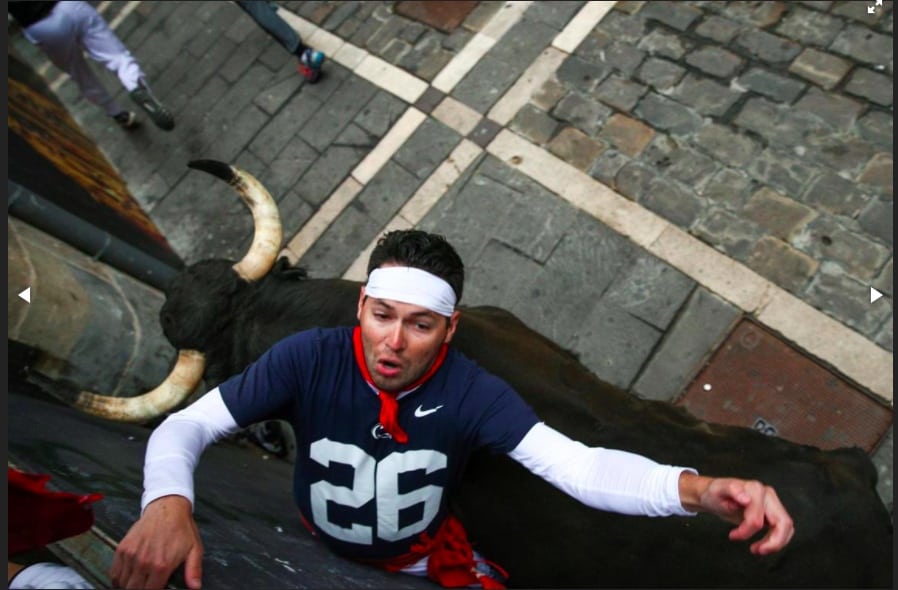 Crunched in “The Curve.” Here’s a guy from the day I ran who didn’t do his research very well.

Now to be honest, I wavered a bit in my decision to actually run once I started watching the videos. The more research I did, the more nervous I became. Each year between 50 and 100 people are injured in the running, some seriously, but in reality, very few deaths. This was somewhat comforting. The most recent goring to death was in 2009. But getting trampled would be no fun either. However, the odds were on my side. With the hundreds who run each of the 8 days of the festival, I figured I’d make it out alive, but I also wanted to remain uninjured.

The running happens each year from July 7th through the 14th. My research showed that even running on certain days is better than running on others. The weekend days are usually far more crowded because people can get off work on Friday, come to Pamplona from all over Europe, party all night, and then run hungover on a Saturday or Sunday morning. Plus, with more people in the street, there’s less room to maneuver. And believe it or not, people are your biggest threat for injury. Risk of death is from the bulls, but people cause the most injuries, so running on a less crowded day is a plus.

Stuck in the U.S. through Wednesday, July, 11th, I left Washington Dulles airport after a visit to the Turkish Airlines Club in B Concourse that evening for the overnight flight to Spain. I arrived in Barcelona on Thursday morning, the 12th, and took the train to Pamplona that afternoon. I really only had one chance at this. Run Friday the 13th or miss the chance.

The running of the bulls is a tradition that goes back 700 years in Pamplona. Originally, just a means to move the bulls to market, eventually a tradition developed of running with them and prodding them along the streets. The big change was when the Festival of San Fermin, originally later in the year, was merged with the timing of taking the bulls to market in 1592. The Running of the Bulls has been a July event ever since. Of course, after the publishing of The Sun Also Rises, the international popularity of the run skyrocketed and the event became a mecca for Hemingway fans and adventure-seekers alike. 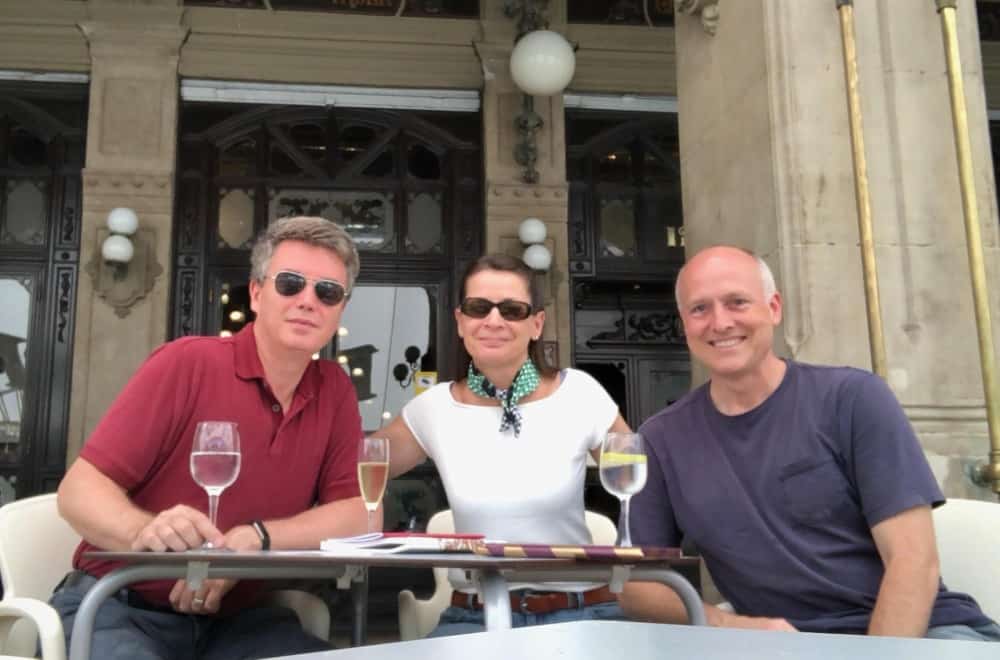 While doing my research on the event, I discovered that the “uniform” during the run is white-on-white with a red handkerchief and sash. Not having much of this in my closet, especially the white pants part, I took my lightest pair of khakis and a white polo, figuring I’d be good to go. Nope. After arriving and realizing that not only is the uniform for the run itself, but it is what you wear for the entire 8-day San Fermin Festival, I was extremely under-supplied. Luckily for me, there were stalls everywhere selling “white-on-white” in several varieties. 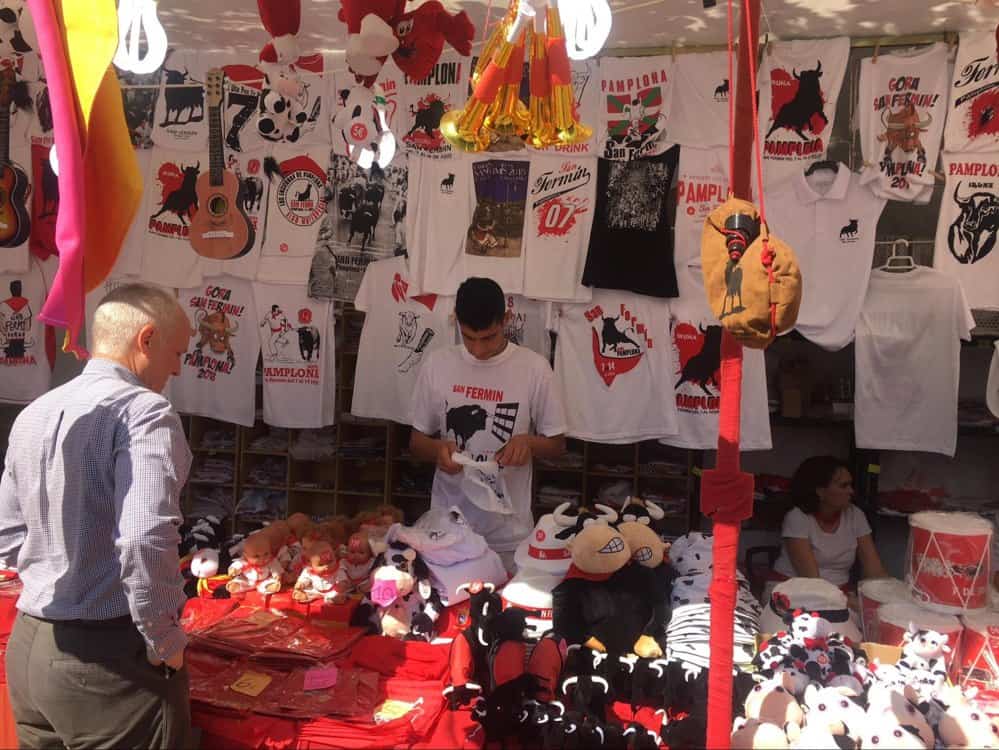 Stocking up on 3 days of white-on-white with a splash of red thrown in.

The city of Pamplona is in the foothills of the Pyrenees Mountains, and the views from the walls of the city are spectacular, especially at sunset. Thinking ahead, Leif arranged a dinner for all of us the night before our running. The group, including the next day’s four runners (Rachel Jensen, Harry and Kat Kalashian, and I) along with our support team of Lief, Kathie, Bohn Dunbar, and Terri Gilbertson enjoyed a “final supper” as some called it at El Buho. The restaurant provides incredible views of the mountains, but it’s also the perfect perch to watch “our bulls” run from the main corral, up to the starting corral, for tomorrow morning’s run. The Calamari was outstanding.

Dinner with friends, exquisite calamari, “our bulls,” and a Fantastic 10:00 p.m. sunset at El Buho.

After dinner, we enjoyed a nice walk back through town where I dropped off at my hotel, Hotel Maisonnave. By the way, this is a great place to stay in the old town for the run, only a block off the actual route and central to everything. The service was spectacular and the rates very reasonable for the town’s main annual attraction.

Inspired artwork in the lobby of Hotel Maisonnave and inspiration for the run in my room.

On the way through the lobby to the elevators to retire for the evening, I passed the sentinel of the bull and his picture on the wall. Upon arriving to my room, I saw that the hotel was nice enough to provide me with a lucky red handkerchief to tie around my neck for the run the following morning. Staring at the ceiling as my stomach turned, waiting for sleep to come, I hoped it would be enough.

I hope you enjoyed reading part 1: Running with the Bulls in Pamplona, Spain. Here are some additional articles about Spain that I’m pretty sure you’ll love!

Requirements For Retiree Residency In Honduras