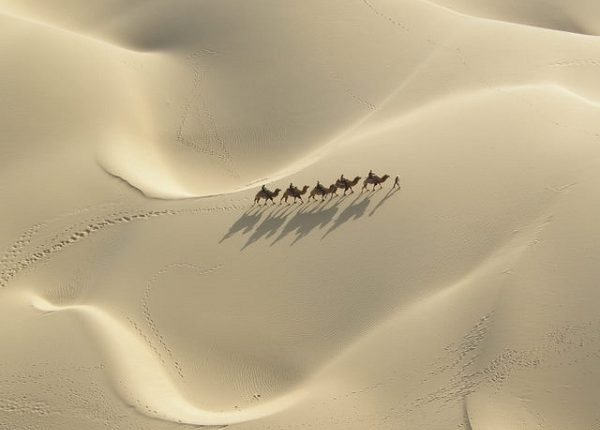 I took this picture flying in a motorized hang glider over the Lop Nor Desert of Chinese Turkestan in 2008.

For most people, the image that first comes to their minds about China is vast swarms of people. When I think of China, I think of vast emptiness. I think of this:

This vast area of the Tibetan Plateau with the Takla Makan sand ocean above it (Takla Makan, Marco Polo tells us, means “You go in, you don’t come out”) that merges into the Lop Nor, then into the Gobi Desert, is two-thirds of China (2.5 million square miles/6.5 million square kilometers) – yet, it is virtually uninhabited.

Save for a scattering of small towns, tiny villages, and a bare handful of cities, along with a few bands of wandering nomads, no one lives in the satellite photo you see above.

Yet, that is only one aspect of Remotest China.

China and America are in many ways geographically compatible, yet in other ways, the difference is enormous. As you can see, they are of comparable size and latitude.

The northernmost and southernmost points in China are 52N in Manchuria and 20N in Yunnan, while those of the contiguous U.S. are 48N in Maine and 23N in Florida. Washington, DC, is 39N while Beijing is 40N.

Yet, it jumps right out at you – China is essentially landlocked, surrounded by other countries, while the U.S. has thousands of miles of empty ocean on either side.

China has more countries on its border than any other in the world – 14 on land (North Korea, Russia, Mongolia, Kazakhstan, Kyrgyzstan, Tajikistan, Afghanistan, Pakistan, India, Nepal, Bhutan, Burma, Laos, and Vietnam) and 4 right offshore (South Korea, Japan, Taiwan, and the Philippines) – 18 in all.

The U.S. has Canada and Mexico, plus the Bahamas and Cuba offshore in the Caribbean, with Russia across the Bering Straits from Alaska.

Moreover, while the U.S. has vast oceans on either side, China is surrounded by the frozen tundra of Siberia, vast deserts in Central Asia, and the highest mountains on earth (the Tian Shan, Karakoram, and Himalayas) – it’s landlocked.

It’s also sea-locked. China has no sovereign access to the Sea of Japan, as the border of North Korea extends to Russia. This is the last 11 miles of the Tumen River as it reaches the sea. All of Northeast China or Manchuria is blocked.

But what good would it do if it weren’t? Certainly not strategically, as that access could easily be bottled up by Japan.

Same with the East China Sea. Japan’s Ryukyu Island chain goes practically all the way to Taiwan. No strategic access to the Pacific there either for China.

This is why China is always picking fights with Japan over the East China Sea. Here is a map of the East China Sea depicting how it is territorially divided by Japan (white line) and China (red line). Which looks more reasonable and less imperialist to you?

It’s even more absurd – and dangerously so – in the South China Sea. This is the world’s most valuable sea transit route – an estimated $5 trillion worth of goods are transported through the South China Sea shipping lanes each year, including more than half the world’s annual merchant fleet tonnage and a third of all maritime traffic worldwide.

The South China Sea is bordered by, in addition to China, Vietnam, Malaysia, Indonesia, Brunei, the Philippines, and Taiwan. China has picked an angry war-threatening fight with every one.

Yet, China has done exactly that. This is the infamous “9-dash line” the Chinese government prints in its official maps of China to include the entire South China Sea all the way to the 12-mile limit of every bordering country, a body of water the size of Mexico and over 1,000 kilometers in many places from China.

One basic lesson any child learns in Kindergarten is learning to share, all the toys are not yours. China’s rulers never graduated from Kindergarten.

Thus, the entire coastline of China is hemmed in by island nations right off its shore, to whom it responds not with win-win relations but win-lose belligerence and bullying. It does the same with most every country on its land borders as well – especially so with India.

This is a primary cause of China’s geographical, geopolitical, and strategic isolation from the world – Remotest China.

Returning to Remotest China within China, as we saw last week in Part III – Chinese China, that’s the western two-thirds of China where only 6% of China’s population live.

We looked at Inner Mongolia and the Gobi Desert in Part II. Now let’s look at the rest.

What Beijing calls Xinjiang (shin-john, New Frontier), explorers in the 19th and early 20th centuries called Chinese Turkestan, while out of earshot of government informants the people who live there call it East Turkestan.

That’s because the inhabitants of Xinjiang – other than Han Chinese colonists paid by Beijing to move there – are ethnic Turkic and religiously Moslem, just like their cousins in West Turkestan: Kazakhstan, Kyrgyzstan, Turkmenistan, and Uzbekistan (the Tajiks of Tajikistan, while Moslem, are ethnically Iranian-Persian).

While Xinjiang is sprinkled with a good many Kazakhs, Kyrgyz, and a few Tajiks, most natives are Uighurs (wee-gurz), a Turkic people closely related to the Uzbeks of Uzbekistan. Beijing designates Urumqi, a Han Chinese colonial city, as the provincial capital – but the Uighurs consider Kashgar (Kashi on the map) as their capital. That’s the place to go.

Where else would you find a place’s holiest shrine as The Tomb of the Fragrant Concubine?

This is not a mosque. It is a Sufi shrine in Kashgar, the tomb of several generations of the Apak Hoja family that ruled “Kashgaria” or southern Xinjiang from the mid-1600s to the mid-1700s, revered for being a Sufi holy family. Entombed here is the great grandniece of Apak Hoja known to all Uighurs as Iparhan, “the fragrant concubine.”

Born in Kashgar in 1733, in 1760 she was chosen to join the harem of the Chinese Emperor, Qianlong (1735-1796), in Beijing because of her renown for possessing an “exceptional bodily aroma.” Becoming the emperor’s favorite, she was awarded the rank of Rong Fei, “imperial concubine of the first rank.” Upon her death in 1788, her body was reverently carried in a special casket all the way back to Kashgar.

Marco Polo, with his father Nicolo and uncle Maffeo, came to Kashgar in 1273, where the Silk Road to China splits in two to go around the Takla Makan. They traversed the rarely taken Southern Silk Road, originally known as the Jade Road, for along it were China’s sources of jade.

The ancient oases of Yarkand, Khotan, Niya, Charchan, and Charklik are fascinating. I drove the route in 2008. Even though most of it is paved now, Polo would recognize parts of it.

If you venture out into the edge of the Takla Makan, you’ll find shrines to Sufi saints hidden in the sands.

I also drove the Northern Silk Road as well. The most interesting place along it is Turfan – 3,000 years old, it sits in the lowest place on earth next to the Dead Sea (505 ft. below sea level). Nearby is a place even older, the Lost Kingdom of Yar. Had to have my picture taken among the ruins:

And at Turfan’s famous landmark, the Emin Minaret.

Yet, the most fascinating part of Remotest China is Tibet. And it’s also the most tragic, for the Chinese Communists have been conducting a campaign of genocide and cultural extinction of the Tibetans for 60 years that continues today.

I have driven over 10,000 kilometers criss-crossing Tibet east to west and north to south. It is now not much more than a Tibetan Theme Park for Chinese tourists. One of the world’s greatest architectural masterpieces built centuries ago in Tibet’s capital of Lhasa is the incredible Potala, the Palace of the Dalai Lama.

I took this in my first expedition across Tibet in 1986. It was an unforgettable thrill to be there. It is no thrill, however, for Tibetans. For them, the Potala is “dead,” for the Dalai Lama no longer lives there. The Potala is instead a bitter reminder to Tibetans that their country has been stolen, that they are slaves to their masters, the Chinese.

If you go to Tibet yourself, realize when you visit the famous monasteries like Drepung, Sera, Sakya, Ganden, Tashilumpo et al that this is for show – every red-robed monk you see is either an agent of Chinese secret police or under their watchful eyes.

To see Tibetan religion in full gear, make a pilgrimage to the sacred mountain of Kailas in far western Tibet.

For all Tibetans, all Buddhists, all Hindus, Kailas (alt. Kailash) is the spiritual center of the universe. Over 22,000 feet high, it is never climbed. The pilgrimage is to circumambulate it. I was able to do this in 1986. The devotion of Tibetans with me was inspiring.

And by all means, stand in awe at the foot of Chomolungma, the Mother Goddess of the Snows, the North Face of Mount Everest.

I took this photo in October 1987. Years later, I was privileged to meet His Holiness the Dalai Lama. He had no illusions that someday Tibet would once again be a free and sovereign nation. He did, however, fervently believe that the day will come when China is governed by more humane people who would treat Tibet, its culture, and its people with the dignity, the respect, and autonomy they deserve.

His prayer is the same as mine. 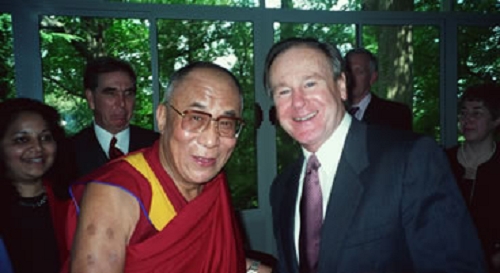 What You Need To Know To Move To Italy