Why Americans Renounce Their Citizenship 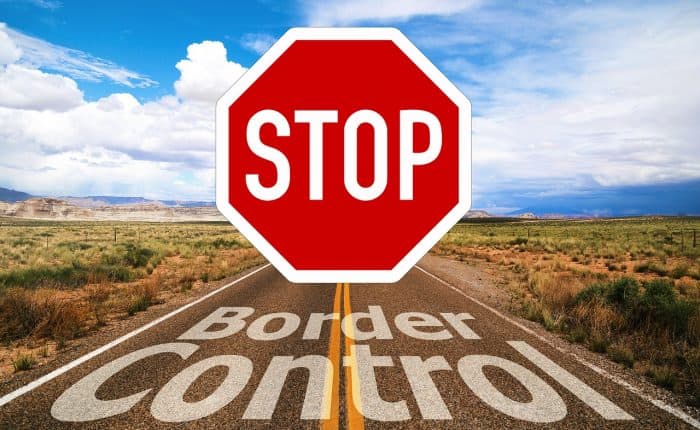 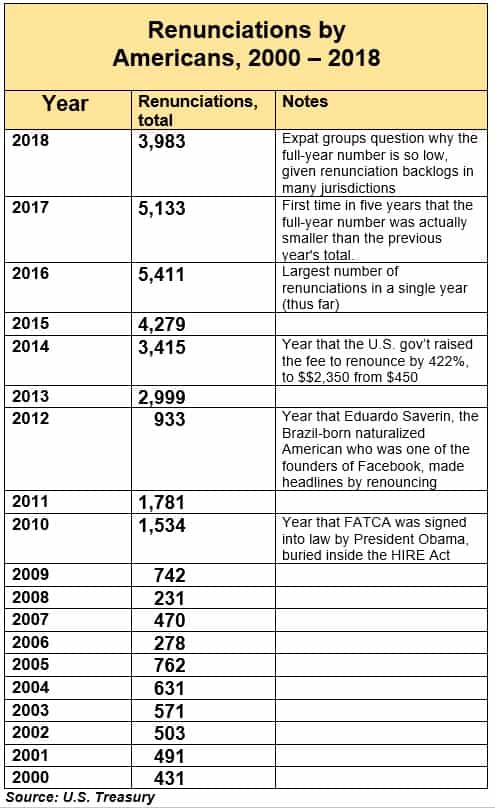 The Above statistics are from the American Expat Financial News Journal.

Politics aside, many Americans seek to renounce because of burdensome tax and reporting laws that hamper working and living abroad. Many of us are willing to pay our taxes, but draw the line at telling the government where we have our accounts and our assets.

Daniel Samuelson is one such American.

American-born, but having lived and worked in Switzerland for 12 years as a software developer, Samuelson first considered renouncing his citizenship in 2012, after being unable to refinance his $450,000 condominium through a Swiss bank. The bank refused his request due to the Foreign Account Tax Compliance Act (FATCA), which was enacted in 2010 to keep tabs on the non-US financial accounts of US citizens living or working abroad.

However, FATCA places the task of identifying these accounts upon non-US financial institutions, such as the Swiss bank that denied Samuelson’s refinance application. The banks must be FATCA-compliant and report the accounts of US citizens to the IRS – if they don’t they can face huge penalties. So many banks refuse to even open a checking account, let alone refinance a half a million-dollar condo, for Americans.

Like many Americans, Samuelson renounced his citizenship because on US tax laws that require US citizens living abroad to pay taxes to the IRS, in addition to the country in which they live. This tax requirement places a significant strain on the bank accounts of many expats, leaving them with no option but to renounce their citizenship.

Here’s a fun fact to stump your friends: The only other country that enforces taxation on their citizens living abroad is Eritrea – a tiny country of 6 million that spans 45,000 square miles and is bordered by Ethiopia, Sudan, and the Red Sea. Not in the UK. Not France. Not any other modernized Western country. Eritrea!

The intention of FATCA is for non-US financial institutions to identify the bank accounts of approximately 9 million Americans who are living abroad and hold them accountable to US taxation. FATCA also encourages Americans living abroad to renounce citizenship so that they can live without the extra burden of taxation – or, for citizens who fail to report bank accounts, potential criminal prosecution.

Daniel Samuelson didn’t want to renounce his citizenship, he resorted to it as a strategy to improve his financial situation in Switzerland. In fact, his ancestors had sailed to the US on the Mayflower and he felt a strong affinity for the country of his birth. Although he also had 700 years of family history in Switzerland, he planned on retiring in the US.

But now he can’t.

Renunciation of US citizenship is a permanent and binding act which bars such persons from ever residing in the US again. The only recourse available to previous US citizens who have renounced citizenship is to apply for a tourist visa, just like any other foreign traveler.

Due to its permanency, it is wise to consider the consequences of citizenship renunciation before going through with it, and consider alternative solutions. However, for some folks, renouncing their US citizenship is the best solution.

According to US attorney Joel Nagel, an expert in expatriation, “US citizenship is a problem to be solved.” Nagel claims that the easiest way for Americans living abroad to alleviate the hardship of US tax compliance is to simply cut ties through the process of citizenship renunciation. In his work, he helps Americans do this.

It might sound funny, but the first step in the renunciation process is to confirm that the applicant has US citizenship. This is a foregone fact for anyone born in the US, but persons born overseas to a US citizen may also have US citizenship if their parent filed the right application. Some people born abroad don’t realize that they have US citizenry – so, if you are unsure, it’s best to check!

For persons who are crystal clear about their US citizenship, the first step in the renunciation process is to prepare US tax returns for the 5 preceding years and settle any unpaid debts to the IRS and state tax authorities.

Renouncing citizenship is fairly easy, but not cheap. In 2014, due to large numbers of applicants, the government filing fee was raised to $2,350. In addition to the flat fee, many people also need legal help to prepare the application, which can be costly. Add to this 5 years of back tax preparation, an audit, legal fees, etc. and some end up spending over $60,000 plus taxes due. Following the fees and tax payments, applicants must file the appropriate paperwork and make an appointment at a US consulate or embassy in the country in which they currently reside.

Finally, the US citizen must swear the oath of renunciation in the presence of an official consular representative. The oath must be stated out loud as follows: “I hereby absolutely and entirely renounce my United States nationality, together with all rights and privileges and all duties of allegiance and fidelity.”

After the payment, the meeting, and reading of the oath, the process of citizenship renunciation becomes complete and the ex-US citizen receives a Certificate of Loss of Nationality. You can remove yourself from FATCA compliance at your foreign banks by showing them this certificate.

For US citizens with over $2 million in assets, a one-time expatriation tax – also known as the “Billionaires Amendment” – must be paid as well. You basically pay a capital gains tax on all your assets as if you had sold them on your day of renunciation.

The citizenship renunciation process is sure to be a bittersweet and emotional endeavor. However, it is also a sure-fire way to avoid unnecessary taxation by the US if one plans on living abroad for the long-term.

But a word of caution: I hear from people all the time about how they wish to dump their US passport and get the IRS out of their pockets. The first question I always ask is, “what passport will you be going too?”  I often get a blank stare.

Before you can give up your US citizenship, you must have another in-hand. If you do not have a second passport, it’s impossible to give up your first passport. Doing so would leave you stateless, which is impossible for many reasons.

So, if you’re thinking about giving up your US citizenship, or you are ready to pull the trigger today, step one is to gain citizenship and a passport from another country.

If you have a second citizenship through your family, as Samuelson did in Switzerland, you’re set. If not, you need to buy a passport or begin the long process of gaining residency and eventually citizenship in a foreign country.

There are a number of Caribbean countries that will sell you a passport for $100,000 to $350,000. At the higher end, there are two EU countries that offer citizenship for an investment of $1.2 million.

If you don’t have the cash or want to immigrate to a country that doesn’t sell its passports, then consider residency in a low tax country. While just about every country has a residency by investment program, very few will allow you to live tax-free.

In my opinion,  the best deal going is Panama. If you’re a US citizen, or 1 of 50 countries you can get residency in Panama with the Friendly Nations Visa or an investment of only $20,000. After 5 years of residency, you can apply for citizenship and a passport.

Note that Panama will tax your local income but not your foreign source income. If you are operating a bar or selling to Panamanians, you will pay income tax. If you are running an Internet business with no customers in Panama or trading your own stock account, you will pay no tax in Panama.