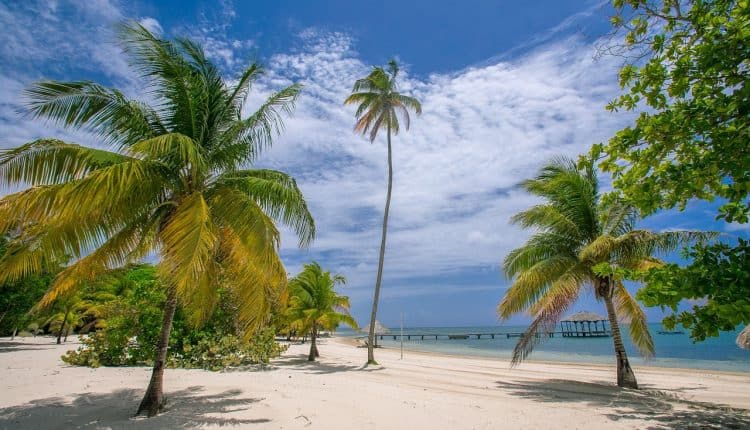 The Federation of Saint Kitts and Nevis is a single nation comprised of two islands, though its official name is often abbreviated to just Saint Kitts or St. Kitts. Known more formally as Saint Christopher Island, Saint Kitts is the larger of the two islands. Separated by a two-mile channel of water called “The Narrows,” the two sister islands were some of the first to be colonized by European settlers, earning them the title of “The Mother Colony of the West Indies.” Originally called Liamuiga (“fertile land”) by its inhabitants, Saint Kitts appealed to early settlers for its rich volcanic soil, fresh water, and verdant forests. Though the Federation is the smallest Caribbean nation by mileage and population (104 sq. miles and 45,000 people), its temperate climate and numerous white sand beaches have made it one of the Caribbean’s hottest destinations in recent years.

Saint Kitts is readily accessible from most of the world and is a popular stop on many major cruise lines. In addition to cruise ship drop-offs, visitors to Saint Kitts may arrive by air, with flights departing daily from Miami and New York, and twice weekly from London. Whether by air or sea, package deals combining transport with lodging and/or pre-planned activities often offer a better deal and more support for travelers than booking trip components separately. Robert L. Bradshaw International Airport, right in the center of the island, even has a private terminal available for a price to luxury travelers seeking fast-tracked customs procedures, limousine transfers, complimentary champagne, and outdoor swimming areas for an exclusive welcome or departure from Saint Kitts.

Like all members of the Organisation of Eastern Caribbean States, Saint Kitts uses the East Caribbean dollar as its official currency, although U.S. dollars are also widely accepted on the island. The ECD has maintained the same fixed exchange rate of US $1 = EC $2.7 since July of 1976. National tax rate is set at 12%, and the customary gratuity for hotel and restaurant services is 10% – some locations may automatically include this on the bill, but others may not, so it’s best to check every time.

No visitor to Saint Kitts should go hungry with all the dining options available on the islands, particularly in the capital city of Basseterre. Fresh fish caught that morning can be readily found at markets or prepared at restaurants alongside an abundance of hefty lobsters. Traditional dishes to look out for include goat water stew, made with goat meat, papaya, and dumplings in a tomato broth; conkies, a boiled sweet potato and cornflour delicacy similar to tamales; and stewed salt fish with spicy plantains. Those looking to imbibe can enjoy a cocktail at any number of casual beach bars or jump into the nightlife scene at The Strip on Frigate Bay for drinks, dancing, karaoke, live music, and a good time.

For such a small country, Saint Kitts & Nevis has no shortage of big events. The yearly Saint Kitts Music Festival brings together big names in music from around the Caribbean islands, with 2016’s lineup featuring international stars 50 Cent and Damian Marley. The big annual event on Nevis is Culturama, a decades-old festival founded to preserve and promote local customs and folk art. Scheduled for the first weekend of each August, the festival coincides with Emancipation Day, when African slaves were freed from servitude. Since its inception in 1974, when the program included dancing, drama, folk singing, arts and crafts, a local recipe contest, a beauty pageant, and a calypso competition, the festival has drawn crowds to the tiny island and celebrated the value of traditional ways in an increasingly modern world. Various other celebrations include the Battle of St. Kitts reenactment in March, Independence Day in September, and the increasingly popular Latin Fiesta in October. St. Kitts even hosts its own Fashion Week in November.

Across both islands, the main event each year is the St. Kitts & Nevis National Carnival, or “Sugar Mas,” a weeks-long celebration from late November to early January. Unlike other nations’ take on “Carnival” as a pre-Lenten blowout, the festivities on St. Kitts and other Caribbean islands are a part of the Christmas season instead, lending island flair to the holidays. Moko-Jumbies brave the heights above parade-watchers’ heads, dancing with abandon on wooden stilts that elevate them six feet in the air. Dancers and spectators flood the streets during the J’ouvert Parade, alongside masquerade performers in peacock-feathered headdresses and fringed costumes and a troupe of masked clowns accompanied by a string band. There is, of course, plenty of calypso and soca music throughout, and the Calypso King/Queen Monarch competition is taken so seriously that its winner is crowned by none other than the Prime Minister himself.

A quieter, but no less thrilling island experience might involve a hike up one of Saint Kitts’ three volcanoes, particularly Mount Liamuiga. The two-hour climb to the top isn’t for the faint of heart, involving mazes of slippery tree roots and nearly vertical stretches en route to the summit, but intrepid adventurers who reach the top will be rewarded with an unparalleled view above the rainforest canopy. It’s best to go with an experienced guide who can warn against potential missteps during the hike, but any traveler will have plenty of company along the way: mongooses, voles, vervet monkeys, blue snails, and a variety of birds nesting in the trees.

Those who prefer to stay seated while sightseeing will enjoy a ride on the Scenic Railway, an 18-mile holdover from the train routes built to benefit the sugar industry in the early 1900s and now offers a far more relaxing journey to its passengers. The open-sided double-decker carriages with air-conditioned lower levels provide an all-in-one opportunity to view all the main island’s sights during a three-hour, 30-mile circuit. The tour takes passengers past the ocean, cliffs, rainforests, canyons, sugar cane fields, and farms, while also pointing out significant landmarks along the way: the Prime Minister’s home, Brimstone Hill Fortress (a 17th-century citadel and UNESCO World Heritage Site, called “the Gibraltar of the West Indies), and the burial place of American President Thomas Jefferson’s great-great-grandfather. The tour guide’s real-time live narration is even supplemented by a three-part a cappella choir singing traditional hymns and local folk songs, plus free drinks to wash down all that island history.

The beaches, naturally, are not to be missed. For every type of beachgoer, there’s a beach that will meet their needs. Seekers of seclusion and quiet will love Banana Bay, which requires a car ride to reach but offers a sense of calm and privacy among the palm trees. South Frigate Bay during the day retains some of its nighttime party sensibilities and remains constantly active while being perfect for swimming, water-skiing, windsurfing, or simply people watching; North Frigate Bay, where many major hotels and restaurants are situated, has a similarly lively atmosphere. Snorkelers will have plenty to see in the reef just off White House Bay, past the black sand coast at Dieppe Bay Beach, and at Conaree Beach, where the volcanic and coral halves of Saint Kitts meet.

Potential investors in Saint Kitts can benefit from the country’s citizenship-by-investment program, in which qualified investors who have passed a government background check and contributed a minimum of $400,000 (USD) to the development of an approved real estate property or donated $250,000 (USD) to the Sugar Industry Diversification Foundation charity are entitled to apply for citizenship. With the real estate option, investors are allowed to sell the property after a period of only five years, making the invested assets recoverable, unlike the nonrefundable charity donation to the SIDF.

If citizenship is granted, there are no residency strings attached, meaning a newly minted citizen is free to come and go from Saint Kitts at their leisure. As a benefit of their new citizenship, they can enjoy visa-free travel to over 80 countries, including all of the European Union, Switzerland, Canada, and Ireland as an added bonus. Saint Kitts citizens also benefit from the country’s lack of personal income, wealth, and inheritance taxes. The Saint Kitts & Nevis government does not prohibit dual citizenship and does not report its own citizenship registries to other countries.

Whether arriving by ship or plane, any traveler to Saint Kitts & Nevis is sure to find plenty of reasons to stay.