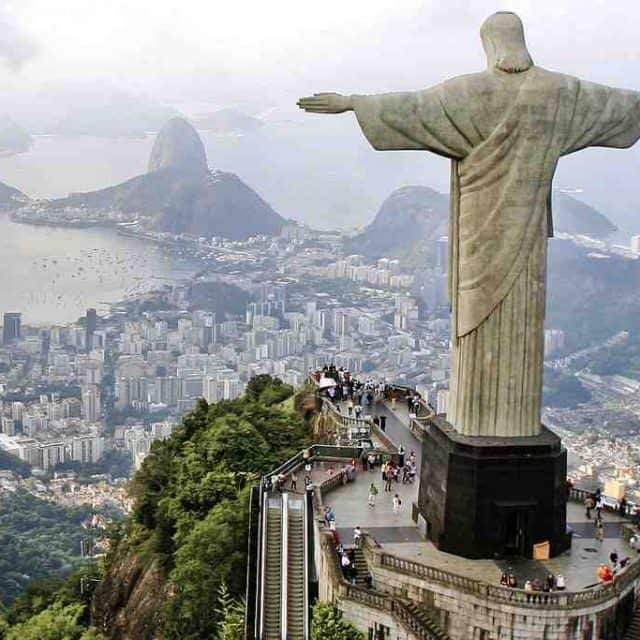 Brazil is a highly sought-after destination for many expats who wish to relocate to a place of beauty and culture. It’s the main destination for tourism in all of South America and second in all of Latin America, after Mexico. It’s no wonder, with sights such as the Christ the Redeemer statue, the powerful Iguazu Falls, the Amazon Forest, and some of the continent’s most beautiful beaches. These are just a few of the reasons expats are choosing to live abroad in this inviting country.

The earliest evidence of human habitation in the region now known as Brazil goes back about 11,000 years. The oldest pottery found in this area was dated back to around 6,000 BC. Before the Portuguese arrived, the Marajoara people inhabited the land.

The Marajoara culture flourished from 800 CE to 1,400 CE. These people had complex settlements developed and a population as large as 100,000. They are noted for having built mounds that have been excavated in more recent years. This civilization ruled until the arrival of the Portuguese in the 16th century.

The Portuguese arrived under Pedro Alvares Cabral and claimed Brazil for the empire on April 22nd, 1500. Amid much fighting and turmoil, the Portuguese took over and began heavily exporting raw cane sugar. During this time, they began a slave trade from West Africa to work the sugar plantations. These sugar cane exports began to decline by the end of the 17th century, at which time the Portuguese discovered Brazil’s vast amount of gold, and the Brazilian gold rush began.

Slavery was abolished in Brazil in 1888, which led to a heavy need for laborers. This is where the Asian influence comes from, with Brazil having a large population of Japanese people. It was during the early 20th century that Japan underwent a transition period of its own and faced unprecedented political turmoil. Many of Japan’s people moved to Brazil looking for opportunity and began filling these labor positions.

As a result of this diverse mix of cultures, Brazil boasts a rich culture of its own, made up of European, African, and Asian influences.

Brazil has a mostly Portuguese influence, with most of its population practicing Roman Catholicism.

The food is highly influenced by each of the different cultures known to Brazil. It varies due to a mix of influences, starting with that of the original indigenous people and even showing influence from Africa. Some of these popular dishes include Feijoada, which is the country’s national dish, vatapa, moqueca, polenta and acaraje. Most of the popular meals listed include variations of fried meats, cheeses, beans, rice, and/or potatoes.

The national drinks of Brazil are coffee and cachaça. Cachaça is a distilled drink made from sugarcane juice. The sugarcane is fermented and this is the most popular distilled alcoholic beverage in the country. You can find it as an ingredient in many tropical mixed drink recipes. The Portuguese discovered this drink when working with the sugar cane of Brazil.

Visual arts, theater, and cinema are all important to the Brazilian culture. Even more than that, futbol, or soccer, has a huge influence as well, with Rio de Janeiro having hosted the World Cup on two separate occasions.

Brazil offers several residency options in the form of numerous visas, all classified under temporary or permanent residency status:

Tourist Visa – Apply for this visa when entering the country. It is good for 90 days.

Business Visa – Similar to the tourist visa, the business visa is also valid for 90 days, but it is used only if you are working in the country on a temporary job, such as a conference or for technical training.

Work Visa – This can either be considered a temporary or permanent residency visa depending on your specific needs. You’ll need a letter from your employer and the proper paperwork to attain this visa, and it will be valid for the dates specified in your work contract.

Investor Visa – Obtained by investing at least $50,000 USD in an approved form to the country’s economy. The $50,000 must be kept in a Brazilian bank. Alternatively, you can start a business and employ Brazilians for this visa.

Pension Visa – If you choose to retire to Brazil, you must only prove that you have a consistent, reliable source of income that equates to at least $2,000 USD per month. This must be kept in a Brazilian bank account, and an additional $1,000 per dependent is also required when bringing along family members.

Brazil’s cost of living can be somewhat higher than that of other South American or Central American countries. However, it is still much more affordable than many North American and European countries. As with any other country, this will depend heavily on where you choose to settle. Large cities such as Brasília, Rio de Janeiro, and Sao Paulo are more expensive than most other areas of the country. Joao Presso is the most popular city for expats to relocate and retire, thanks to both its beautiful beaches and its lower cost of living. In Joao Presso, the prices run as such:

Brazil covers nearly half of South America within its borders. It mostly consists of beaches and plains on a relatively flat plateau. Parts of the country are covered by the tropical Amazon Jungle, while other areas, north of the Amazon, are partly forested highlands and partly forested desert. Between the Brazilian Highlands and the Amazon River of the south are some mountains, however they do not reach very high. Overall, the climate for Brazil can be described as hot and humid, but of course breezy on the beaches. The best time to visit is generally from March to November, during the dry season.

Mikkel Thorup Mar 17, 2020
The Top Destinations to Visit in Brazil Brazil has recently come to light as one of the most popular tourist…

How violent is Brazil, really? Well that depends on where…

staffwriter Dec 14, 2022
Investing in Real Estate Abroad — Still A Smart Choice Buying real estate, regardless of the reason, is a huge…

Demand Vacuums And The Real Estate Opportunities in…

Turnkey Rentals in Fortaleza Brazil – What Would a…

An Expat’s Guide to Investing in Beachfront Property in…