The Top Destinations to Visit in Brazil - Escape Artist 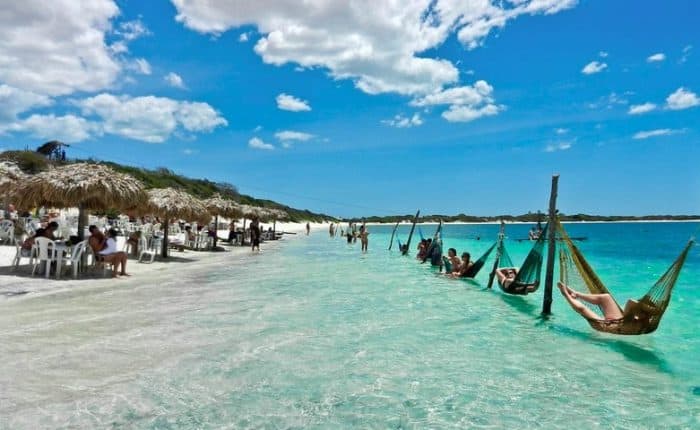 Brazil has recently come to light as one of the most popular tourist destinations in the world. When you compare the country to its Latin American counterparts, Brazil comes second only to the Dominican Republic in terms of revenues—even then, the difference isn’t too high. Reports keep rolling in every day that speaks of the success of the pro-tourism policies introduced by the government. In this time, the Brazilian state has spent big on improving tourism infrastructure. Brazil has transformed into a major tourist hub that is expected to continue growing for the foreseeable future.

Brazil itself has a very rich culture and history that make it an immense joy to visit. It’s home to the Amazon forest, has some of the most beautiful beaches in the world and there’s a lot to be said about the cuisine and the nightlife in the country. Each city in the country has something special to offer to visitors, the most notable of these being:

Sao Paulo has traditionally been one of the more popular places to visit in Brazil. Owing to its easy accessibility and the high levels of urbanization it’s often set apart from other major cities throughout the entire South American continent. The city also happens to be the center of most of the commercial and cultural activities throughout Brazil.

Some popular destinations to visit in Sao Paulo include the Sao Paulo Cathedral, Museu do Futebol, Museu de Arte de Sao Paulo, the Ibirapuera Park, and many others. If you’re a first-timer coming to Brazil, Sao Paulo is one of the best destinations anyone can go to.

Brasilia is the capital of Brazil, chosen for its central location to replace Rio De Janeiro as the seat of the government. Because it’s the country’s capital, Brasilia is a lot more developed than many other regions in the country and combines the Brazilian culture with modern innovation that is an absolute delight to witness.

The city is the center of the most advanced and sophisticated architecture throughout the country. People actually go to Brasilia just to check out the advanced techniques employed in the construction of the city. The notable destinations in the city include:

This isn’t even the full list of places that people flock to—there are plenty of other places throughout the city that you can visit—each with its own history and unique architectural expression.

Paraty is probably one of the most fascinating places to visit throughout Brazil, owing mostly to the sheer versatility in the tourist attractions in the city. It’s a sort of mixture of natural beauty and urban landscapes and offers a little bit of everything to visitors. The Brazilian government has gone out of its way to maintain the natural landscapes surrounding the city which only adds to its beauty.

The city is also on the Brazilian coastline following the shores of the beach of Cao Morto. Interestingly enough, the surrounding geography also has hillsides that people can hike around, like the Saco do Mamangua. Additionally, there are plenty of mangrove forests and opportunities to go around boating in the surrounding beaches.

Rio de Janeiro is the single most popular city in Brazil—known throughout the world as the city where the 2014 FIFA world cup was held. A lot of money was spent on Rio during the world cup and these funds basically transformed the city to make it a thriving hub of tourism for visitors from around the world.

Among the other places that I’ve listed Rio definitely has to be one of the best, offering the most entertainment and cultural value. With monuments like Christ the Redeemer and places like the Sugar Loaf and the Copacabana Beach, there’s something for everyone in Rio. Interestingly enough, Rio is also the one city where the state’s spent a lot of money on eco-preservation, setting up botanical gardens in the city that give you a taste of the natural beauty in Brazil without leaving the city.

The city’s also really well developed, widely recognized as one of the major commercial centers in the country. If you’re looking to live in comfort with all the amenities of a modern-day city, Rio de Janeiro is definitely the place to visit.

This city is the prized gem of all the tourism coming through Brazil. Fortaleza is built along 30 kilometers of beaches offering vigorous nightlife and some of the most beautiful coastal views you’ve ever seen. There are ten different beaches on the coastline of Fortaleza, mixed with Aquatic parks and world-class eateries.

A lot of public and private investments have been diverted to the city over the past few years, which has led to Fortaleza becoming a tourist hub for people around the world. A lot of European and American airlines have decided to fly to the city as well, which is adding to the hype surrounding this region.

While central Fortaleza is already a fairly well-developed region, the city’s slowly expanding along the coast as people begin buying beach villas here. Compared to property in other areas of Brazil, the villas along the coast of Fortaleza are highly prized amongst investors owing to the fact that these areas are still relatively unexplored. I’m working with one of these developers myself, who’re selling fully-furnished, luxury turnkey beach villas for as low as $107,000.

At this moment, Brazil and Fortaleza are the places to invest in if you’re looking for a vacation home or if you want to make a profitable investment. While most of the cities in this list have lost some of their novelty and charm, the coastline along Fortaleza has retained much of its beauty because the population has concentrated in certain geographical points. You should get in touch with the people over at The Beach Villas to see what you need to do to get your hands on this prime real estate in Fortaleza. Also, if you would rather email them, please do so HERE. or call them at US telephone at 203-599-1835.

I hope you enjoyed reading: The Top Destinations to Visit in Brazil.  If you have any questions about Brazil, please contact our office HERE.

I would also like to offer you some great new articles about Brazil, I know you’ll love them!

Reading Just One Document Convinced Me to Move to the Island of Tonga!