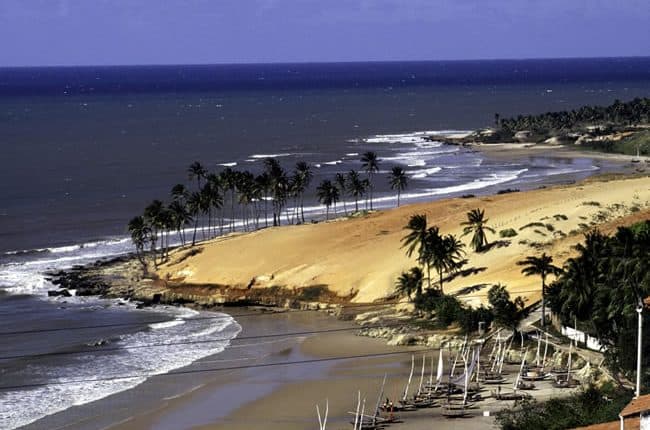 Fortaleza is one of the most beautiful vacation spots in Brazil. While it’s not one of the most frequently visited regions in the country, these trends are changing even as I write. Considering how it isn’t frequented by tourists, much of the cultural and natural value of the region is as yet unmarred by the hand of countless visitors. While I believe that tourism is great and there should be as few restrictions to travel as possible—I have to admit that crowds do take away from the charm offered by any one location. Fortaleza, as one of the few places in Brazil that have a majority native population, is definitely considered as one of the locations that have retained much of their original beauty.

Since there’s little known about Fortaleza and the tourist attractions in the region, I felt that it’s only right that someone writes a detailed guide for new visitors. Rest assured, if you plan to visit Brazil any time soon, you won’t be disappointed when you hit the sands along the coastline that Fortaleza occupies.

The Historical Development of Fortaleza

Fortaleza has quite a rich history that’s traced all the way back to some of the first Portuguese settlements in the region. The city is the capital of the Brazilian state of Ceará, and was the center of all the administrative control exerted over the region under the Portuguese regime. For the most part, the region was under Portuguese control, which managed much of its urbanization and the existing architecture— which would account for the cultural vibrancy of the city.

The city was originally founded in 1630 when the Portuguese built a fort called the Fortress of Our Lady of Assumption, leading to the development of a surrounding town which became Fortaleza. If you look closely, the name does seem like a derivation of the term “fort.” Under Portuguese control, Fortaleza was the site of many political struggles including a slave uprising and was one of the first places throughout Brazil to abolish slavery in the country.

It wasn’t until the 1980’s and the 90’s that the city truly became a tourist attraction with greater investments—but still remained relatively isolated because of its remoteness. However, in recent years, with dedicated efforts put in by the government of Fortaleza, it has become a place for tourists to vacation and invest to make it a nascent, yet thriving tourist hub.

What Can You Do in Fortaleza?

Fortaleza has plenty to offer to tourists—the place has beautiful beaches, a thriving nightlife, flavorful cuisine and has plenty of places that you can visit. The best time of the year to visit definitely has to be between the months of January and June, that’s during the monsoon season when Fortaleza is the most beautiful. Some of the places all first timers should visit include:

This place is basically the center of art and culture in Brazil. It’s a huge area that has cinemas, museums, places to eat and other forms of entertainment for tourists who’re looking to learn about art in Brazil. In specific, there are two museums that form the centerpiece for the Dragao do Mar Center of Art and Culture:

The museum of contemporary art has been a tourist favorite ever since it was established in 1999. If you’re looking to understand the artistic vision and message of the artist in Brazil, this is where you go. The museum is a repository for the entire historical development of artistic expression in the country and is one of the most wonderful places to visit on your trip.

The government of Brazil set down the foundations for this place as an attempt to maintain the cultural values of the country. It’s something of a novelty because there are few museums in the world that have documented evidence of the cultural and historical development of a nation in the way that this museum does.

The Cuisine in Fortaleza

If there’s one thing about Brazil that you can only find in Brazil, that’s the local cuisine. Brazilian flavors are unmatched by any other food from any other culture—mostly because very little of it found its way around the world.  If you’re in Fortaleza, you should really try out the food.

These guys have their own versions of barbecue which sets Brazilian cuisine from foods made in cultural food—dishes called Churrasco and Farofa. Then they have these indigenous ice cream flavors made out of native Brazilian fruits and you’ll find that a lot of Brazilian restaurants serve dishes from around the world with a unique Brazilian twist.

I saved the best for last—the Fortaleza coastline. The reason why the Portuguese set up a fort in this location was the access to river networks and the sea—giving them a vantage point to scout intruding European explorers. Fortaleza is stretched across nearly 30km of coastline with some of the most beautiful beaches in the country.

There are over ten beaches around the coastline each built with state-of-the-art infrastructure to enhance the Brazilian experience. The area is interspersed with aquatic parks, filled with white sand and blue oceans that really give a Caribbean vibe to the region. It’s a mark of how many people love the Brazilian beach that private beach villas have become a common occurrence throughout the region.

Some of the more popular beaches where people are choosing to build homes lie along the northeast coastline that’s about ninety-minutes outside of the city. Much of this land is untouched and the government’s allowing people to develop real estate here to revitalize the city. It’s no surprise that investors are flocking to the area, considering the fact that these houses cost $97,000 and most of them are turnkey—fully furnished for an extra $10K.

Fortaleza offers a vacation experience that very few places on earth can offer. Ever since people started developing real estate along the untouched coastline, investors and tourists alike are trying to get in on the action to make money and relax at the same time. The moment’s not far away when Fortaleza becomes one of the largest hubs of tourism along the way and becomes home to some of the most expensive real estate in the world.

We are working with an amazing developer in Fortaleza, Impar Engenharia Ltd. (www.imparengenharia.com.br) and if you’re interested in investing in building a beautiful beach front villa, you should get in touch with my associates over at The Beach Villas. They’re selling turnkey beach villas with dazzling views of the sea, fully furnished, spacious and with private pools.

I hope you enjoyed reading: A Travel Guide to Fortaleza. Here are a few additional articles that I know you’ll love about Fortaleza and Brazil.