The Straits Of Gibraltar - Escape Artist 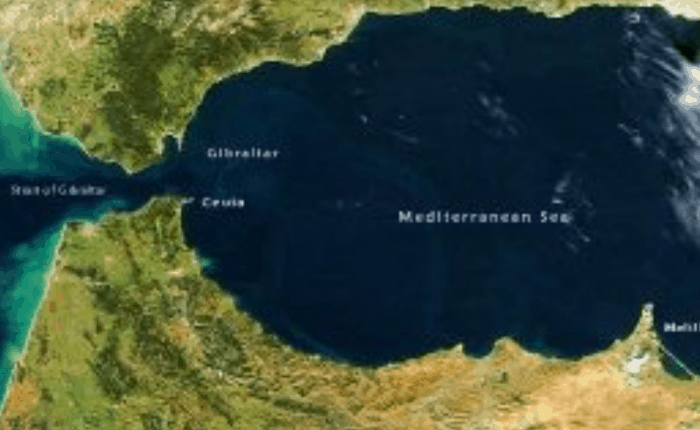 Ceuta, Spanish Morocco.  The Greeks called them “The Pillars of Hercules,” pushed apart by their legendary hero to link the Atlantic with the Med on his way to perform one of his Twelve Labors. A monument here commemorates the myth. 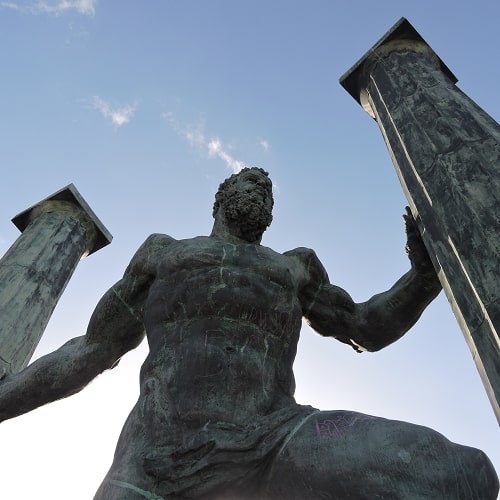 From here you can easily see the famous Rock looming across the straits, even through the fog. 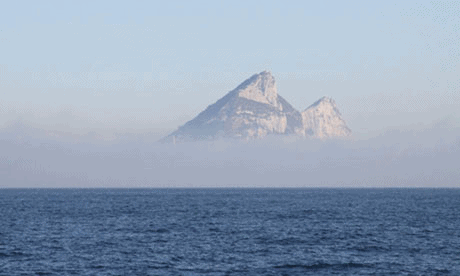 That was where the Moslem invaders from Africa aimed for in the year 711, led by their general Tariq ibn Ziyad. Their invasion successful, the invaders named the Rock Jebel Tariq – the Mountain of Tariq – in his honor. When the Christian knights of Castile finally kicked the Moslems out in 1462, they gave the Rock its Spanish pronunciation, Gibraltar.

The great historical irony is that The Moslem Conquest of Spain – which could have been the Moslem Conquest of All Europe (had not Charles Martel defeated the invaders at the Battle of Tours in 732) – was made possible by a Christian traitor, the ruler of Ceuta at the time.

Ceuta (syoo-tah) is a tiny place of 7 square miles and an ancient history.

It was established as a trading center by the Phoenicians around 500 BC, part of the Phoenician Empire of Carthage, then part of the Roman Empire, becoming an important Christian center in the 300s. With the Fall of Rome in the late 400s, it became an outpost of the Orthodox Christian Byzantine Empire, retaining its original Phoenician name of Abyla.

The aboriginal inhabitants, who’ve been living in North Africa for 10,000 years – the Greeks called them barbaroi and are known as Berbers – adopted Christianity, first the Roman version then the Byzantine. St. Augustine’s mother, Monica, was a Berber.

Then in the late 600s, Arab armies swept across North Africa with their invention of “Islam” (“Submission” in Arabic) as the rationale for conquest. By 710, there was only one Christian city left unconquered – Ceuta, ruled by a Berber Byzantine Christian named Julian.

Meanwhile, across the Straits in Europe lay Hispania, ruled by a Germanic tribe called Visigoths who had adopted Roman Catholicism. The Moslem Arabs and the Berbers they had converted hungered for more conquest. So they made a deal with Julian. If he would help them invade Hispania, they would leave Ceuta alone.

Thus, it was the ships of the Byzantine Christian, Julian, that carried the Moslem army of Tariq ibn Ziyad across the Straits to conquer Roman Christian Spain.

The Christian Berbers of Ceuta became dhimmis, of course, second-class subjects to Moslem overlords, but they maintained their religion until they welcomed Ceuta’s seizure by the Portuguese in 1417. 250 years later, so many Spaniards were living there (and few Portuguese), that Portugal ceded Ceuta to Spain in 1668. It’s been Spanish territory every since.

That’s why Ceuta is part of Spanish Morocco. For it turns out that there are four other tiny Spanish enclaves on the Mediterranean coast of Morocco. Collectively, they are known as the Plazas de Soberanía, “places of sovereignty.” 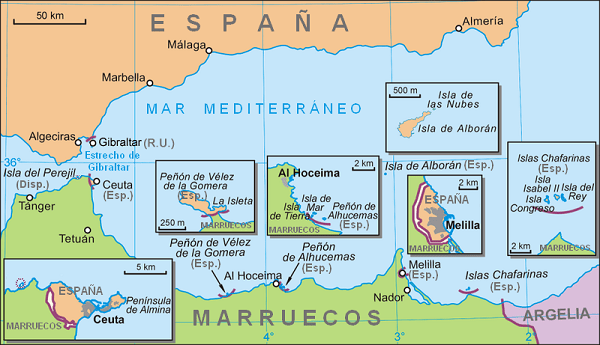 The earliest acquired in 1497, Melilla, is today a fully functioning city of 80,000, about the same number as Ceuta but smaller in size at only 4.7 square miles. The other three are military garrisons: Islas de Alhucemas since 1559, Peñón de Vélez de la Gomera since 1564, and Islas de Chafarinas since 1847.

All five are a part of Spain, governed from Madrid, and belong to the European Union. They drive Morocco crazy, with Rabat always fulminating against these “colonies of Western imperialism” infesting their sacred shore and demanding their return.

Of course, talk of “return” is silly as they all existed as Spanish way before, centuries before, the creation of Morocco as an independent country in 1956.

The hysterical colonial hypocrisy, however, belongs to Spain in its constant caterwauling over British Gibraltar.

I began this essay on the African side of the Straits of Gibraltar, and now I’ve taken the ferry across to finish it on the European side.

At the start of the 18th century, the kings of Europe got into this massive butchery called The War of Spanish Succession, with the Sun King Louis XIV fighting to control Spain against Austria, England, Prussia, the Dutch, and others.

Louis lost. He had to sign the Treaty of Utrecht in 1713, in which he and his grandson, Spanish King Philip V, ceded Gibraltar to England.

Louis died in 1715, so on his own in 1727, Phillip tried to seize Gibraltar from the Brits. It ended badly. 5,000 Redcoats held off 25,000 Spanish troops until the latter gave up after five months.

52 years later, Philip’s son Charles III tried again, figuring England was too bogged down fighting America to protect the Rock. In 1779, he and his French allies launched The Great Siege of Gibraltar. It is an incredible saga of British fortitude and heroism, best told by a young soldier participant in his classic: A History of the Siege of Gibraltar by John Drinkwater.

The saga comes alive when you walk through the tunnels the Brits dug through the Rock with their cannon emplacements. You peer below, looking down where the Spaniards and French were vainly dug in – and where there is now an airplane runway stretching across the isthmus. 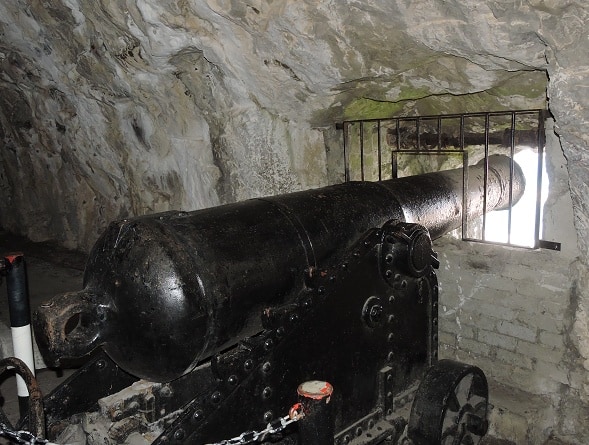 That patch of green, the town and hills beyond, is all Spain.

The Spaniards and French gave up in defeat in 1783, and the British have kept it without real threat ever since – even though the Spanish never stop complaining, with the Gibraltarians never ceasing to reject their complaints.

Besides the hypocrisy of bitching about the Brits having a “colony” on their land while they have one within sight of Gibraltar, along with four others on Moroccan land, here’s why that complaining is so idiotic: 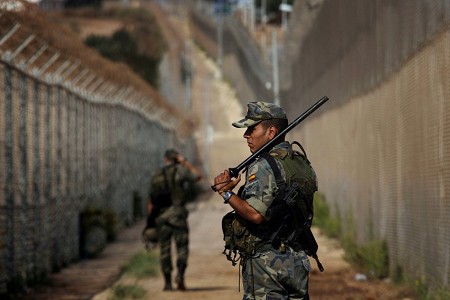 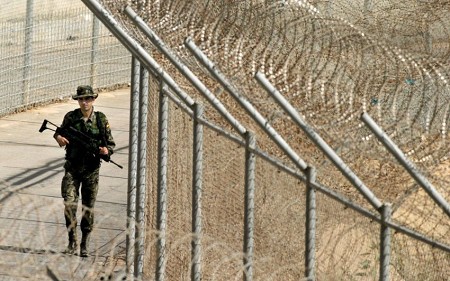 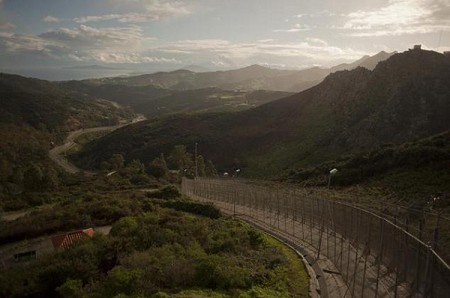 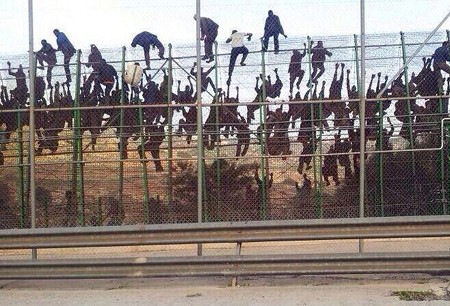 These are the border fences Spain has had to build and guard as countless thousands of African Moslems try to illegally get into Ceuta and Melilla so they can claim “asylum” and get on  Europe’s Welfare State Gravy Train.

In their Spanish Morocco, Spain has America’s border problem with Mexico on stilts and steroids.

Gibraltar has less of a problem, because crossing the Straits is a rough and dangerous ride. Many drown and die, while British patrol boats fish those who don’t out of the water and return them to Morocco: 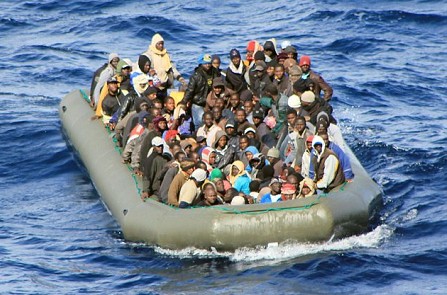 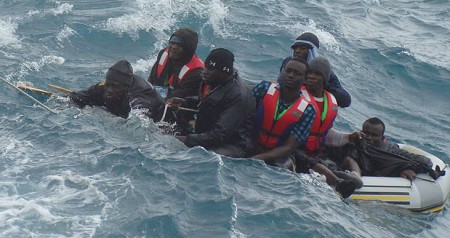 Nonetheless, the British press eggs this on just like America’s. The London Daily Mail is always running stories like how “migrants” from Africa “seeking a better life in Europe” went berserk during bad weather in the Straits, murdering ten and tossing eight babies overboard.

Currently, the Spanish government’s latest provocation is to stymie an EU deal on Brexit as ransom over Gibraltar. PM Theresa May is insistent that “Gibraltar will leave the EU at the same time and on the same terms as the whole of the UK.”

The Brits are becoming increasingly infuriated over Spain’s vulnerable obduracy. There is a growing demand for Gibraltar to have its own Member of Parliament. 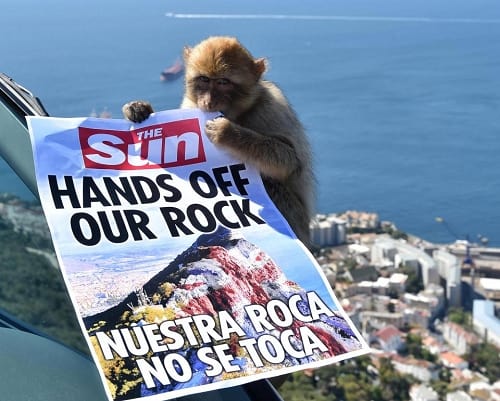 The day may not be far off when PM May publicly explains to Spain:

“You must stop your provocations.  They are ‘not worthy of a democracy,’ as Lord Admiral West has argued.  Start cooperating with us instead.  Here is what I propose: Spain recognizes the legal status of self-governing Gibraltar as a British Overseas Territory, and Britain recognizes your sovereignty over Ceuta and Melilla (although the purpose of the other three Plazas is frankly unclear.)

Do this, and we will further support and substantially assist your efforts to preserve Ceuta and Melilla from the on-going African invasion which is certain to eventually destroy them both.  You need us, and desperately.  So start cooperating and stop provoking.  If you don’t, there will come a day when the British Government will want to talk with Morocco about those Plazas of yours on their coast.

I wouldn’t want that to happen.  Ceuta is a beautiful place with an extraordinary history.  It is a part of Europe. Work with us to keep it, and Melilla, that way.”

Ceuta is charming. The streets are lined with oranges, the beaches are gorgeous. The people are friendly and peaceful. Ceuta has a Christian heritage 16 centuries old. It deserves to remain Christian. 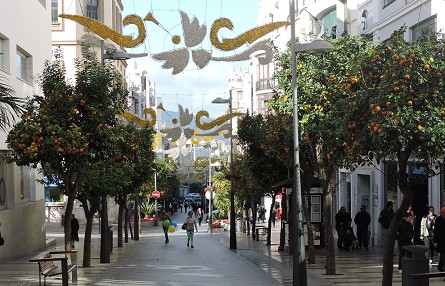 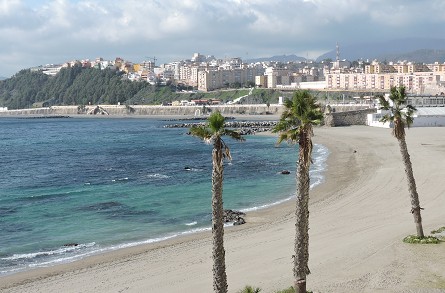 Gibraltar is also charming – plus it’s booming and bustling with prosperity and energy. It is a very special place with a proud people determined to maintain its British uniqueness.

Part of that uniqueness is the monkeys – 300 Barbary macaques that roam the Upper Rock – the only wild monkey population on the continent of Europe. They are cool to watch and indifferent to humans – although I swore this guy was posing for me: 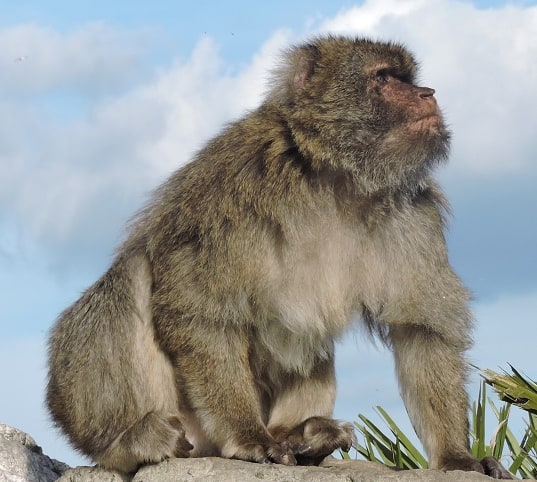 He’s as proud as any Gibraltarian.

I would encourage Escape Artists to consider visiting Gibraltar. How about this for an enticement? On New Year’s Day, January 1, 2018, Gibraltar adopted a Digital Ledger Technology (DLT) Regulatory Framework, becoming the world’s first jurisdiction legally authorizing blockchain distributed ledger technology – and thus cryptocurrencies – for payments, transactions, and other financial or banking services.

Combine that with Gibraltar’s legal system independent from the UK with corporate tax incentives and relaxed regulations unrivalled by others in the EU. Escape Artists are welcome here!

There is a castle fortress built by the Moslems over a thousand years ago to ward off Christian attempts to retake the Rock. Today, the British flag flies proudly over it.  For Gibraltarians, it is a symbol of a Western Christian triumph over Islamic imperialism – and a British triumph over Spanish imperialism. 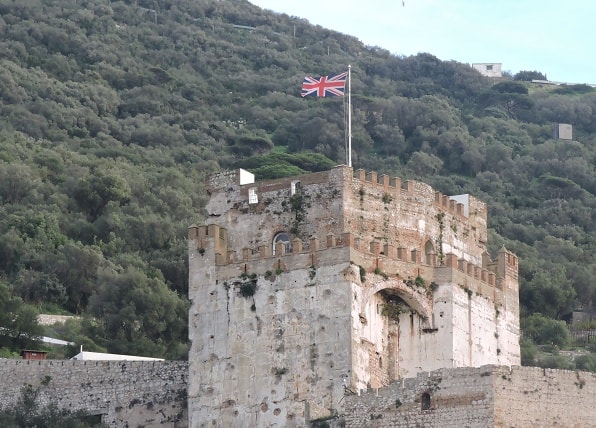 May that flag fly there for many years to come, and may the Rock remain a bastion of freedom, prosperity, and Western Civilization.

I hope you enjoyed reading The Straits Of Gibraltar. If you would like additional information, please contact our office HERE.

5 Simple Ways to Save Money When Studying Abroad